Nominal wages have risen at a 2.2 percent annual rate over the last quarter.

The establishment survey showed the economy adding 151,000 jobs in October, the biggest rise since May.  The 159,000 increase in private sector employment was the second-largest monthly rise of the recovery.  Although the rate of job growth is about 50,000 more than is needed to keep pace with the growth of the labor force, the employment-to-population (EPOP) ratio still fell by 0.2 percentage points to 58.3 percent.  This is just above the 58.2 percent low reached in December of last year.

Other data in the household survey suggest that there is continuing weakness in the labor market.  The percentage of the unemployed who voluntarily quit their jobs, a sign of confidence in the labor market, increased 0.4 percentage points from the low hit in September, but the 5.8 percent October level still makes October one of the lowest months in the downturn.  The number of involuntary part-time workers fell by 289,000 from September, but at 9,047,000, it is still more than 300,000 above the August level.

The unemployment-duration measures all showed modest increases, but are still below the peaks hit last summer.  This likely reflects people who gave up looking for work once their benefits expired.  The number of discouraged workers is running more than 400,000 (50 percent) above its year-ago level.

The story in the establishment survey is somewhat more encouraging.  As previously mentioned, the pace of job growth is about 50,000 above what is needed to keep even with the growth of the labor market.  At this rate it would take more than 15 years to make up the job shortfall from the downturn, but at least the economy is moving in the right direction.

The job growth was concentrated in a relatively small number of sectors, which does raise concerns as to whether it can be sustained.  Education services added 19,200 jobs, more than twice its average over the last year.  The addition of 24,400 jobs in restaurants brought the 3-month increase to 85,000, the best performance since the period from October of 2006-January of 2007.  Such gains could be reversed in future months.

The 29,400 job gain in employment services is more encouraging.  With an upward revision to the September data, job gains in this sector have averaged 30,200 in the last two months.  This is a positive sign, since temporary employment can be a precursor to permanent employment.  However, this job gain is still low compared with the 73,900 monthly growth rate between October 2009 and January 2010. 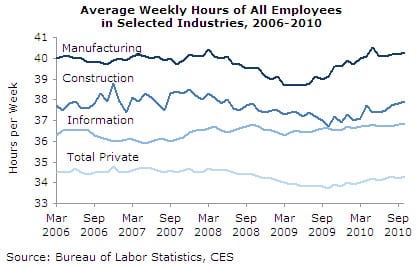 The average workweek increased by 0.1 hours, reversing a September decline.  This is an important series to follow, since it has implications both for the theory that structural factors are responsible for high unemployment and also the claim that uncertainty is discouraging firms from hiring.  In both cases, average hours should rise.  In the first case, because firms are unable to find the workers with the skills they need; in the second, because firms are meeting their demand for labor by working the existing workforce longer rather than accepting the commitment associated with hiring new workers.

The actual pattern shows a modest uptick in hours, but we are nowhere close to the pre-recession levels.  Furthermore, the big gainers are manufacturing and construction, not sectors thought of as being the center of the high-skill economy.

On the whole, this report should be viewed as positive, but it is not clear that even this modest rate of job growth will be sustained.  Government employment will be a drag on growth, and some of the sectors showing strong growth may have reversals in future months.

Dean Baker is the co-director of the Center for Economic and Policy Research (CEPR).  He is the author of False Profits: Recovering from the Bubble Economy.  He also has a blog Beat the Press, where he discusses the media’s coverage of economic issues.  This article was first published by CEPR on 5 November 2010 under a Creative Commons license.