The Consumer Price Index rose 0.2 percent in October as the inflation in the price of energy rebounded to 2.6 percent in the month.  The overall price of core consumer goods and services remained virtually flat for the third consecutive month.  Over that time, the core rate of inflation has been only 0.2 percent, annualized.  In the last twelve months, core inflation has run only 0.6 percent.

Rent and owners’ equivalent rent, which together compose 40 percent of the core index, rose 0.1 percent in October.  Over the last six months, each has run at a 0.6 percent annualized rate of inflation while core, nonshelter prices rose at a 1.0 percent annualized rate.  This very low rate of inflation in rent prices has been very consistent for a year and a half now.  Rent prices have not moved more than 0.1 percent in either direction since March of last year. 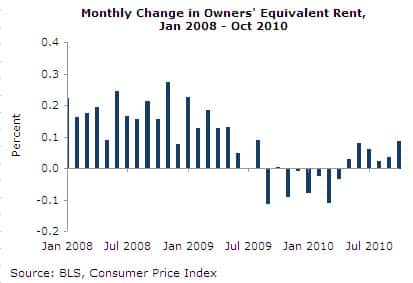 The price of used cars fell 0.9 percent in October — the second consecutive month of falling prices and the fourth consecutive month of deceleration.  Used car prices have now fallen at a 3.4 percent annualized rate over the last three months.  As noted last month, it appears that the market for used cars has rebounded from the effects of the cash-for-clunkers.

Elsewhere in core prices, apparel prices fell 0.3 percent in the month.  Since July, apparel prices have fallen at a 4.4 percent annualized rate, compared to a 6.6 percent annualized rate of increase from April to July.  Prices also remained flat or fell in recreation, education and communication, and other goods.  Together, all these categories of goods compose about one-quarter of the core CPI.

Core producer prices in finished goods fell 0.6 percent in October.  While this rate of deflation is unlikely to persist, these goods have seen very mild inflation over the last year, increasing at a 2.2 percent rate.

After a 0.5 percent fall in September, producer prices of crude goods grew 4.3 percent last month.  In large part, this was due to a rebound in energy prices.  Core crude producer prices grew 2.1 percent in October compared to falls of 4.1 and 5.5 percent the previous two months.  While these prices are rising rapidly, this largely reflects recovery from the steep fall in prices during the second half of 2008 and early 2009.  For example, the price of aluminum base scrap has grow 35.1 percent in the last year, but remains more than 12 percent below its peak in 2008, and more than 2 percent below its level four years ago.  Overall, crude nonfood nonenergy prices are 10 percent below the levels of mid-2008.

The dollar fell 2.6 percent in October.  After a brief spike amid the onset of the financial crisis, the dollar has fallen 12 percent.  With that fall, U.S. exporters have been able to offer lower prices in other countries while still charging more dollars for their goods.  Consequently, nonagricultural export prices rose 0.7 percent in October.  Since the recent peak in the dollar in March of 2009, export prices have risen 6.9 percent.

Similarly, importers have seen prices rise even as foreign producers have been able to cut prices when measured in their own currencies.  Nonfuel imports rose 0.3 percent in October and 4.0 percent since March 2009.  The rise in both import and export prices have been broadly-based, although the rate of inflation for imported capital goods has slowed since August.

If Europe can manage to keep its financial affairs in order and there is no crash of the euro, domestic consumers will switch from imports to demanding relatively inexpensive domestic goods.  At the same time, foreign consumers will demand U.S. production.  The increasing dollar price of trade with the United States will be a much-needed boost to American producers, increasing income and national savings.

David Rosnick is an economist at the Center for Economic and Policy Research in Washington, DC.  This article was first published by CEPR on 17 November 2010 under a Creative Commons license.