The low rate of inflation in the CPI has come with low and falling core prices.  The core index also rose 0.1 percent in November and at a 0.7 annualized rate since August.  Over the last three months, prices have fallen in apparel (3.1 percent annualized), recreation (1.4 percent), education and communication (0.2 percent), and other goods and services (0.6 percent).

Falling prices in household gas and electricity have kept housing prices down.   Also leading to low housing inflation, prices for lodging away from home fell 1.2 percent in November.  These prices have now fallen at a 9.1 percent annualized rate over the last three months after a brief rise earlier this year.

The price of new vehicles fell for the second consecutive month — 0.4 percent — and has now declined at a 1.7 percent annualized rate over the last three months.  The price of used vehicles also fell for the third consecutive month after recovering from the tight market post-cash-for-clunkers.  Despite the sharp rise over the last year, used car prices are roughly back to where they were in 1994. 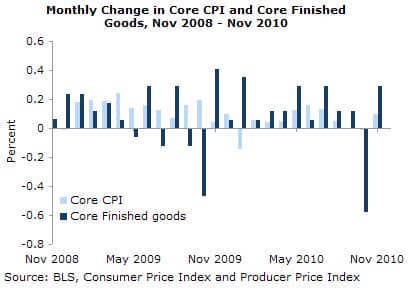 In recent months, inflation in core producer prices have varied by stage of production.  The core finished goods index rose 0.3 percent in November, following a 0.6 percent fall in October.  The price of core finished goods has otherwise risen steadily at a 1.3 percent rate over the last 12 months.  As with imports and exports of industrial supplies, inflation in core intermediate goods has resumed — growing at a 5.9 percent annualized rate over the last three months compared to -3.0 percent for the three months ending in August.

The low rate of core inflation in both producer and consumer prices is liable to remain.  Even if rents continue their slow acceleration, inflation in rent and owners’ equivalent rent remains low.  If medical prices continue to moderate, there will be very little price pressure in the economy at all.

David Rosnick is an economist at the Center for Economic and Policy Research in Washington, DC.  This article was first published by CEPR on 15 December 2010 under a Creative Commons license.