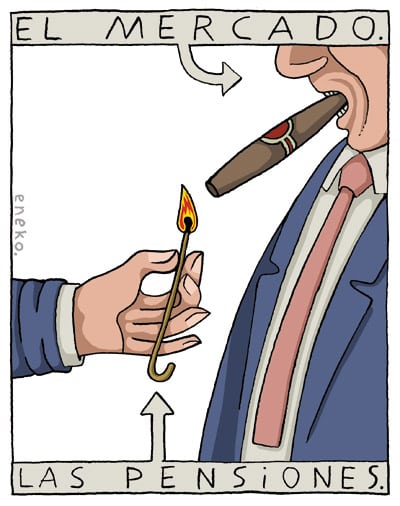 Using pensions to light up the market. . . .

Eneko Las Heras, born in Caracas in 1963, is a cartoonist based in Spain.  This cartoon was first published on his blog . . . Y sin embargo se mueve on 17 December 2010.  Translation by Yoshie Furuhashi (@yoshiefuruhashi | yoshie.furuhashi [at] gmail.com).  Cf. “Further evidence of the relationship between political and economic powers appeared in articles concerning the French President’s brother, Guillaume Sarkozy.  He is not only a textile entrepreneur and the vice-president of the French employers’ association, but also the general manager of Malakoff Médéric.  This mutual insurance company created in 2010 a private subsidiary company (Sevriena) in order to take advantage of the pension reform.  While Nicolas reduces state pensions, Guillaume sells supplementary private pension schemes” (Philippe Légé, “The Struggle Against Pension Reform in France,” Global Labour Column, December 2010).