The Labor Department reported that the unemployment rate fell to 9.4 percent in December.  However, much of the reason for the decline was a drop of 260,000 in the size of the labor force.  The employment-to-population (EPOP) ratio inched up by 0.1 percentage points to 58.3 percent, but it is still 0.2 percentage points below the September level and just 0.1 percent above the low point for the downturn.  The establishment survey showed the economy creating just 103,000 jobs in December.

The 0.4 percentage-point drop in the unemployment rate was the largest since April of 1998, but this decline may just be an aberration.  The 290,000 reported gain in employment reported in the Bureau of Labor Statistic’s household survey is healthy, but inconsistent with so many people leaving the labor force.  It is also worth noting that average weekly unemployment claims are still averaging more than 400,000.  The economy did not start generating jobs at all following the last recession until weekly claims fell below 400,000 in 2003.

The 103,000-job increase shown in the establishment survey in December, along with upward revisions of 70,000 to the prior two months’ data, brings the average monthly gain to 128,000.  This is just a bit more than the 90,000 monthly gain needed to keep pace with the growth of the labor force.  There is little reason to believe that the pace is about to accelerate any time soon.

The big job gainers in December were the health care sector, which added 35,700 jobs, and the restaurant sector, which added 24,500 jobs.  Health care employment has remained consistently strong through the downtown; although the December rate is somewhat higher than the 20,000 monthly pace over the last year.  The jump in restaurant employment is also somewhat above the 15,000 pace over the year.  This could mean slower growth in future months. 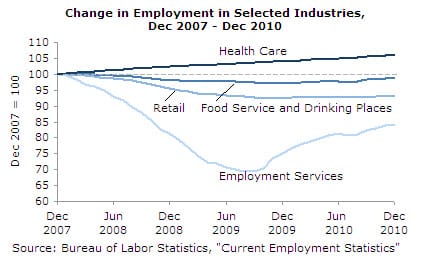 Retail added just 12,000 jobs, not even reversing the 19,400 November decline, suggesting that the October jump was due to earlier than usual holiday hiring.  The employment services sector added 8,300 jobs, far below the 35,000 average for the prior three months.  This does not indicate pent-up demand from employers who waited to hire permanent employees.

Construction lost another 16,000 jobs while manufacturing added 10,000.  Construction is likely to continue to shed jobs at a modest pace while manufacturing adds jobs, but with little net effect on total employment.  State and local governments shed 20,000 jobs in December (all local).  This will be a continuing drag on employment over 2011.  Hours were unchanged overall but fell slightly in manufacturing, providing further evidence against any imminent boost in hiring.

On the whole, this report does not suggest a very positive picture of the labor market going into 2011.  The decline in the unemployment rate is certainly positive, but with EPOPs hovering near their low point for the downturn, the main story appears to be people giving up looking for work.  Furthermore, there is no sector that appears to be experiencing robust job growth at the moment, nor any likely candidates for the near future.

Dean Baker is an economist and Co-director of the Center for Economic and Policy Research, in Washington, D.C.  This article was first published by CEPR on 7 January 2011 under a Creative Commons license.