Critics of the Islamic Republic of Iran held a protest on 25 Bahman 1389 (14 February 2011).  The protest turnout today — far from negligible given the well known severe limits to anti-systemic dissent imposed by the state — apparently failed to meet the expectations of some of its supporters, so one such individual went to the trouble of creating and uploading a fake protest video onto YouTube, adding a voiceover chant of “Mubarak, Ben Ali, Nobat-e Seyyed Ali!” [Mubarak, Ben Ali, now Seyyed Ali’s (i.e. Khamenei’s) turn!] to a video of the Green Wave at its height in 2009.1

The fake video was immediately seen through by viewers, as demonstrated by comments on it: 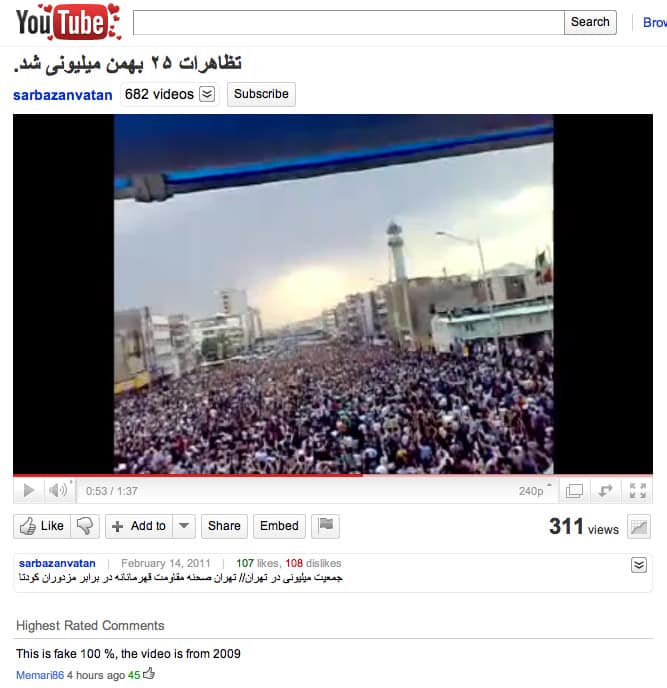 The actual size of the protest may be gauged by the 25 Bahman protest photos published by BBC Persian or the videos posted on the Web site of the Green Path Movement: <www.rahesabz.net/section/29>.  E.g.,

While today’s protest was originally billed by Mir Hossein Mousavi and Mehdi Karroubi as a Green demonstration of solidarity with “people’s movements in the region,” still no solidarity appears to be offered to the Arabs thought to comprise the “axis of resistance.”  Another protest video, said to be shot today, shows anti-IRI protesters — before going on to attack a pro-government boy who tries to take away their banner — chanting: “Na Ghaza!  Na Lobnan!  Tunes o Mesr o Iran!” [Neither Gaza Nor Lebanon!  Tunisia and Egypt and Iran!]:

This world view, also exhibited during the Green protests of 2009-2010, is likely to remain one of the many obstacles internal to the protest movement that prevent the protesters from attracting other Iranians who otherwise share their desire for freedom.

1  In their penchant for tall tales critics of the IRI often resemble hardest-line defenders of it.  E.g., Kayhan claimed that “50 million” — two thirds of Iran’s population — participated in the 32nd anniversary of the victory of the revolution this year: 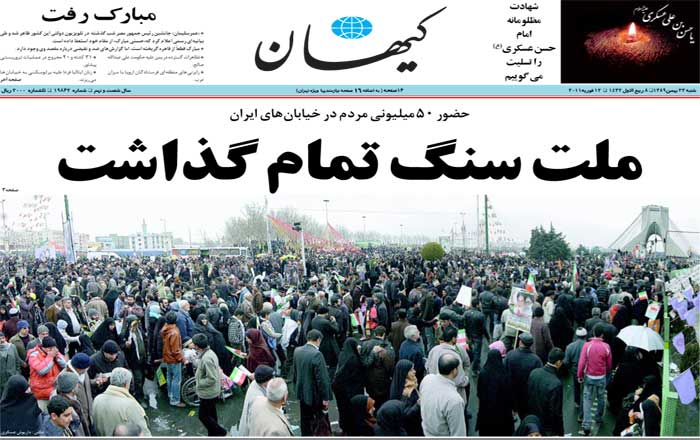 To be sure, the anniversary events nationwide were beautifully staged big pageants a la soviétique. . . .