Transportation prices rose 1.3 percent in the month — assuredly all due to higher fuel prices.  The prices of new and used motor vehicles fell 0.2 percent in January and at a 1.3 percent annualized rate over the last three months.  Public transportation rose 1.7 percent in January, but this high rate was driven by increases in airline fare, again reflecting increased fuel costs.  Over the last three months, airfare prices have grown at a 33.0 percent annualized rate, while the prices of other intercity transportation have fallen at a 0.7 percent rate.

Elsewhere in core goods, the price of apparel jumped 1.0 percent last month (13.3 percent annualized).  Apparel prices are particularly erratic, and over the last six months that category’s inflation rate has been only 0.9 percent.

Education and communication prices continue to be oddly grouped, with inflation in the former (6.1 percent annualized over the last three months) largely balancing deflation (a 3.7 percent annualized fall) in the latter.  Education prices overall have been largely resistant to the broader disinflation and in particular the price of books and supplies has grown at a 5.0 percent rate over the last six months.  Textbooks, being almost exclusively copyrighted, face no real competitive pressure.

The producer price of core finished goods rose 0.5 percent in January, and the data for core producer prices now shows three months of accelerating prices after a fall of 0.4 percent in October.  However, the February report on producer prices included revisions to the 2010 seasonal adjustment factors, and the revisions indicate that inflation in this category of goods has been very stable over much of the previous year. 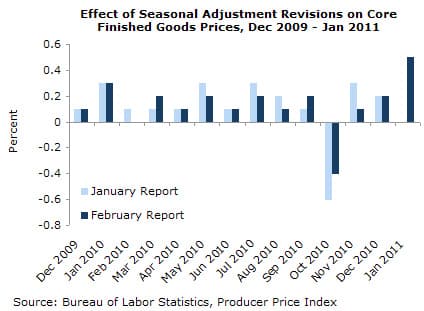 Most of the inflation in core import prices continues to be driven by nonfuel industrial supplies, which account for more than one-fifth of the core index and jumped 2.3 percent in January.  The price of auto vehicles, parts and engines rose 0.5 percent in the month, following a 0.2 percent fall in December.  Over the last 12 months, inflation in this category of imports rose 1.4 percent.

Nonagricultural export price inflation also continues to be driven by industrial supplies, which rose 2.3 percent in January.  Consumer exports account for 20 percent of all exports and have seen relatively low inflation.  Export prices on non-auto consumer goods fell 0.4 percent in January while that of autos rose 0.1 percent.

Finally, the real wage fell $0.01 in January — the third such consecutive fall.  In part this is due to surging energy prices, but even adjusted for core inflation, wages have grown less than 0.07 percent over the last 12 months.

There continues to be little indication of core consumer price inflation within the economy.  Where core prices do appear to be growing, much of the price growth appears to be capturing energy prices.  Though the price of traded intermediate goods continues to rebound, there is little evidence of additional price pressure outside of energy.

David Rosnick is an economist at the Center for Economic and Policy Research in Washington, DC.  This article was first published by CEPR on 17 February 2011 under a Creative Commons license.