Which way to look?  So much was happening inside and outside Germany!  Most dramatic were the revolutionary events on the southern shores of the Mediterranean.  Aside from amazement that those decade-long dictators could be forced out by the will of the people, there were some worries among sun-seeking German vacationers who annually flee the icy waters of the Baltic and North Sea and swarm Tunisian and Egyptian beaches, the equivalent of the Caribbean for some Americans.  But their worries faded next to those of the political leaders of the main parties.  For years they, like the Americans and other Western Europeans, had been so chummy with Mubarak and his ilk!  They had also exported all kinds of military supplies to them, even the water cannons used to knock down demonstrators.  Now they had to do a rapid flip-flop and pretend they had really always favored democracy and human rights.  And the tortures they had so lightly overlooked?  Tortures?  What tortures!  “We wish the new governments well,” they swore, and would gladly advise them all about democracy, all the while keeping to the same crooked Near East policies they had all been so happy with.

Flip-flops were nothing new.  The Social Democrats and the Greens, when in power, had created a new system of jobless insurance and welfare which puts fear into the hearts of all those faced with a loss of their jobs.  The unemployed would not starve, it is true, but could soon lose their apartments, savings, other personal properties, and perhaps be forced into a menial or meaningless job at far less than minimal pay — or lose even minimal benefits.

The German Supreme Court — more human than the one in Washington — had ruled that the amount of benefits granted was not enough to live on decently, especially for children.  The government, while cutting some benefits, decided to grant 5 more euros a month — currently less than 7 dollars.

The Social Democrats and the Greens assumed a defiant posture.  “Not with us!” they declared, as if it had not been their parties which originated this so-called Hartz IV program (named for a VW-backed politician, long since on parole after a bribery scandal).  The government could not get its new rules through the Upper House or Bundesrat without Social Democratic or Green support, so the four parties wrangled for weeks and weeks, while both tried to adapt minimum wage proposals swiped from the Left party.  It is now possible the four will compromise, not at 5 but at 8 euros (11 dollars) monthly.

It is a very open secret: behind the wrangling, never too concealed, was the fact that seven important state elections are due this year and every party wants to be seen as generous, or at least determined.  As for the Left party, the tactic is to act as if it is not even in the running.  After its long inner troubles and quarrels, on top of the vitriolic attacks on it from the outside pillorying its chairwoman for just mentioning communism as a future possibility, it is not in a favorable position, but still hopes to squeeze into two more West German state parliaments in March with a vote over the 5 percent mark.  At the moment it is hovering around 4 percent.  In eastern Germany, with more than 20 percent, it hopes to win second or even first status in two votes.

The first election is due on Sunday, February 20th, in Hamburg, where the Greens and the Christian Democrats had been united in a very uneasy marital relationship ending finally in divorce.  It seems certain that the Social Democrats will win this one; the question is whether they get a majority and can rule alone or only a plurality and have to let the Greens hold a few cabinet posts.  Any victory will help them out of two years of doldrums and miserable poll results.  The Left, it would seem, can again get more than 5 percent in Hamburg.  Nothing is absolutely certain, however. 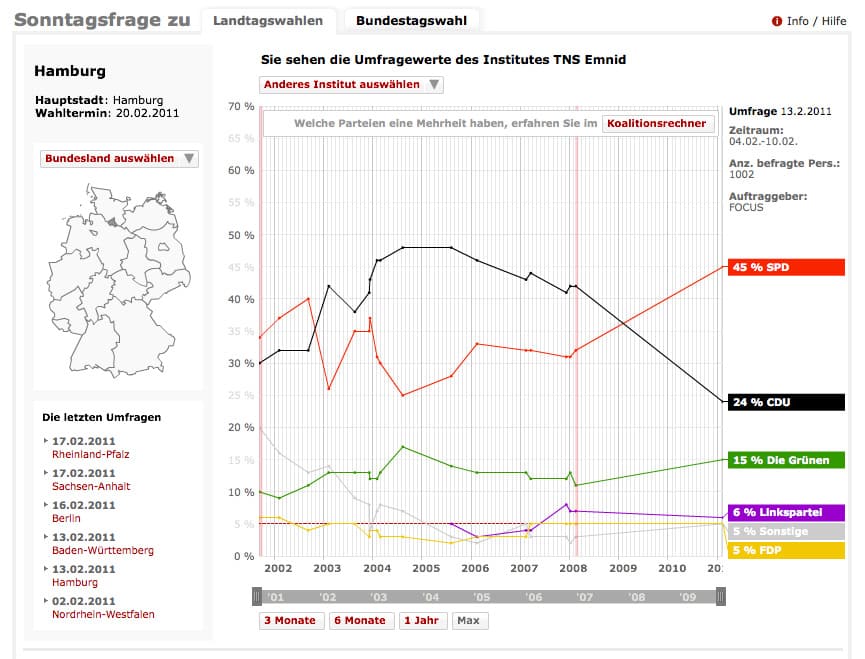 But pity the poor Christian Democrats.  Not only do they have a snowball’s chance in hell in the big port city of Hamburg, but Angela Merkel’s star is generally shining less brightly these days.  And real floundering is being demonstrated by her Defense Minister, Herr Baron von und zu Guttenberg, the handsome young knight in shiny armor from Bavaria who had the highest popularity ratings in all of Germany.  In a previous report some of his recent embarrassments were mentioned; the latest one is bigger yet.  It has been found that his book on political questions, a summa cum laude thesis which got him his doctorate (and that Dr. title is far more important in Germany than elsewhere), contained pages and pages of text copied from other people’s writings while neglecting to mention these borrowings.  Guttenberg quickly flew to Afghanistan to check over the situation there once again.  He has not yet come clean on the growing number of accusations by plagiarized authors.  The professors in Bayreuth University, his alma mater, will take two weeks to decide on the matter.  Even if their knees weaken, a distinct possibility in a case involving so many titles to wealth and nobility, his reputation will never be the same, and he may just have to retire to his ancient castle in the mountains.  This might also affect results for the two allied “Christian” parties in the coming elections.

Happily, there is also another world in the news these days.  The film festival in Berlin is nearing its end; for a week, movie theaters all over town were filled with film lovers, or those who can afford the tickets.  There are not just feature films but documentaries, children’s films, shorts, and others, but the main attention is on films in competition and on stars, old and new.  Among them was an aging but still lively Harry Belafonte, who brought a film of his own.  One poignant angle is that a seat in the jury remained empty; it was for the director Jafar Panahi who is in prison in Iran for six years, with a 20-year ban on filmmaking.  There was a joint demand for his freedom.  Films by four other Iranian directors are also being shown, and so are not a few films from other “developing countries.”

It would seem that none of the offerings have been heaven stormers this year.  One favorite for the Golden Bear, Almanya by two Turkish-German sisters Yasemin and Nesrin Samdereli, however, illustrates life in Germany for Turkish immigrants and their children and life in Turkey for returning Germanized Turks; it’s no angry protest but a fine comedy and perhaps one more answer, like the wonderful scenes from the Arab world, to the ugly racist Muslimphobia which was spread so nastily this past year in Germany and elsewhere.

But the winners are still undecided.  We will know everything by Sunday, as well as the results of the Hamburg election, the first of this year’s important series.  And things keep moving fast down in Bahrain, Libya, and elsewhere.  There’s lots of news to expect; the next bulletin will tell about them.