Over the last half century, the richest Americans shifted the burden of the federal individual income tax off themselves onto everybody else.  The three convenient and accurate Wikipedia graphs below show the details.  The first graph compares the official tax rates paid by the top and bottom income earners.  Notice especially that from the end of World War 2 into the early 1960s, the highest income earners paid a tax rate over 90% during many years.  Today, the top earners pay a rate of only 35%.  Notice also how the gap between the rates paid by the richest and the poorest has narrowed.  If we take into account the many loopholes the rich can and do use far more than the poor, the gap narrows even more. 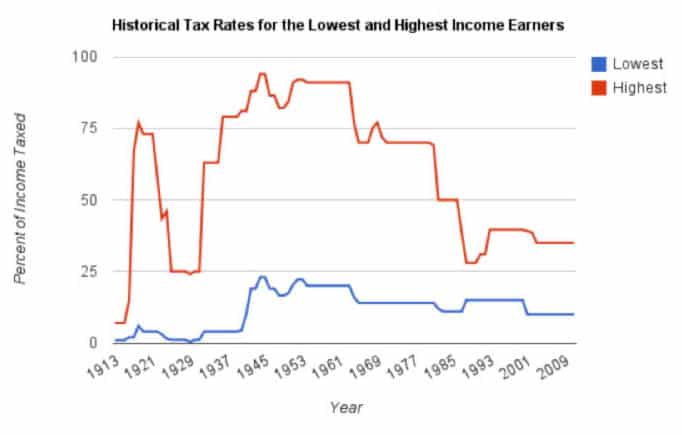 One conclusion is clear and obvious: the richest Americans have dramatically lowered their income tax burden since 1945, both absolutely and relative to the tax burdens of the middle-income groups and the poor.

Consider two further points based on the graph above: (1) if the highest income earners today were required to pay the same rate that they paid for many years after 1945, the federal government would need far lower deficits to support the private economy through its current crisis, and (2) those tax-the-rich years after 1945 experienced far lower unemployment and far faster economic growth than we have had for years.

The lower taxes they got for themselves are one reason why the rich have become so much richer over the last half century.  Just as their tax rates started to come down from their 1960s heights, so their shares of the total national income began their rise.  As the two other Wikipedia graphs below show, we have now returned to the extreme inequality of income that characterized the US a century ago. 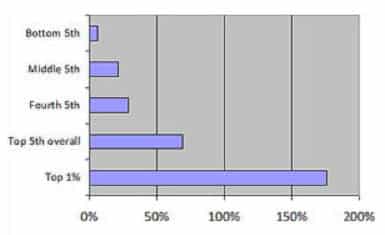 Instead, a rather vicious cycle has been at work here for years.  Reduced taxes on the rich leave them with more money to influence politicians and politics.  Their influence wins them further tax reductions, which gives them still more money to put to political use.  When the loss of tax revenue from the rich worsens already strained government budgets, the rich press politicians to cut public services and government jobs and not to even debate a return to the higher taxes the rich used to pay.  So it goes from Washington to Wisconsin to New York City.

How do the rich justify and excuse this record?  They claim that they can invest the money they save from taxes and thereby create jobs, etc.  But do they?  In fact, cutting rich people’s taxes is often very bad for the rest of us (beyond the worsening inequality and hobbled government it produces).

Several examples can show this.  First, a good part of the money the rich save from taxes is then lent by them to the government (in the form of buying US Treasury securities for their personal investment portfolios).  It would obviously be better for the government to tax the rich to maintain its expenditures and to thereby avoid deficits and debts.  Then the government would not need to tax the rest of us to pay interest on those debts to the rich.

Second, the richest Americans take the money they save from taxes and invest big parts of it in China, India, and elsewhere.  That often produces more jobs over there, fewer jobs here, and more imports of goods produced abroad.  US dollars flow out to pay for those imports and accumulate in the hands of foreign banks and foreign governments.  They lend them to the US government because it does not tax our rich, so we get taxed to pay for the interest Washington has to give those foreign banks and governments.  The largest single recipient of such interest payments today is the People’s Republic of China.

Third, the richest Americans take the money they don’t pay in taxes and give it to hedge funds and stock brokers to make profitable investments.  These days, that often means speculating in oil and food, which drives up their prices, undermines economic recovery for the mass of Americans, and produces acute suffering around the globe.  Those hedge funds and brokers likewise use part of the money rich people save from taxes to speculate in the US stock markets.  That has recently driven stock prices higher: the stock market recovery.  And that mostly helps — you guessed it — the richest Americans who own most of the stocks.  The one kind of significant wealth average Americans own, if they own any, is the individual home.  And home values remain deeply depressed: no recovery there.

Cutting the taxes on the rich in no way guarantees social benefits from what they may choose to do with their money.  Indeed, their choices can worsen economic conditions for the mass of people.  These days that is exactly what they are doing.

Richard D. Wolff is Professor Emeritus at the University of Massachusetts in Amherst and also a Visiting Professor at the Graduate Program in International Affairs of the New School University in New York.   He is the author of New Departures in Marxian Theory (Routledge, 2006) among many other publications.  Check out Richard D. Wolff’s documentary film on the current economic crisis, Capitalism Hits the Fan, at www.capitalismhitsthefan.com.  Visit Wolff’s Web site at www.rdwolff.com, and order a copy of his new book Capitalism Hits the Fan: The Global Economic Meltdown and What to Do about It.