Apparel prices fell again in March.  Though apparel prices are notably erratic, they have been quite stable in recent years.  Since early 2003, apparel prices have never varied from constant by more than 1.5 percent.

Core import prices rose 0.3 percent in March, compared with 0.5 and 0.6 percent the previous two months.  (The BLS index has reported core import prices only since December.)  Inflation in nonfuel imports was higher — 0.6 percent — as the prices of foods, feeds, and beverage imports rose 4.2 percent last month.

The price of capital goods imports fell 0.1 percent in March.  More than three-quarters of this index is nonelectrical machinery, the price of which has been virtually flat for two years.  It should be noted that the general fall in the price of nonelectrical machinery over the last decade is due to falling computer and semiconductor prices — a steady decline of about 45 percent since early 2001.  By contrast, the prices of capital goods excluding computers and semiconductors have risen 1.4 percent per year over that time. 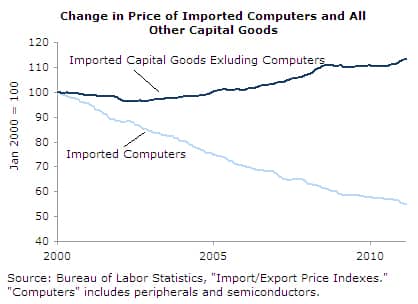 The producer price of crude materials fell 0.5 percent last month, including an 8.2 percent fall in the price of crude fuel.  Core crude prices suddenly fell 2.3 percent in March, but there is not much to be made of this monthly change.  As recently as June and July core crude prices had fallen only to return in the next month.  However, it is possible that these prices have mostly returned to trend and will see somewhat lesser rates of inflation in the coming months.

If this month’s fall in crude energy prices persists, there may be some cooling of headline inflation over the summer.  Regardless, there continues to be little sign of increased pressure within core prices.

David Rosnick is an economist at the Center for Economic and Policy Research in Washington, DC.  This article was first published by CEPR on 15 April 2011 under a Creative Commons license.