Testimony to the House Oversight and Government Reform Subcommittee on TARP and Financial Resources, 15 March 2011

Thank you, Chairman McHenry and Ranking Member Quigley, for inviting me to testify before the subcommittee and to share my views on the debt problem facing state and local governments.  I will make three main points in my comments:

2) The shortfalls facing many state and local pension funds are in most cases manageable; and

3) The valuation method used by most pension funds is appropriate.  The alternative method of assuming a risk-free rate of return on pension assets — even those held in equities — is likely to lead to the end of defined benefit pension funds.  This will increase the cost to taxpayers of hiring public sector workers.

I will address these issues in turn.

The first point is very important for how members of Congress view the fiscal problems facing state and local governments.  This crisis was not due to an epidemic of fiscal irresponsibility infecting elected officials across the country.  Rather, it was attributable to an economic collapse of a magnitude that the United States had not seen since the Great Depression.

As a result of this collapse, output has been roughly 6 percent below its potential since the first months of 2009.  The Congressional Budget Office and other forecasters project that the economy will remain far below its potential level of output for 4-5 more years.  This fall in output led to plunging revenue collection.  At the same time, the sustained rise in unemployment increased demand for a wide range of services provided by state and local government, such as unemployment insurance, Medicaid and other publicly financed health programs, and TANF.

As a first approximation, it is reasonable to assume that state and local government revenue moves in step with GDP, although the revenue falloff was steeper in this downturn than the drop in GDP, because the collapse of the bubbles in residential and non-residential real estate caused property taxes to fall by more than the decline in GDP.  If revenue had maintained its trend growth path, states would be in a very different financial situation today.  For example, the State of Wisconsin would have more than $4 billion in revenue in its 2-year budget.  This would be more than sufficient to eliminate its projected deficit, even before considering the savings on the spending side that would result from a more normal rate of unemployment.

Allowing the housing bubble to grow unchecked was a blunder of monumental proportions, but this was an error made by the Fed and other regulatory bodies, not state and local officials.  It was possible to recognize a dangerous bubble and the inevitable consequences of its collapse as early as 2002.1

House prices had grown far out of line with their historic pattern.  There was no corresponding rise in rents, indicating that the rise in house prices could not be explained by the fundamentals of the housing market.  Similarly, the fact that the vacancy rate was already at a record high in 2002 should have been a clear sign that a shortage of housing was not explanation for the unprecedented increase in nationwide house prices.

This background is important.  Any elected official who saw the trouble brewing on the horizon and tried to prepare for it would not only have had to fend off demands from constituents for lower taxes and better services, they also would have been forced to take on virtually the entire economics establishment.  It is not surprising that few state and local officials were up to this challenge.

If the fiscal crisis facing state and local governments had its origins in Washington, it is reasonable to expect that the solution also lies in Washington.  This could mean aid to state and local governments, which Congress has already provided to some extent, but more importantly Congress and the Fed could act more aggressively to bring the economy back towards its potential level of output.  In order for state and local governments to balance their budgets at a point where the economy is operating well below its potential it is necessary to impose higher tax rates than would otherwise be necessary and/or to cut public services precisely at the time when they are most needed.  In addition to the direct harm caused by these steps, both tax increases and spending cuts will further depress demand, thereby slowing growth and raising unemployment.

If the economy remains severely depressed for a long period of time, then state and local governments will be correspondingly strained.  However, if the economy were to rebound and return to near potential levels of output, then the budget problems facing most state and local governments will be manageable.  This is seen clearly with the pension shortfalls that have been highlighted in recent news reports.

There is a range of estimates of shortfalls using the current methodology, but most put the size of the shortfalls in the range of $600 billion to $1 trillion.  While these numbers sound large, it is important to put the shortfall in context.  These shortfalls need to be made up over the funding horizon for pension funds, which is usually around 30 years.  The shortfalls are between 0.2-0.3 percent of the projected GDP over this period.  It would come to around 1.2 to 1.8 percent of state revenue over this period.  While this is hardly a trivial sum, it is difficult to see this as an insurmountable burden for states to overcome.  By comparison, the increase in annual spending on defense from 2000 to the present was equal to 1.7 percentage points of GDP.

It is also worth remembering that most of the pension shortfalls are attributable to the plunge in the stock market following the collapse of the housing bubble.  Since the market has since regained much of its value, it is likely that much of the reported shortfall will disappear in future reports simply as a result of the rise in the stock market.

It is worth noting that there are pension funds that have been seriously mismanaged and under-funded.  Efforts to restore these plans to proper funding may impose substantial costs; however, such funds are the exception.  Most state and local funds are close enough to being fully funded that the gaps can be closed without imposing major burdens on state and local governments.

Finally, there is a serious dispute as to whether pension funds are using the proper discount rate for their liabilities when they assume the expected return on pensions that are heavily invested in equities, rather than applying a risk-free rate of return as the proper discount rate for their liabilities.  I would argue that, given current price to earnings ratios in the market, state and local pension funds are being prudent to use a discount rate that is based on the expected return to their assets.  Assuming the risk-free rate would likely lead to the elimination of traditional pensions and impose unnecessary costs on taxpayers.

State and local governments are fundamentally different from individual investors.  Individual investors must be concerned that the market could be depressed at the time when they retire or have other reason to need their savings.  For that reason, they do substantially discount the risk associated with the volatility of the stock market.

The logic of using expected values, rather than the risk-free rate, stems from the fact that state and local governments are better able to bear risk than individual investors.  If the market experiences a downturn, as is now the case, state and local pension funds can easily cover their pension obligations from the current funding flows combined with the sale of non-equity assets.  It would take a truly extraordinary set of events (one much worse than the downturn that we are currently experiencing) to force pension funds to liquidate large amounts of their equity investments in a down market.

It is important to note that the expected return on stocks over a long period must be adjusted depending on the current price-to-earnings ratios and the projected growth rate of the economy and profits.  As I previously argued, pension funds were irresponsible in the late 1990s and in much of the last decade in assuming a 10 percent nominal rate of return on the portion of their assets invested in equities.2  This rate of return was not plausible at the time.  However, with the economy-wide ratio of stock prices to after-tax earnings now around 15, an assumption of a 10 percent nominal return is again plausible.  Figure 1 below shows the ratio of stock prices to after-tax profits since 1970.3 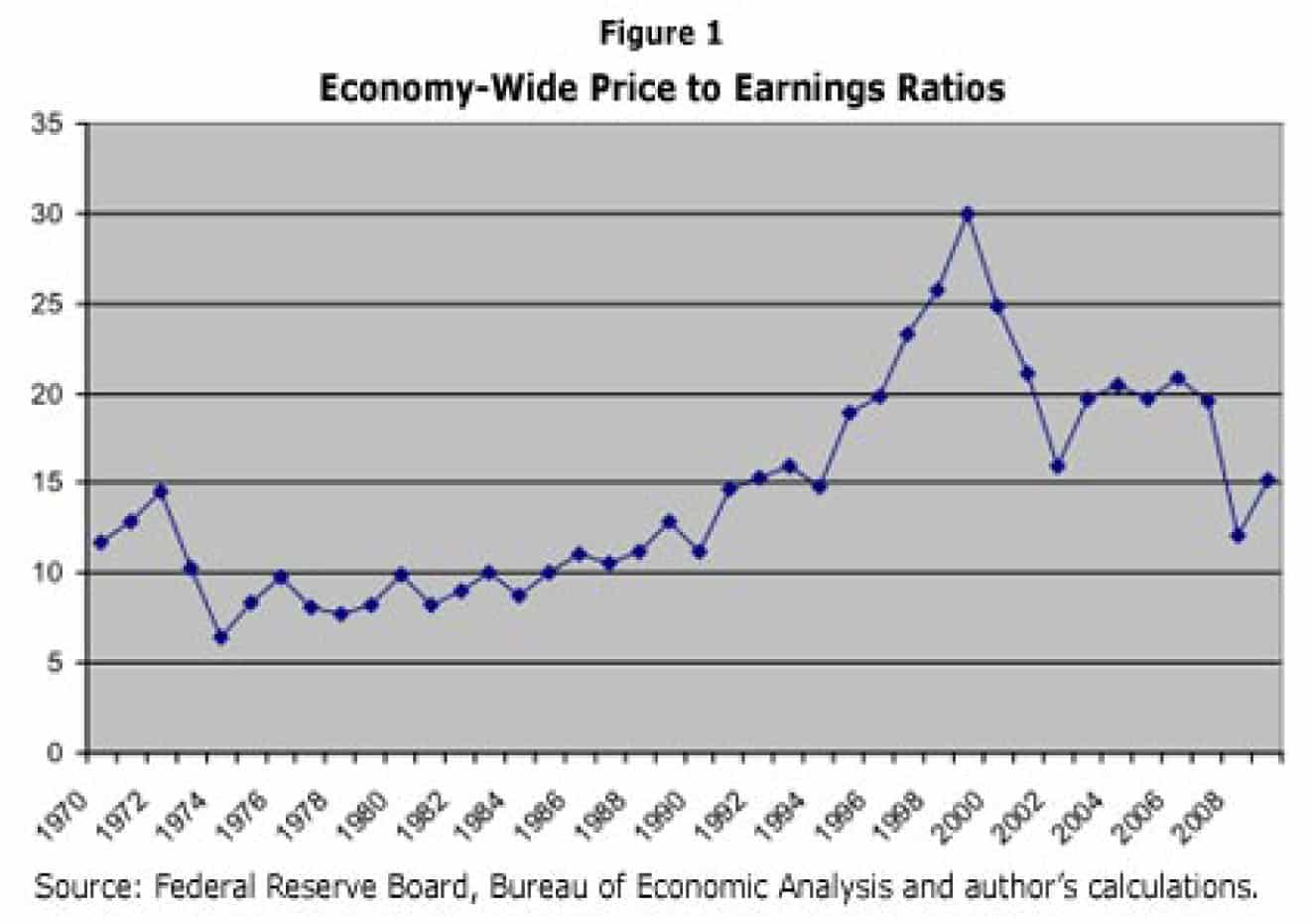 However, we would expect that the assets held by the fund would provide a substantially higher rate of return than the risk-free rate being assumed for assessing funding levels.  This would mean that once the fund had reached full funding levels assuming a risk-free rate of return, much smaller contributions would be needed in future years, since the excess returns from equities could provide much or all of the income necessary to meet funding targets.

In effect, current taxpayers would be paying more so that future taxpayers would pay less.  This would be equivalent to pre-funding the fire department or the schools.  Few policy experts would advocate this course of action.

A second problem arises if pensions use the risk-free rate for accounting purposes, but continue to invest in equities.  The return on equities is more volatile than the return on government bonds.  If pension fund managers are required to effectively assume a risk-free rate of return, regardless of which asset the fund holds, they will feel pressure to shift pension holdings into assets that are less risky.  Why would a pension fund manager want to take the risk of having an under-funded pension, if they will not get credit for the higher expected return associated with holding equities?

Of course, if pensions were invested entirely in bonds, then they would provide a lower return.  The result would be that taxpayers would be forced to pay higher taxes to provide the same level of benefits to public sector employees.  It is difficult to see how this could be a desirable outcome.

Defined benefit pensions are clearly valued by workers, since they would prefer not to take the risk of investing for their retirement on their own.  If governmental units were to no longer offer this benefit, then economic theory implies that they would either have to pay higher wages to get workers of the same quality or would end up with lower quality workers if they continued to offer the same level of compensation, but without a defined benefit pension.4

1  The evidence for a housing bubble is described in Baker, D.  2002.  “The Run-Up in House Prices: Is It Real or Is It Another Bubble?”  Washington, DC: Center for Economic and Policy Research.

3  The numerator comes from the Federal Reserve Board’s Flow of Funds, Table L.213, Line 23.  The denominator is obtained by taking the average share of profits in GDP over the prior decade (NIPA Table 1.12 Line 15 divided by Table 1.15 line 1, multiplied by the most recent year’s GDP).

Dean Baker is an economist and Co-director of the Center for Economic and Policy Research, in Washington, D.C.  The text of the testimony was published by CEPR under a Creative Commons license.  Click here to download the testimony in PDF.