Over the last year GDP has not even grown fast enough to keep the unemployment rate constant.

GDP growth fell from 3.1 percent in the fourth quarter of 2010 to 1.8 percent in the first quarter as car sales advanced at a slower pace.  This slowed the rate of consumption growth from 4.0 to 2.7 percent.  In addition, unusually bad weather slowed construction, which subtracted 0.72 percentage points from growth in the quarter.

The slower pace of consumption growth in the quarter raises serious questions about the strength of the recovery at this point.  Consumption got a strong boost from the uptick in car sales from the extraordinarily low levels earlier in the recession.  While sales may remain near current levels, which are still low by historical standards, or even rise somewhat further, it is unlikely that they will provide the same boost to growth in future quarters.  Even with the slower growth in the first quarter, car sales still propelled the economy as dealers restocked inventories.  GDP, excluding motor vehicle output, rose at just a 0.4 percent annual rate.

Residential investment fell at a 4.1 percent annual rate in the quarter, reversing a modest increase in the prior quarter.  This decline was likely due to the weather; housing construction will likely bounce around its current low level for the rest of the year.  However, the sharp decline in house prices that followed the expiration of the tax credit will likely slow consumption further throughout the year.  The savings rate should be expected to rise back toward its historic 8.0 percent rate (it’s currently at 5.7 percent), as the remaining $2 trillion in housing bubble wealth disappears.

Investment in equipment and software maintained its strong growth, rising at an 11.6 percent annual rate.  Equipment and software investment were equal to 7.4 percent of GDP in the quarter, just 0.5 percentage points below the pre-recession level.  This is remarkably strong given the amount of excess capacity in most sectors of the economy.  It is likely to remain healthy throughout the year as the investment tax credit pulls investment forward; however, it may not sustain its double-digit growth rate. 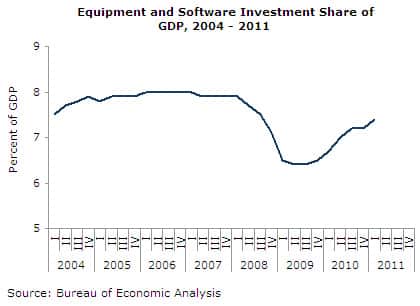 Net exports were a small negative in growth in the quarter after adding 3.27 percentage points to GDP in the fourth quarter, as a 4.4 percent increase in imports outweighed a 4.9 percent increase in exports.  (We import 20 percent more than we export.)  This was largely due to the rebuilding of inventories.

Together, inventories and net exports added 0.85 percentage points to growth in the quarter, after subtracting 0.15 percentage points in the fourth quarter due to a sharp slowing of inventory accumulation.  Inventories are now growing at a normal rate, so, on average, they are unlikely to have a substantial impact on growth in future quarters.

Overall, this report provides serious grounds for concern about the strength of the recovery.  One quarter of slow growth is not by itself cause for concern, but over the last year GDP has grown at just a 2.3 percent rate.  This is below the 2.5 percent pace necessary just to keep even with the growth of the labor force and prevent the unemployment rate from rising.

Furthermore, there is little reason to expect an acceleration of growth in the near future.  Consumption is likely to lag income growth, as falling house prices cause the savings rate to return to a more normal level.  Furthermore, income growth also will weaken as governments at all levels raise taxes and fees and temporary tax cuts expire.  (It’s worth noting that new unemployment claims exceeded 400,000 for the third consecutive week.)  Investment in equipment and software is unlikely to rise much further from relatively high levels, and government cutbacks at all levels will be a further drag on growth.

Dean Baker is an economist and Co-director of the Center for Economic and Policy Research, in Washington, D.C.  This article was first published by CEPR on 28 April 2011 under a Creative Commons license.