The unemployment rate edged up to 9.0 percent in April even as the Labor Department reported that the economy created 244,400 new jobs.  This was the third consecutive month of job growth in excess of 200,000, with an average of 233,000 per month.  All the growth was in the private sector as the government sector shed 24,000 jobs in April.  Private sector job growth averaged 253,000 over this period.

The biggest job gains for the month were in retail (57,100) health care (37,300), manufacturing (29,000), and restaurants (26,800).  April job growth for retail and restaurants was inflated by the later-than-usual Easter.  The increase in retail employment was the highest since the sector added 78,500 jobs in April of 2000.  This will be at least partially reversed next month.

The rise in manufacturing employment is keeping with its average growth of 28,000 in the prior three months, although an increase of 7,200 jobs in food manufacturing is not likely to be repeated.  With average weekly hours flat over this period, the rate of job growth may slip in the months ahead.  The April rise in health care employment followed an increase of 34,400 jobs in March.  This 430,000 annual rate of growth in the sector will not be sustained; we will see slower growth in future months.

The employment services (temps) sector lost 1,500 jobs in April.  This is not a promising sign about future employment trends.  Hourly wage growth edged up slightly to a 2.1 percent annual rate over the last three months.  This compares to a 1.9 percent rate over the last year.  With the recent jump in food and energy prices, this is not sufficient to keep pace with the rate of inflation.

The April rise in unemployment was almost certainly just a measurement error that partially reversed the extraordinarily rapid decline reported in December and January.  Over the last year, the household survey shows employment growth of just 764,000 (adjusted for the change in population controls).  This compares to an increase of 1,313,000 jobs reported in the establishment survey.  We should have expected labor force growth of roughly 1,000,000 over this period.  This implies that the job growth we have seen should have only led to a drop in unemployment of 0.2 percentage points, not the 0.8 percentage point drop we actually saw over the last year.

The employment-to-population ratio (EPOP) shows a much weaker picture, with the overall EPOP actually dropping by 0.3 percentage points since April 2010.  Blacks are not yet seeing any gains from the recovery.  The EPOP for blacks overall hit a new low of 51.5 percent in April, down from the previous low for the downturn of 51.8 percent in September.  The 53.7 percent EPOP for black women is 0.7 percentage points below the prior low reached in March.  The EPOP for black teens has edged up slightly from its low, but at 15.3 percent it is still only around half its 2000 level. 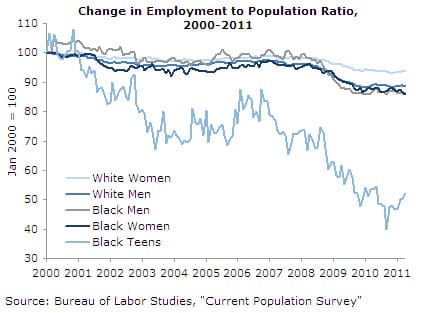 One interesting item in the report is the sharp drop over the last year in the unemployment rate for both construction and manufacturing workers.  The unemployment rate for construction workers fell from 21.8 percent in April of 2010 to 17.8 percent last month.  For manufacturing workers the decline was from 11.1 percent to 9.4 percent, a rate only slightly higher than for the population as a whole.  These numbers undermine claims that the rise in unemployment is structural.

While the April report appears somewhat positive, it does raise questions about the strength of the labor market going forward.  Employment growth for the month benefited from one-time factors that will not be repeated.  With a decline in temporary employment and little change in the average workweek, there seems to be little pent-up demand for labor.  A 242,000 job increase in short-term unemployment, coupled with a big jump in weekly unemployment claims provide additional cause for concern.

Dean Baker is an economist and Co-director of the Center for Economic and Policy Research, in Washington, D.C.  This article was first published by CEPR on 6 May 2011 under a Creative Commons license.