The Case-Shiller 20-City index fell by 0.8 percent in March.  This represents somewhat of a slowing from the prior six months in which the rate of monthly decline averaged more than 1.0 percent.  Nonetheless, the drop pushed the index to a new post-bubble low.  In nominal terms, the March number is 0.8 percent below the previous post-bubble low hit in April 2009.  In real terms, the March number is 5.4 percent lower.

The recent price decline has eliminated almost all of the increase in real prices since the beginning of 2000.  The real value of the 20-City index is now just 5.2 percent above its January 2000 level.  Prices have declined in real terms for 12 of the 20 cities since 2000, with both Portland and Seattle showing gains of just over 1.0 percent for the period.  The biggest losers have been Atlanta, with a real price decline of 25.1 percent; Las Vegas, where prices fell by 26.0 percent; Cleveland at 26.3 percent; and Detroit with a real price drop of 48.9 percent.

In nearly all of the cities the bottom tier of the housing market has performed most poorly since 2000.  This means that homeownership has been an especially bad investment for moderate-income families over this period.  In San Francisco and Tampa, real prices for the bottom third of the market fell by 14.7 percent and 15.1 percent, respectively.  In Chicago, Minneapolis, and Las Vegas the real declines were 33.3 percent, 35.8 percent and 39.2 percent, respectively.  The biggest declines were reported for the bottom tier of housing in Phoenix at 46.6 percent and Atlanta at 53.1 percent.  (Data for pricing tiers is not reported for Cleveland and Detroit because the samples are too small.)

It is important to remember that these figures refer to the drop in real house prices since January of 2000.  This was the early days of the bubble — a point where house prices had just begin to outstrip the overall rate of inflation.  Obviously the drops from the peak in 2006 would be much more severe.

The March data show prices dropping in 18 of the 20 cities.  Seattle eked out a 0.1 percent increase, while prices in Washington, DC rose by 1.1 percent.  Prices are now 4.3 percent higher in Washington than a year ago, the only city with a year-over-year increase.  The biggest price declines were concentrated in the Midwest.  March prices fell by 1.8 percent in Cleveland, 2.0 percent in Detroit, 2.4 percent in Chicago, and 3.7 percent in Minneapolis.

Over the last three months prices have fallen at a 22.5 percent annual rate in Chicago and a 34.6 percent rate in Minneapolis.  In both cities the bottom tier is leading the path down, with prices falling in March by 9.9 percent and 6.4 percent, respectively.  Over the last three months prices in the bottom tier have fallen at a 50.4 percent rate and 55.9 percent in Chicago and Minneapolis, respectively.

While the overall rate of price decline slowed somewhat in this report, it seems virtually certain that prices will continue to decline at least through the rest of the year.  The April data on pending home sales was extremely weak.  In addition, the mortgage applications index for purchase mortgages is hovering only slightly above the levels reached last May, following the end of the first-time buyers tax credit.  This suggests that home purchases are likely to be weak for the near-term future. 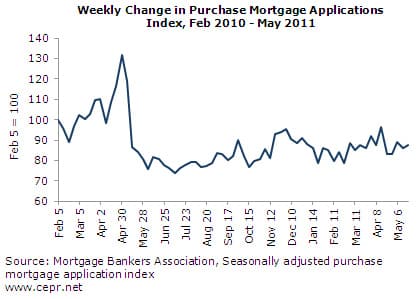 Furthermore, it is difficult to see any set of events that is likely to have much of a positive impact on the housing market.  The FHA has recently tightened its lending standards, which will further limit the demand side of the market.  There is little hope of any sharp uptick in employment, and interest rates are unlikely to fall from current levels.  As a result, prices are almost certain to decline by double digits in 2011.

Dean Baker is co-director of the Center for Economic and Policy Research in Washington, D.C.  He is the author of several books, including False Profits: Recovering from the Bubble Economy.  This article was first published by CEPR on 31 May 2011 under a Creative Commons license.