Venezuela’s central bank (BCV) has released GDP data for the first quarter of 2011.  The report points to an accelerating recovery: GDP grew 4.5% over its first-quarter 2010 level.  However, if we want to look specifically at the first quarter of 2011, we need seasonally adjusted data so we can compare it to the quarter just before it.  The central bank publishes seasonally-adjusted data, but the data is available only through the third quarter of 2010.  There are a few ways we can estimate seasonally-adjusted GDP more recently, using the same adjustment that the BCV uses.1   We can adjust the overall GDP series directly, or for more accuracy, we can adjust the more detailed series of GDP by industry, and construct an overall series from the results.  Figure 1 shows the results of these estimates: first quarter GDP grew by either 9.8% or 9.6% on an annualized basis, depending on which adjustment method we use. 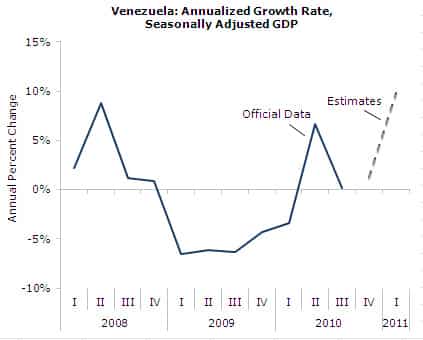 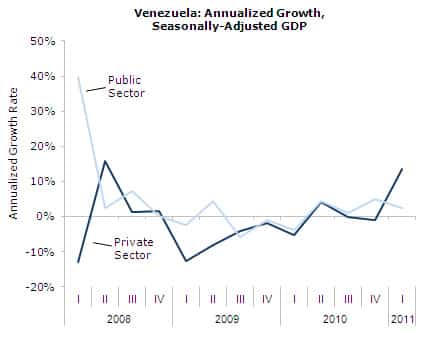 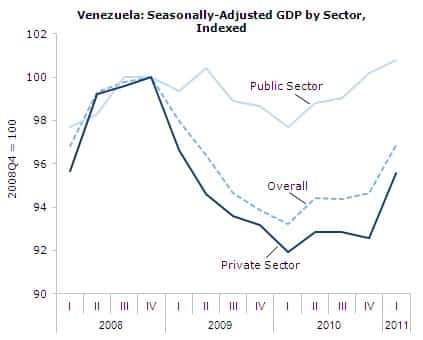 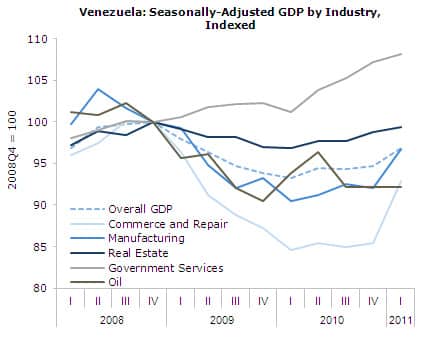 Among expense types, the most dramatic growth was seen in imports, which count against GDP growth, and exports.  Imports and exports rose by annualized rates of 24 and 16 percent, respectively.  Imports have been very volatile during the recession, having lost nearly half of their pre-recession activity by the fourth quarter of 2009, but they have now recuperated about half of their decline.  Exports fell by about 20 percent during the recession, and have recovered about a third of the way to their 2008 levels.  Again, real GDP does not take price changes into account, so the rise in exports is not related to oil price fluctuations.  The rise in imports, together with the rise in private consumption, points to a consumption-driven recovery.  This interpretation is consistent with the recent industry rise in commerce and repair and in manufacturing.  Private consumption, which accounted for 71 percent of GDP in 2010, tracks very close to overall GDP growth.  It lost about seven percent of its 2008 level during the recession, and has recovered about half of the way back to that peak level.  Gross fixed capital formation continues to falter.  In the second quarter of 2010 it rose dramatically, but it has since fallen almost all the way to its trough during the recession.  Finally, government consumption has followed roughly the same path as general government services, slipping only once during the recession and currently running at seven percent above its 2008 level. 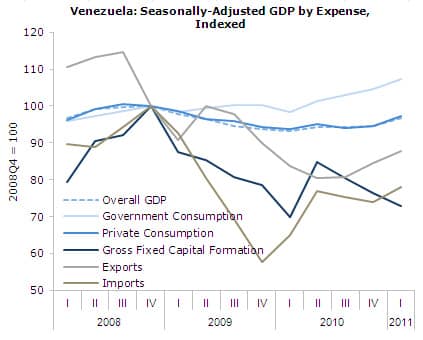 Like all GDP estimates, these are subject to revisions.  The central bank’s latest releases have included several revisions, with the effect that the recession now looks deeper than it did previously, and the recovery steeper.  When the central bank publishes seasonally-adjusted data for more recent quarters, we may see some difference from these estimates. 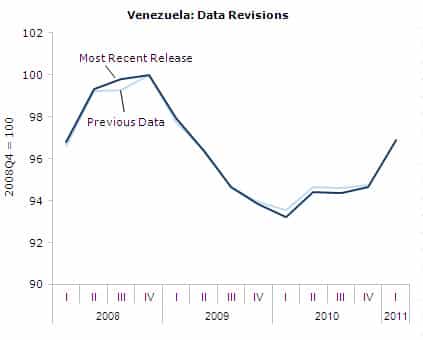 1  The BCV’s seasonally adjusted data (which is currently available here: www.bcv.org.ve/excel/5_2_5.xls?id=109) states that is adjusted using the U.S. Census Bureau’s X-12 Arima module for E-views.  Our adjustments are made directly with the X-12 Arima software, available from the Census Bureau here: www.census.gov/srd/www/x12a/.

Rebecca Ray is a Research Associate at the Center for Economic and Policy Research in Washington, D.C.  This article was first published by CEPR on 6 June 2011 under a Creative Commons license.  En Español.