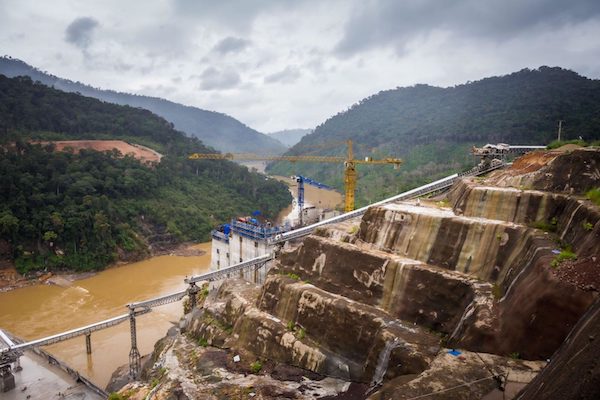 As China prepares to host the Conference of the Parties to the Convention on Biological Diversity (CBD COP15) in October, the world will be watching and considering the impacts of Chinese overseas activities on biodiversity, and on local communities who base their livelihoods around their environment.

While China has made commitments for sensitive territories domestically through its Ecological Conservation Red Line (ECRL) initiative and its commitment to achieve carbon neutrality by 2060, it has not yet implemented these same policies for its international investments along its Belt and Road Initiative (BRI). Following the significant announcement from President Xi Jinping at the recent UN General Assembly that China will no longer finance new coal-fired power projects abroad–increasing support for other developing countries in low-carbon energy instead–it appears that China is turning its attention to improving the sustainability of its international investments.

China has funnelled nearly half a trillion U.S. dollars in overseas development finance to developing countries since 2018–a figure with the potential to make a much-needed dent in the estimated US$3.2 trillion annual infrastructure gap standing in the way of lower- and middle-income countries’ economic development. Given the impressive scale of this increased financing, it is no surprise that interest is growing in ensuring that China’s international economic activity aligns with global climate and development goals.

Until recently, a lack of data had circumscribed scientists, policymakers and other stakeholders from understanding and responding to the environmental and social risks posed by China’s overseas development projects.

New research from the Boston University Global Development Policy Center (GDP Center) sheds light on the level and location of risks in China’s overseas projects and provides recommendations for greening and aligning the BRI with global biodiversity goals.

Notably, Chinese policy banks lend to the same countries as the World Bank, but for very different projects. From 2008 through 2019, most of the money lent to governments by the World Bank went to healthcare, education, water and sanitation, and other governments services. In contrast, about three-quarters of Chinese development finance went to infrastructure and extraction projects, such as roads, pipelines and mining projects. As these sectors can be prone to environmental and social risks, it is crucial for China to give attention to mitigating the risks intrinsic to its portfolio.

Another important source of environmental and social risk is the locations of the projects. Chinese-financed projects are more likely to face these location-based environmental risks than those funded by World Bank loans, especially in the important sectors of extraction and energy. About half of the Chinese-financed projects were located within critical habitats, about one-third were within designated protected areas, and about one-fourth were within Indigenous lands.

However, World Bank projects pose their own risks as well. In particular, World Bank-financed agricultural projects are more likely to overlap with Indigenous territories than Chinese projects in the same sector. Overall, however, the GDP Center’s results point strongly to the need for more environmental due diligence for Chinese-financed overseas projects.

How to green the BRI

Fortunately, policy frameworks for greening the BRI are already underway in China.

Measuring progress on environmentally sustainable investments has been gaining attention in China. Domestically, the Ecological Conservation Red Line (ECRL) process has within one decade succeeded in designating one-fourth of China’s land area for protection, based on years of biodiversity and land use data. Notably, these conservation steps include special provisions for communities’ traditional livelihoods, showing a growing recognition among Chinese leaders of ecological fragility and the communities whose livelihoods depend on them. The ECRL work has made China a global leader in deploying data-driven conservation.

A study produced in 2020 by the China Council for International Cooperation on Environment and Development (CCICED) explored how China could adopt a policy of collaborating with environment ministries in BRI host countries to assist them in establishing their own systems of conservation areas, akin to China’s ECRL system. Offering such assistance to help host countries further develop their own conservation areas is one powerful way of addressing the location-based risks to biodiversity and Indigenous territories.

In September 2021, CCICED released a report, to which I contributed, outlining how environmental governance of China’s overseas activities is implemented and recommendations for greening the BRI. A high-level international advisory body operating with the approval of the Chinese government, CCICED works with international scholars and the Chinese Ministry of Ecology and Environment (MEE) to produce its recommendations.

To green the BRI, it will be essential to incorporate sustainability policies into the practices set out for China’s policy banks and contractors. Other major international development finance institutions (DFIs), particularly those with South–South focuses like the CAF Development Bank of Latin America and the Development Bank of Southern Africa, begin by working “upstream” with borrower countries, long before specific projects are proposed, to build strategies for new sectors like renewable energy, and to develop proposals with high environmental standards. Incorporating this kind of upstream collaboration will be necessary for China to ensure the long-term sustainability of their overseas projects.

This summer, China adopted new inter-ministerial Green Development Guidelines for Overseas Investment and Cooperation, which recommends project sponsors respect host-country environmental regulations or, where those regulations are weaker than China’s, to rely on international standards instead. This is an important step forward, and the first time that guidelines at this high governmental level have included this recommendation. To strengthen this initiative even further, China could also adopt binding requirements for environmental performance of project proposals and mechanisms for monitoring compliance.

To strengthen processes for environmental due diligence, the MEE developed and proposed a “whole process green assessment framework” for BRI projects. The framework broadly consisted of requiring evidence that the sponsors of a new project have enough expertise to carry it out responsibly. It also suggests that an investor examination by financial institutions would be needed to determine project risk level. From that stage, stakeholders would proceed to carry out pre-investment studies, and an environmental policy review that includes third-party evaluation of the mitigation actions necessary for the risks identified in previous steps. Any project implementation contract would formally commit to the mitigation actions found in the discovery period and there should be formal processes for monitoring implementation, in order to ensure performance meets commitments.

With the CBD COP15 around the corner, the scene is set for China to export its green ambitions and know-how along the BRI–a development that would be to the benefit of China, host countries and, indeed, the world.