Brazil’s GDP grew at a 2.5 percent annualized rate in the second quarter, down from 5.4 percent in the first quarter, and somewhat lower than its year-over-year growth of 3.2 percent.  GDP is now 7.8 percent above its pre-recession peak. 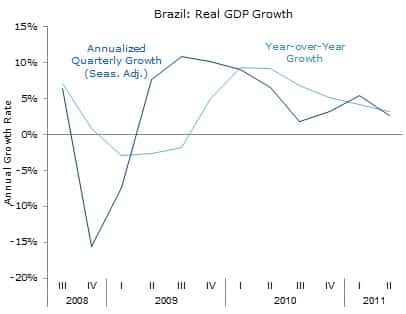 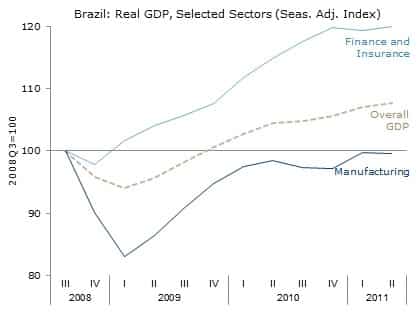 In the first quarter, manufacturing (the worst-performing sector since the recession) began to close the gap with finance and insurance (the best-performing sector since the recession), as manufacturing grew at its fastest rate in a year while finance shrank for the first time since 2008.  In the second quarter, however, the gap widened again.  Finance returned to positive, if modest, growth at an annualized 2.3 percent rate, while manufacturing shrank by 0.8 percent, annualized.  Finance has now risen to 20 percent above its pre-recession peak, growing 4.5 percent since the second quarter of 2010.  Manufacturing, in contrast, is still struggling to reach its 2008 levels.  Since the second quarter of 2010, it has grown 1.2 percent, but since the pre-recession peak its growth has averaged an essentially-flat -0.1 percent per year.

Domestic sources of demand — private consumption, government spending, and gross fixed capital formation — all grew faster than overall GDP in the second quarter.  The only expense category to hurt GDP was the worsening trade balance, discussed in more detail below. 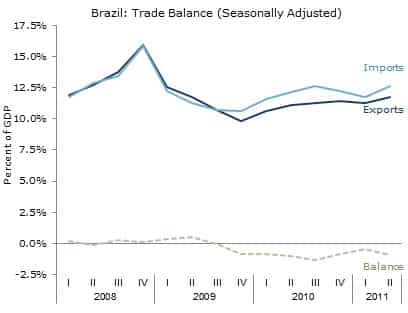 Both exports and imports bounced back after losing ground in the first quarter.  However, imports grew at a much faster pace: 31.4 percent annualized compared to 9.7 percent for imports.  The result is that the trade deficit widened, from 0.4 to 0.9 percent of GDP, after two quarters of improvements.  The previous two quarters’ improvement was largely due to falling imports, so over the past four quarters, imports have grown by only 13.4 percent.  Exports have remained much more stable, growing 6.3 percent over the past four quarters.

On August 31, the central bank lowered the Selic rate from 12.5 to 12 percent, in a move that surprised markets.  The real has fallen against the dollar from 1.59 on August 31 to 1.86 today.  With the global economy slowing, it appears that Brazilian policy makers — who had previously moved to slow the economy after last year’s 7.5 percent growth — may be reversing course.  With IMF projections for economic growth in the U.S., Europe, and elsewhere revised downward in last week’s World Economic Outlook, and a number of warnings of downside risks, moves toward a more expansionary macroeconomic policy would appear prudent.

Rebecca Ray is a Research Associate at the Center for Economic and Policy Research in Washington, D.C.  This article was first published by CEPR on 30 September 2011 under a Creative Commons license.