The Union of Concerned Scientists often complains about Nuclear Regulatory Commission inaction — the agency’s failure to enforce its regulations prohibiting unmonitored and uncontrolled releases of radioactively contaminated water, the agency’s tolerance of four dozen reactors operating in violation of fire protection regulations, and so on.

Today, we commend the NRC in action.

Flood waters in Nebraska have reached the Fort Calhoun nuclear plant.  But whatever threat flooding poses to the plant, that risk is lower today due to actions taken last year by the NRC.  During their routine inspections of weather protection readiness in 2010, the NRC’s inspectors found a commitment in the plant’s design and licensing reports stating that vital safety equipment located in the auxiliary building would be protected against a flood rising to 1014 feet above mean sea level.

The NRC’s inspectors determined that the plant’s design did not fulfill this commitment.  In fact, NRC estimated there was a 100% chance of reactor core damage caused by a flood rising above 1010 feet.  The table at the top of Figure 1 provides the NRC’s assessment of the flooding risk while the table at the bottom provides the results from the risk assessment by Fort Calhoun Station (FCS).  The company contested the NRC’s estimate.  Its calculations showed that the chance of core meltdown was merely 19% for floods above 1010 feet and up to and including 1010.8 feet and only 23.9% for floods above 1010.8 feet to 1014 feet. 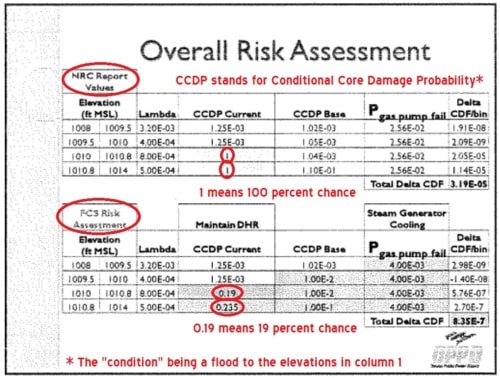 NRC issued a Yellow finding to Fort Calhoun’s owners for the flood protection shortcomings.  NRC uses four colors to characterize severity of violations with yellow being the second-most serious.  As shown in Figure 2, the NRC only issued two Yellow findings and no Red findings (the most serious) in 2010.  So, NRC took the flooding problems it found at Fort Calhoun very seriously and forced its owner to remedy the shortcomings. 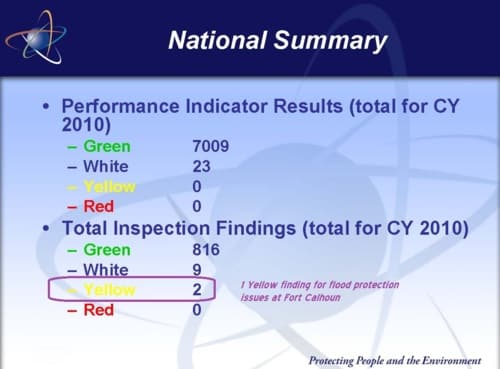 UCS cannot say that these NRC actions already prevented an accident at Fort Calhoun or that they will prevent one should the flood waters continue to rise.  However, the NRC did its job last year.  The NRC’s inspectors found that Fort Calhoun was supposed to be protected against floods rising to 1014 feet, but was not.  The NRC’s risk analysts determined that this deficiency was not academic — floods above 1010 feet had a 100 percent chance of core meltdown.  And the NRC’s managers used the agency’s enforcement process to compel the plant’s owner to remedy the shortcomings rather than merely debate their risk.

Kudos to the NRC for taking pro-active steps last year to make Fort Calhoun better protected against this year’s flood.

“Plant workers briefly switched to diesel backup generators to keep nuclear fuel at the site cool because water had gotten too close to electrical transformers, Jeff Hanson, a spokesman for the utility, said Monday.  The plant was again drawing power from the electrical grid, he said” (“NRC Chairman to Visit Nebraska Nuclear Plant Surrounded by Water,” CNN, 27 June 2011).

David Lochbaum is Director of the Nuclear Safety Project at the Union of Concerned Scientists.  Lochbaum’s article above was first published in the UCS’s All Thing Nuclear blog on 22 June 2011; it is reproduced here for non-profit educational purposes.  See, also, Dave Lochbaum, “Nuclear ‘Station Blackout'” (17 March 2011); Dave Lochbaum, “The Lessons of Fukushima” (29 March 2011); Dave Lochbaum, “Written Testimony before the Energy and Environment and Investigations and Oversight Subcommittees of the U.S. House of Representatives Committee on Science, Space, and Technology” (13 May 2011).