The combination of an earthquake followed by a tsunami in Japan initiated a sequence of events that ultimately led to damage to the reactor cores at Fukushima Dai-Ichi Units 1, 2, and 3 caused by inadequate cooling.

Can’t happen here?  Perhaps not by the same method, but definitely with the same consequences.

The earthquake caused the normal supply of electrical power — that from the electrical grid — for the Fukushima nuclear plant to be lost.  Per design, the emergency diesel generators at the site automatically started and provided power to essential emergency equipment.

Then the tsunami arrived and disabled the emergency diesel generators.  This left the plant without alternating current (ac) electrical power.  This condition with no ac electrical power is called a station blackout (SBO).

Per design, batteries provided direct current (dc) electrical power for a bare-bones minimal subset of emergency equipment.  The dc power enabled a steam-driven turbine connected to a pump of the reactor-core isolation cooling (RCIC) system to supply cooling water for the reactor cores.  The steam was being produced by the decay heat from the shut down reactor cores.

In June 1988, the NRC adopted a new safety regulation (10 CFR 50.63, “Loss of all alternating current power”) that required the owners of US reactors to take steps to assure their facilities could safely withstand an SBO event lasting 4 or 8 hours, depending on site-specific parameters.

Long after the plant owners implemented all the modifications to their reactors and revisions to operating procedures required to comply with the SBO regulation, the NRC evaluated the effectiveness of the new requirements and published the results in a report called NUREG-1776.  Table B-2 of this NRC report summarizes results for each reactor operating in the US (see below for help in reading these tables).

Eleven reactors have batteries designed to supply dc power for up to 8 hours should an SBO occur.  The Fukushima reactors were also equipped with 8-hour battery capacities; they were insufficient to meet the challenge.  Ninety-three US reactors are designed with batteries lasting half that long.

What are the odds of a SBO leading to disaster at a US reactor?

For example, the NRC’s report shows that the risk of an SBO at the Brunswick nuclear plant in North Carolina leading to reactor core damage is nearly twice the risk from all other causes combined.  Brunswick’s batteries are sized to last only 4 hours — half the capacity of the batteries that failed to preserve safety at Fukushima.

And, as Figure 1 below shows, Brunswick is not so unusual.  This plot shows that, for many US reactors, SBO accounts for a large fraction of risk that events would lead to core damage. 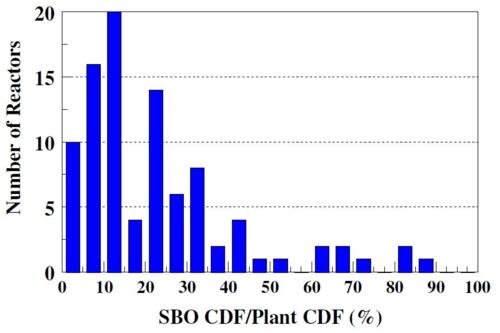 Rather than stand behind the empty reassurance that our reactors are not susceptible to SBO caused by an earthquake/tsunami one-two punch, the US government should review the SBO risk from two perspectives:

1) How to increase the reliability of the electrical grid being restored and emergency diesel generators being repaired so as to improve the odds of exiting a SBO condition before the batteries are depleted.

2) How to lessen the chances of a reactor meltdown should the batteries be depleted before ac electrical power is restored.

For those interested in the details of the NUREG-1766 tables, here is a brief description of the entries and terminology in the table:

SBO CDF: Risk of reactor core damage per year from only a station blackout event.

Percent SBO CDF of Plant CDF: The percentage of overall risk of reactor core damage from a station blackout event.

Modification Summary: Physical changes made to the plant for compliance with the SBO rule

PRA Loop Initiating Event Frequency: Chances per year that the ac power from the electrical grid will be lost.

Number of LOOP Events since Commercial Operation: Actual number of times that ac power from the electrical grid has been lost due to plant problems, due to weather problems, and due to grid problems.

LOOP Event Recovery Times > 240 Minutes: The time, in minutes, when the electrical grid has been lost for longer than 4 hours.