The disaster at the Fukushima Dai-Ichi nuclear plant in Japan prompted some people to contend that since U.S. reactors have Severe Accident Management Guidelines (SAMGs) they are less susceptible to disaster.

A recent NRC audit of SAMGs at the nation’s nuclear power plants, however, suggests otherwise.  One of the lessons from the 1979 Three Mile Island accident was that U.S. nuclear plants needed better emergency procedures for and training of control room operators.  Two sets of procedures were developed.

The first set was the Emergency Procedure Guidelines (EPGs), which were introduced in June 1980 to help the operators respond to emergencies at the plants.  These emergencies included transients (e.g., unplanned reactor shutdowns) and accidents (e.g., pipe breaks that drained cooling water from the reactor vessel).  The NRC licenses control room operators, and to obtain a license, operator candidates must demonstrate proficiency on the EPGs both on written exams and in control room simulator exercises.

The second set was the SAMGs.  They were first introduced in June 1996 to back up the EPGs for severe or unusual events — those involving multiple failures of safety equipment or unanticipated accident sequences.  For example, the EPGs lay out various means of supplying water to the reactor vessel to cool the nuclear core.  If none of those options are available, the SAMGs take over to provide options like flooding the containment structure around the reactor vessel with water to a level above the top of the core.

Unlike for the EPGs, candidates for NRC operator licenses need not demonstrate any knowledge whatsoever of the SAMGs and their application.

The nuclear industry developed the SAMGs, but they are voluntary.  So the NRC can monitor them but cannot force the industry to take them seriously.

The NRC recently audited SAMGs at all U.S. nuclear plants, checking how prepared the plants were to use these guidelines in case of serious accidents.  The results were not reassuring.

The NRC audit report is available in the agency’s online electronic library under the Accession No. ML11154A117.

The NRC’s inspectors answered 11 questions about the plants they audited.  For example, one of the questions was: “Did personnel receive periodic training on the SAMGs and how they related to their assigned duties?”  The questions were structured such that “Yes” answers were good and “No” answers were not. 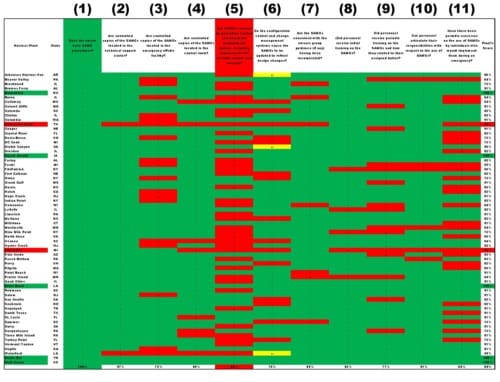 Every plant had copies of the SAMGs (question 1).  But they were not always where they would be needed.  For example, SAMGs were not available in the technical support centers, emergency operations facilities, and control rooms at the Comanche Peak (TX) and Waterford (LA) nuclear plants (questions 2, 3, and 4).  These are the three primary locations where responses to accidents would be managed, yet copies of the SAMGs are not even available.

At more than half of the nation’s nuclear plants, administrative rules do not require periodic review and updating of the SAMGs.  At a quarter of the plants, the administrative rules do not ensure SAMGs are revised to reflect modifications to the plant.  Consequently, personnel may be coping with a serious accident with outdated and obsolete SAMGs (questions 5 and 6).

At nearly a quarter of the plants, personnel do not receive periodic training on the SAMGs.  And at nearly 10 percent of the plants personnel could not explain to the NRC’s inspectors what they would be expected to do by the SAMGs (questions 9 and 10).

Training exercises have not been conducted at 40% of the plants for workers expected to use the SAMGs (question 11).  This means that many workers will read and try to follow the SAMGs for the first time during an accident — a little late in the game for them to sort out any confusing parts.

On the down side, two U.S. plants — Comanche Peak (TX) and Palisades (MI) — had negative answers to seven of the eleven questions.  It’s not likely that these plants are really ready to cope with a Fukushima-like challenge.  Perhaps they would get by with luck, but not using their SAMGs, assuming they could find them.

Overall, 20% of the answers were negative across the nation’s fleet of reactors.  Eighty percent is hardly a reassuring score on this test.  If the SAMGs are truly to serve as a safety net backing up emergency procedures, all of the boxes in the figure should be green.

There’s little excuse for the nuclear industry recognizing the need for SAMGs and then taking such a cavalier approach to their development and use.

David Lochbaum is Director of the Nuclear Safety Project at the Union of Concerned Scientists.  Lochbaum’s article above was first published in the UCS’s All Thing Nuclear blog on 27 June 2011; it is reproduced here for non-profit educational purposes.  See, also, Dave Lochbaum, “Nuclear ‘Station Blackout'” (17 March 2011); Dave Lochbaum, “The Lessons of Fukushima” (29 March 2011); Dave Lochbaum, “Written Testimony before the Energy and Environment and Investigations and Oversight Subcommittees of the U.S. House of Representatives Committee on Science, Space, and Technology” (13 May 2011).