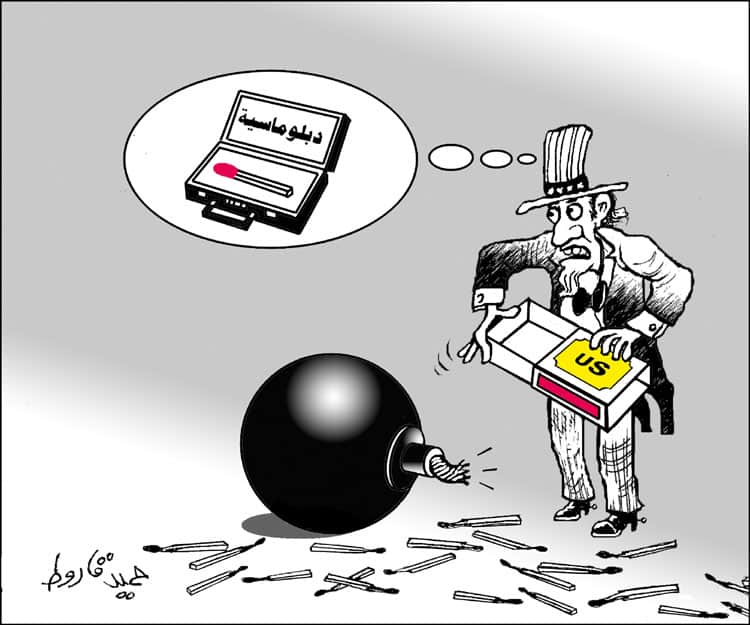 Hamid Karout is a Syrian cartoonist.  This cartoon was first published in Tishreen on 14 July 2011; it is reproduced here for non-profit educational purposes.  Cf. “‘The OIC has a strong desire to build national dialogue between governments and the opposition forces.  This happened in Syria and the example should be followed by other countries and there should be a compromise of political powers in my opinion,’ OIC chief Ekmeleddin Ihsanoğlu said at an OIC conference at Istanbul’s Sabancı University on Tuesday” (“OIC Supports National Dialogue in Arab Spring,” Hürriyet Daily News, 12 July 2011); Bassem Mroue, “Arab League Tells US to Stop Interfering in Syria” (Associated Press, 13 July 2011); Bill Varner, “U.S., Europeans Blocked Anew at UN over Syrian Nuclear Plant” (Bloomberg News, 13 July 2011); “The State Department’s activist approach highlighted divisions within the administration over the proper U.S. response to the crackdown.  Some policy advisers, including senior members of Clinton’s staff, have cautioned against firm statements committing the United States to a policy of seeking Assad’s removal.  There is no support internationally for a Libya-style military intervention in Syria, these advisers observe, and also little evidence that the country’s loosely organized opposition is prepared to take control of the country, raising the risk of prolonged turmoil or even civil war.  But . . . a growing faction within the administration began to urge a more assertive posture.  These include Ford, the veteran diplomat and newly appointed ambassador to Damascus, as well as Clinton herself. . .” (Joby Warrick and Mary Beth Sheridan, “Impromptu Words, Actions Drive U.S. Stance on Syria,” Washington Post, 16 July 2011); “The footage from Sahat Al-Umawiyyin in Damascus now is clear: this is one massive show of support for the regime. . . .  I must say that the opposition meeting in Istanbul may have helped the regime: not only because it was dominated by the Ikhwan (who funded it, my sources say) — I heard one speaker there speak about Jihad and he did not mean struggle against Israel” (As’ad AbuKhalil, “Pro-Bashshar Rally,” Angry Arab News Service, 17 July 2011).