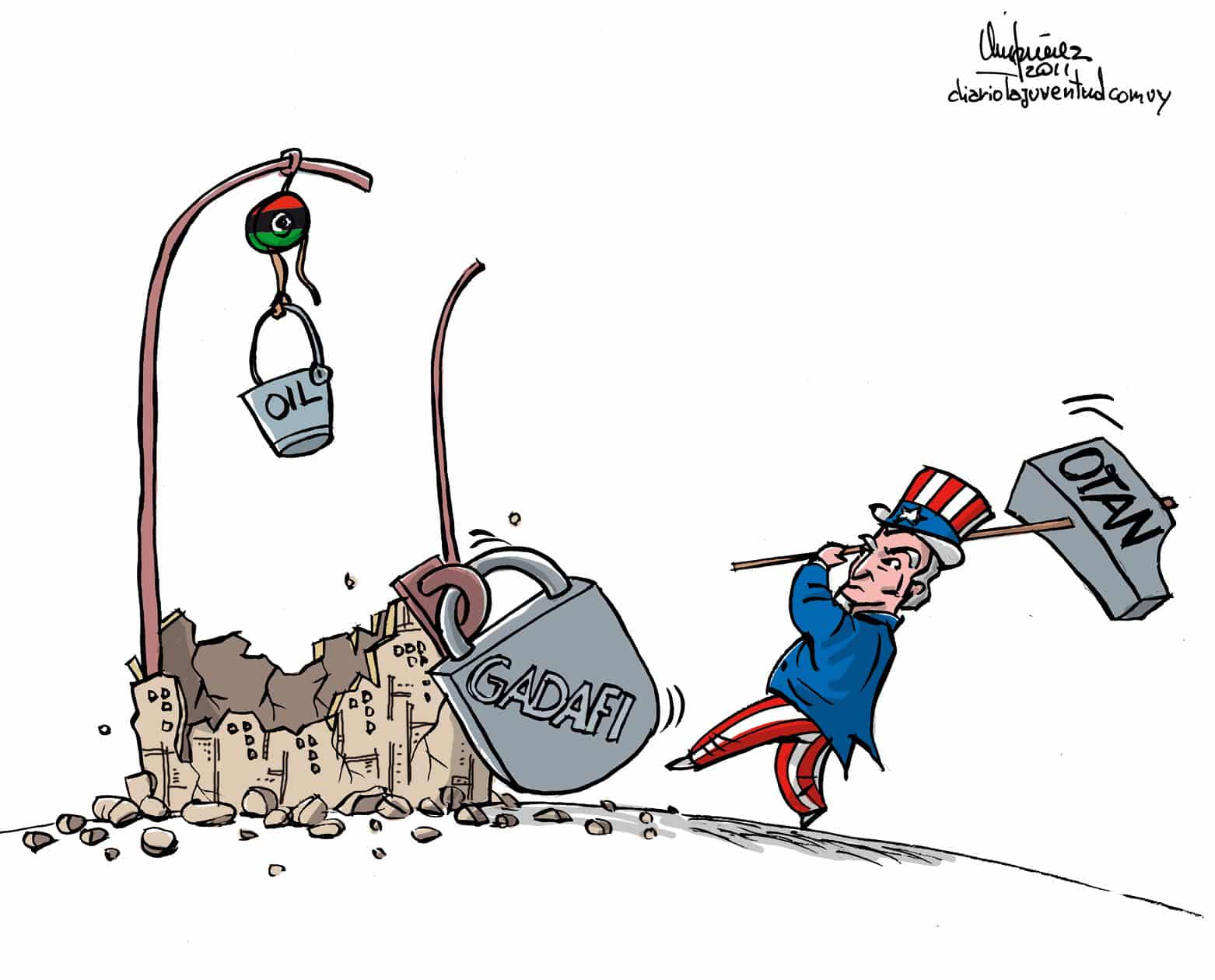 With the hammer of NATO against the Gaddafi forces,
Uncle Sam seeks to unlock Libya for the TNC(s). . . .

Gervasio Umpiérrez is a cartoonist based in Montevideo, Uruguay.  This cartoon was published on his blog on 23 August 2011; it is reproduced here for non-profit educational purposes.  Cf. “Libya’s economic freedom score is 38.6, making its economy the 173rd freest in the 2011 Index.  Its score has decreased by 1.6 points, reflecting declines in three of the 10 economic freedoms.  Libya is ranked last in the Middle East/North Africa region, and its overall score is well below the world and regional averages. . . .  The overall freedom to start, operate, and close a business is significantly restricted. . . .  Foreign investment does not receive national treatment, and new investment is screened by the government.  At least 35 percent of a non-Libyan business must be controlled by Libyan individuals or companies. . . .  Repatriation and most capital transactions, including transactions involving capital, credit operations, and direct investment, are subject to controls, including approval requirements.  Foreigners may not own land in most cases. . . .  [P]rivate banking institutions are unable to compete with state-subsidized companies.  The banking sector is still dominated by four banks that are fully or majority-owned by the Central Bank of Libya.  These four banks account for more than 90 percent of assets. . . .  The Libyan government eliminated all private property rights and most private businesses in 1978.  The renting of property was declared illegal, and ownership of property was limited to a single dwelling per family, with all other properties being redistributed. . . .  There is little land ownership, and the government has the power to renationalize any property that has been privatized.  Foreign companies are especially vulnerable, and the government has a history of expropriation” (“Libya,” 2011 Index of Economic Freedom, Heritage Foundation, 2011); “Colonel Qaddafi proved to be a problematic partner for the international oil companies, frequently raising fees and taxes and making other demands.  A new government with close ties to NATO may be an easier partner for Western nations to deal with.  Some experts say that given a free hand, oil companies could find considerably more oil in Libya than they were able to locate under the restrictions placed by the Qaddafi government” (Clifford Krauss and Elisabetta Povoledo, “The Scramble for Access to Libya’s Oil Wealth Begins,” New York Times, 22 August 2011).