The Labor Department reported that there was no growth in jobs in August, while it revised down its job growth numbers for the prior two months by 58,000.  Job growth over the last three months has now averaged 35,000, well below the 90,000 needed to keep pace with the growth of the labor force.  The Verizon strike reduced the number of jobs reported in August by 45,000.  Adjusting for this factor, job growth would have averaged 50,000 over the last three months.

The household measure showed that the unemployment rate remained unchanged at 9.1 percent; although, the employment-to-population ratio (EPOP) did edge up from its recession low to 58.2 percent.  The number of people involuntarily working part-time jumped up by 430,000, to 8.8 million.

The weak job growth picture on the establishment side is across the board with no sector showing robust growth in August.  Still, there were some one-time factors that likely exaggerated the weakness for the month.  Manufacturing, which reportedly lost 3,000 jobs in August, had shown a gain of 36,000 jobs in July.  This was driven by the fact that the auto industry no longer had large-scale shutdowns for retooling in July.  Autos and fabricated metals added 16,500 jobs in July; they lost 8,200 in August.  There is a similar story in retail, where earlier-than-usual back-to-school sales led to 26,400 new jobs in July.  There was a 7,800 drop in jobs in the sector in August.

The three-cent decline in wages reported in August also was an anomaly.  The average hourly wage rose by 11 cents in July.  The big factor in this rise and reversal was a reported jump of 0.9 percent in the wage in the retail sector in July, which was almost completely reversed in August.  Over the last three months, wages have been rising at a 2.2 percent annual rate, up slightly from the 1.9 percent rate over the last year.

However, even correcting for these peculiarities, there can be little doubt that the picture in the August data is bleak.  Health care, which added 29,700 in August, is the only sector adding jobs at a respectable pace.  Restaurants added 9,300 jobs last month and an average of just 2,300 jobs over the last four months.  The temp sector added 4,700 jobs in August.  Temp employment is still 7,500 below the March level.  And average weekly hours edged down by 0.1 percent.  The government sector lost 17,000 jobs in August, bringing its average rate of job loss to 37,700 over the last three months.

One item worth noting is the continuing decline in the unemployment rate for workers in the construction and manufacturing industries.  The former is down to 13.5 percent from 17.0 percent a year ago, and the latter is now 8.9 percent, slightly below the overall unemployment rate.  This trend undermines the argument that any substantial portion of the rise in unemployment is structural.  Together these sectors increase overall unemployment by less than 0.2 percentage points. 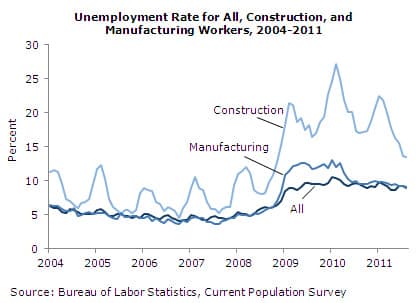 Adjusting for the Verizon strike and seasonal peculiarities, this report shows an economy that is growing, but at a very slow pace.  It is not even creating sufficient jobs to keep pace with the growth of the labor force.  It is difficult to see how this will change absent a boost from the government.

Dean Baker is co-director of the Center for Economic and Policy Research in Washington, D.C.  He is the author of several books, including False Profits: Recovering from the Bubble Economy.  This article was first published by CEPR on 2 September 2011 under a Creative Commons license.