The Case-Shiller 20-City index rose 0.9 percent in July after rising by 1.1 percent in June.  It has now increased at a 13.1 percent annual rate over the last three months; although it is still down by 4.1 percent over the last year.  Eighteen of the 20 cities had prices increases, with only Phoenix and Las Vegas showing modest price declines (0.1 percent and 0.2 percent, respectively).

The relatively strong price growth in the July report may seem out of line with other data, most notably the new homes report released by the Commerce department yesterday, which showed sharp declines in both the median and average sales price for new homes.  It is important to recognize that the Case-Shiller data is, to some extent, a lagging measure of conditions in the housing market, showing an average of prices for sales closed in the three months ending in July.  Allowing for 6-8 weeks between contract and closing, this means that the July Case-Shiller index is reflecting contracts signed in March, April and May.

By contrast, the report on new home sales was showing data on homes contracted in August.  The monthly new homes data is erratic, so a single month’s data must always be viewed with caution, but it does give a much more up-to-date view of the housing market.

As noted last month, this seems to reflect a bounceback from sharp price declines associated with the ending of the first-time buyers tax credit.  In Minneapolis, prices of homes in the bottom third of the market rose by 3.4 percent in July and have risen at a 51.8 percent annual rate over the last three months; however they are still down by 26.4 percent from their year-ago level.  Chicago has a similar story with prices in the bottom tier rising by 1.7 percent in June and at a 39.9 percent rate over the last three months, but still down 22.5 percent over the last year.

This pattern in these Midwest cities is likely capturing the impact of the first-time buyers credit in much of the country, since the $8,000 credit had much more impact in these cities with relatively low-priced housing than in the more expensive coastal markets.

Washington, D.C., also had a large increase in house prices with a jump of 2.4 percent in July, bringing the annual rate of increase over the last three months to 22.8 percent.  This was also driven by the bottom tier of the market, which rose 5.3 percent in July and has risen at a 39 percent annual rate over the last quarter.  However, prices in the bottom tier are still down by 4.1 percent from their year-ago level.

It is unlikely that the momentum in the market in recent months will be maintained.  The strongest factor pushing up prices is the reversal of the sharp price declines in bottom-tier home prices in the period immediately following the end of the first-time buyers tax credit.  This upward bounce is surely coming to an end, and this is likely reflected in more recent data on the housing market.

The extraordinarily low mortgage interest rates of recent months will provide some boost to the market, though the scaling back of Fannie and Freddie’s higher mortgage limits will be a factor going in the other direction.  However, the main factor weighing on house prices has to be the enormous amount of excess supply in most parts of the country.  The inventories of new and existing homes for sale remain above normal levels.  In addition, there is a large amount of inventory not showing up on the market, which is best demonstrated by the near-record vacancy rate nationwide. 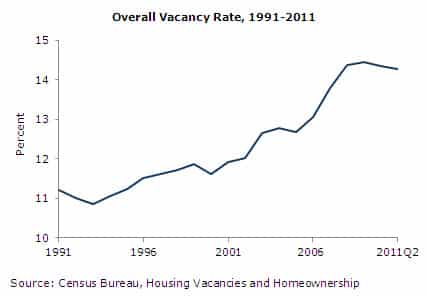 Dean Baker is co-director of the Center for Economic and Policy Research in Washington, D.C.  He is the author of several books, including False Profits: Recovering from the Bubble Economy.  This article was first published by CEPR on 27 September 2011 under a Creative Commons license.