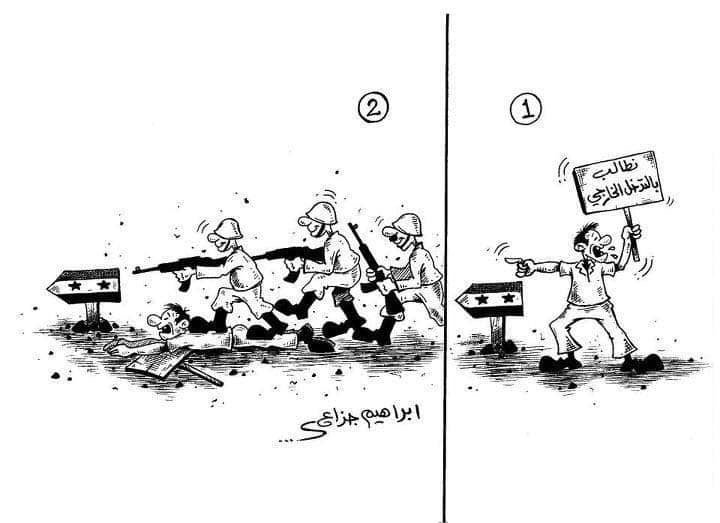 Ibrahim Jaza is a Syrian cartoonist.  Cf. “US State Department tool Radwan Ziadeh today called for a war on Syria.  Speaking on Aljazeera’s prime-time, evening newscast ‘daily harvest’, Washington’s favorite Syrian ‘human rights activist’ did not actually utter the word ‘war’, but that word is rarely used even by the powers that wage the war.  Instead he opted for the agreed upon euphemism of ‘international protection.’  He went on to explain ‘international protection’ would be justified under Chapter 7 of the UN Charter.  Like the minute fraction of Arabs (they are always a minute fraction) that previously supported Western wars on Iraq and Libya, Ziadeh and a handful of like-minded friends are quick to cite Chapter 7 as a ‘legal basis’ for their self-serving collaboration and a fig leaf for their treason.  This is not the first time Ziadeh has expressed his support for a potential war on Syria, but he’s never been as clear as he was today” (“Radwan Ziadeh Calls for War on Syria,” Ikhras, 7 October 2011).