Whatever electoral calculations drove Mitt Romney to choose Paul Ryan as his vice-presidential running mate, the choice also has a deeper meaning.  Ryan’s arrival at the top of the Republican Party represents the rise of the most vocal and visible proponent of austerity in US politics today.  Ryan represents the US parallel to the regimes now controlling, for example, Greece, Spain, and the United Kingdom.  Their shared strategy is simple.  First, deliver austerity policies to the biggest corporations and the richest 5 percent of the citizens.  Second, in return, those two groups’ money will reduce political opposition to the austerity pushers and win them re-election with overwhelming legal and illegal funding.

The Ryan budget proposed earlier this year was his ticket to the publicity that got him the VP nomination.  See who bears the brunt of the $5.3 trillion in Ryan’s proposed non-defense budget cuts over 10 years (these are the cuts his plan proposes versus the spending that would result from maintaining current policies, according to the straightforward calculations of Washington’s Center on Budget and Policy Priorities). 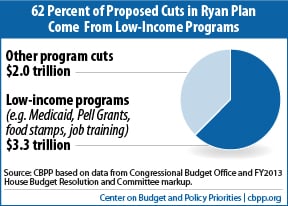 Just like Europe’s austerity regimes, the goal of Ryan and the Republicans is to protect corporations and the rich from bearing the costs of the economic crisis and of the massive government bailouts that benefited primarily them.  Ryan and the Republicans seek to make sure that government debts are not paid for by raising taxes on corporations and the rich.

Let’s remember why government debt soared since 2007.  It was in part because governments BORROWED the money to then bail out the largest banks, bankrupt major corporations (such as General Motors, AIG Insurance, etc.), and the credit and stock markets.  Rather than tax the banks and corporations and stock-market rich to pay for those bailouts, governments borrowed from them instead.

Now, those banks, corporations, and richest 5 percent want to make sure that (1) governments DO pay the costs of their massive national debts, and (2) governments DO NOT tax them to do so.  They fear now that growing national debts will eventually cost them.  To prevent that is why they want austerity politics.

The austerity plan of the world’s Ryans is simple.  Cut government spending on social programs that help millions and use the money saved to instead guarantee government repayment of debt and to slow the growth of that debt.

If that means adding public employee layoffs to already high unemployment, so be it.  If that means a long-term decline in the standards of living (stagnant real wages plus declining public services from government), so be it.  If it polarizes society into extreme inequalities, OK.  All of that reality is hidden under avalanches of ideological ranting (borrowing from deep thinkers like Ayn Rand) about individual freedom from government intrusion.  Republicans want to substitute that as “the key political issue” and to position themselves as champions of such freedom.  Hence the repeated efforts at mass distraction: keeping government away from establishing gun control, legalizing gay marriage, mandating health insurance, etc.

Ryan’s nomination is another milestone in dissolving what remains of the “American Dream”: that notion of the US as a place where workers earn rising real wages for their rising productivity and evermore exhausting working conditions.  It raises the real political issues starkly.  Will Ryan’s ascendancy frighten Obama and the Democrats?  Will fear that they might lose the financial supports of the biggest corporations and the top 5 percent motivate them to move further to the right, to more accommodation and compromise with the austerity pushers?  Will Democrats keep positioning themselves as Republicans Lite, as the lesser evil for the mass of American working people compared to Republicans?

Or will that mass of working people here — like their counterparts, for example, in Greece, Spain, and the UK — start abandoning the political parties and leaderships of the past?  Will the latter’s eager embrace of or sleazy slide into austerity politics finally show that mass the need for new, independent political instruments — electoral and otherwise?  Will we build now on the breakthroughs achieved by the Occupy movements to construct organizations that serve the interests of people who refuse the austerity that is destroying their present and their children’s future?

Richard D. Wolff is Professor Emeritus at the University of Massachusetts in Amherst and also a Visiting Professor at the Graduate Program in International Affairs of the New School University in New York.   He is the author of New Departures in Marxian Theory (Routledge, 2006) among many other publications.  Check out Richard D. Wolff’s documentary film on the current economic crisis, Capitalism Hits the Fan, at www.capitalismhitsthefan.com.  Visit Wolff’s Web site at www.rdwolff.com, and order a copy of his new book Capitalism Hits the Fan: The Global Economic Meltdown and What to Do about It.  His weekly radio program, “Economic Update,” broadcasts on WBAI, 99.5 FM in New York City every Saturday at noon for an hour; it can also be heard live and in podcast archive on wbai.org.