The truth about profits in the US is simple.  Ed Dolan’s recent piece in Seeking Alpha contains a graph that makes it all too clear. 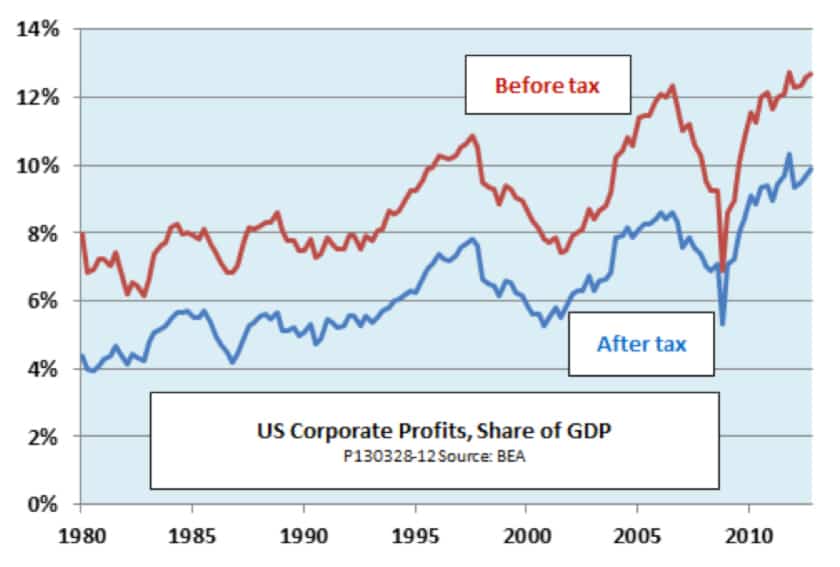 First, it’s clear that profits as a percentage of total US GDP have recovered from the crash of 2008.  Unemployment may still be over 50% higher than it was in 2007, and real wages may be below what they were then, and the benefits and security of jobs may have fallen, but profits have come back.  And with them the stock markets.  Hence also the upbeat talk about “recovery” yet again.

Second, it’s clear that profits have risen dramatically over the last thirty years.  Before-tax profits rose from under 8 to well over 12% of GDP: a better than 50% real increase.  After-tax profits did better still, rising from over 4 to 10%: more than doubling in real terms.  Businesses made more profits while taxes took less of them.  How nice for capitalists.

How nice too that both parties agree that those profits should not be tapped now for any revenues needed to offset the crisis since 2007.  Both parties collaborate to impose an austerity that does not touch profits — an austerity that is “neutral” toward them as it offsets any closing of business tax loopholes by cutting the profit tax rate.  Neutralism toward profits rising for 30 years is thus coupled with raising payroll taxes (as of January 1) and sequestering government social spending (as of March 1).

This is not government policy to solve economic problems.  It is policy to save the minority of long privileged economic players no matter what the economic and social costs.

Richard D. Wolff is Professor Emeritus at the University of Massachusetts in Amherst and also a Visiting Professor at the Graduate Program in International Affairs of the New School University in New York.  He is the author of New Departures in Marxian Theory (Routledge, 2006) among many other publications.  Visit Wolff’s Web site at www.rdwolff.com, and order a copy of his new book Democracy at Work: A Cure for Capitalism.  His work is also featured on the new website: www.democracyatwork.info.  His weekly radio program, “Economic Update,” broadcasts on several Pacifica Network stations including WBAI in New York City and KPFA in San Francisco.  It is archived on rdwolff.com.