A few evenings ago, as the sky began to darken here in Kabul, Afghanistan, a small group of the Afghan Peace Volunteers (APVs) gathered for an informal presentation about WikiLeaks, its chief editor Julian Assange, and its most prominent contributor Bradley Manning.  Basir Bita, a regular visitor to the APV household, began the evening’s discussion noting that June 1st will mark the beginning of Bradley Manning’s fourth year in prison.  Two days later his trial will begin, a trial which could sadly result in his imprisonment for a life sentence.  June 1st also begins an international week of support and solidarity, aimed at thanking Bradley Manning.  #ThankManning!

Basir believes that the vast majority of Afghans are among myriads worldwide who have Manning to thank for information they will need in struggles for freedom, security, and peace.  He wishes that more people would find the courage to stand up to military and government forces, especially their own, and act as “whistle-blowers.”

I often hear Afghan individuals and groups express longing for a far more democratic process than is allowed them in a country dominated by warlords, the U.S./NATO militaries, and their commanders.  In the U.S., a lack of crucial information increasingly threatens democratic processes.  How can people make informed choices if their leaders deliberately withhold crucial information from them?  Manning’s disclosures have brought desperately needed light to the U.S. and to countries around the world, including struggling countries like Afghanistan.

Hakim, who mentors the Afghan Peace Volunteers, recalled that Bradley Manning passed on documents that record 91,730 “Significant Actions,” or “SIGACTS,” undertaken here by the U.S./ISAF forces, of which 75,000 were released by WikiLeaks.  These SIGACTS include attacks by drones, sometimes invisible drones, and night raids.

Our group turned to discussing the history of WikiLeaks, how it formed and how it now functions.  Those most familiar with computers and the internet explained the process of disclosing information by anonymously following a computerized route to a “dropbox.”

In fact, the Afghan Peace Volunteers themselves have been communicating with Julian Assange.

Last winter, Nobel peace laureate Mairead Maguire had stayed with them shortly before she traveled to London for a visit to Julian Assange.  Through Mairead, they had sent Assange a letter of solidarity.

The APVs heard that Manning has been more isolated than Assange; they all shook their heads when Basir reminded them that Bradley Manning was initially in solitary confinement for eleven months.

Ghulamai thought through the ironic process of how governments designate some documents ‘secret’ and how he would presume that the person who shares those secrets was a ‘criminal.’  But Ali said that governments chiefly hide ‘secrets’ from the public to maintain power.  Hakim asked Abdulhai to imagine himself as the head of a government or of a large family.  “If you are working for the good of the family or the state, would you need to do things secretly?” he asked.  “No,” Abdulhai replied.  “If I have power, and I am truly working for the best interests of my people, I will not need to do things in secret.”

There was a keen conversation about who Bradley Manning was and what he did.  Bradley Manning’s own words, which journalists had to actually smuggle out of his pre-trial hearing, described how Bradley’s mind had largely been made up by watching the secret video that he would come to release under the title “Collateral Murder”:

They dehumanized the individuals they were engaging and seemed to not value human life by referring to them as quote “dead bastards” unquote and congratulating each other on the ability to kill in large numbers.  At one point in the video there’s an individual on the ground attempting to crawl to safety.  The individual is seriously wounded.  Instead of calling for medical attention to the location, one of the aerial weapons team crew members verbally asks for the wounded person to pick up a weapon so that he can have a reason to engage.  For me, this seems similar to a child torturing ants with a magnifying glass.

While saddened by the aerial weapons team crew’s lack of concern about human life, I was disturbed by the response of the discovery of injured children at the scene.  In the video, you can see a bongo truck driving up to assist the wounded individual.  In response the aerial weapons team crew assumes the individuals are a threat.  They repeatedly request for authorization to fire on the bongo truck, and once granted, they engage the vehicle at least six times.

Together, the APVs watched the deeply disturbing “Collateral Damage” video itself.  They were avid to learn what they could do to support and thank Bradley Manning.  Yet they’re aware of the risks faced by people who organize public demonstrations in Afghanistan.

It’s far easier to stand up for Bradley where I live, back in the U.S.  I hope many more of us will devote the time and energy we owe this young man for risking everything, as he did, to enlighten us and the world.

The Afghan Peace Volunteers are eager for ways to link with others worldwide to express thanks and concern for a remarkably brave and conscience-driven 25-year-old man whose courage and light is so acutely needed in this darkening time.  I’ve seen the fierce light of these young people and, knowing them, I’m certain that others will be seeing it too in the years ahead.  Are we readying signals with which to answer them, are we preparing ways to show people like them, and like Julian Assange, and like Bradley Manning, that they are not alone? 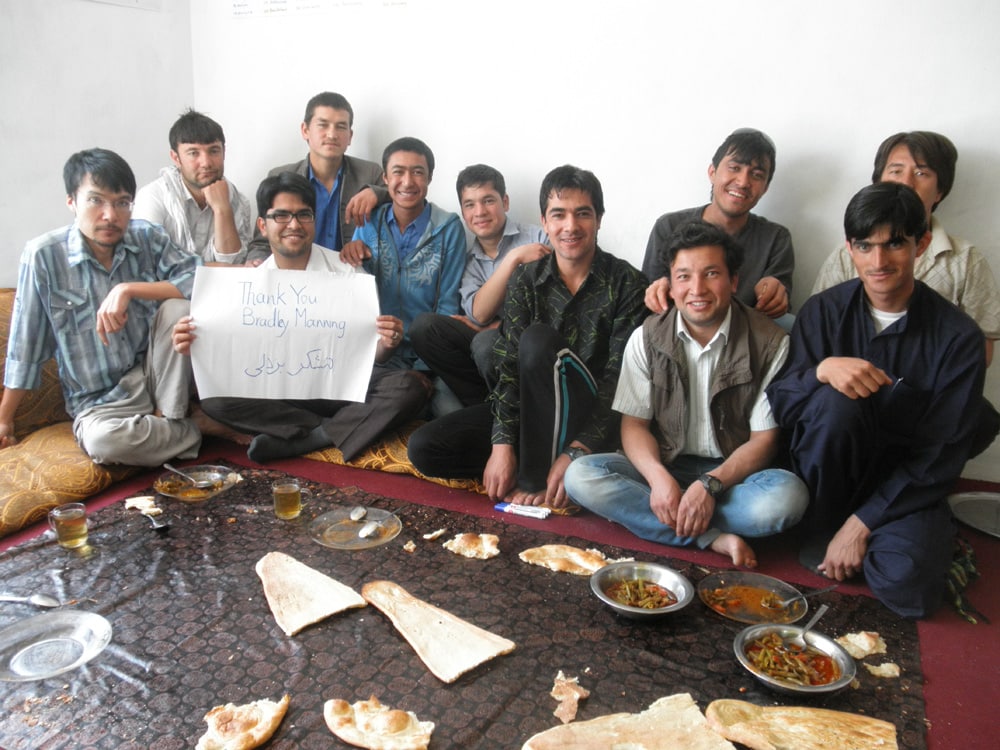 Afghan Peace Volunteers with a sign that thanks Bradley Manning.
Photo by Hakim.

Kathy Kelly, (kathy@vcnv.org), co-coordinates Voices for Creative Nonviolence  (www.vcnv.org).  She is living in Kabul for the month of May as a guest of the Afghan Peace Volunteers (ourjourneytosmile.com/blog/).