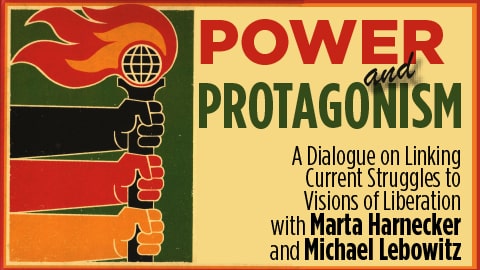 We are honored to bring Marta Harnecker and Michael Lebowitz to the United States for a special series of conversations with movement organizers and activists committed to building more powerful people’s movements and a new type of socialist liberation for the twenty-first century.

Marta Harnecker is the author of over eighty books and monographs in several languages, including A World to Build and Understanding the Venezuelan Revolution.  She has been director of the Memoria Popular Latinoamericana research center in Havana, Cuba and the Centro Internacional Miranda in Caracas, Venezuela.  Harnecker was born in Chile, studied with Louis Althusser in the 1960s, and edited the magazine Chile Hoy (Chile Today) during Salvador Allende’s Popular Unity government.

Michael Lebowitz is professor emeritus of economics at Simon Fraser University in Vancouver, Canada, and the author, among others, of The Socialist Imperative: From Gotha to Now, The Contradictions of “Real Socialism,” The Socialist Alternative, Following Marx, Build It Now, and Beyond Capital.  He was Director, Program in Transformative Practice and Human Development, Centro Internacional Miranda, in Caracas, Venezuela, 2006-11.

Both Harnecker & Lebowitz have rich political histories as movement activists and intellectuals.  In recent years, they have documented and accompanied the rise of many of the radical popular movements in Latin America.  Their experience in that region’s political struggles and experiments, carried out from communities and workplaces to the highest halls of government, has engendered in their work a pronounced emphasis on the concept of protagonism — the participatory and democratic practice that develops new capacities in participants as they struggle to build twenty-first century socialism.

LeftRoots is bringing these two movement intellectuals to the United States to discuss the power and potential of these ideas in the hopes of finding new ways to strengthen our struggles here in the belly of the beast.

Join LeftRoots in reading Marta Harnecker’s Ideas for the Struggle and Michael Lebowitz’ “The State and the Future of Socialism” (from The Socialist Imperative) in preparation for the event.

LeftRoots is a young, national organization seeking to build the individual and collective skills of social movement leftists to formulate, evaluate and carry out strategy to win twenty-first century socialism.  To learn more about LeftRoots, check us out at www.leftroots.net and visit us on Facebook.

Also By Michael A. Lebowitz in Monthly Review Magazine

Books By Michael A. Lebowitz