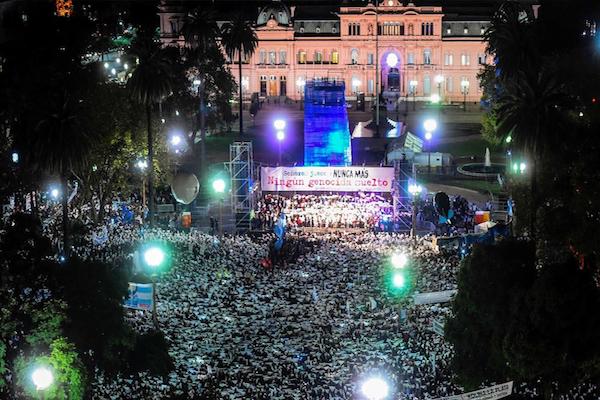 May Square was collapsed by people who went to the streets to show their indignation. Photo: Página 12

With the malignancy of those who are sheltered by many years of impunity, Macri’s government once again tried to leak through the Supreme Court the idea to overthrow one of the biggest achievements obtained by the Argentinian society: the punishment for those who murdered, tortured, disappeared people and exiled thousands of Argentinians.

In this way, Macri was fulfilling a mandate emerged from his own ideology, linked to the military dictatorship in which his family and himself, in his young years, held profitable business in the middle of the massacre. Also linked to the idea of wanting to reduce “manu militari” the quantity of disappeared, when everybody knows that -at least- there were 30.000, and then appealing to the idea of depriving the date of March 24 from its content of popular homage to those that were punished (until death) for wanting a more inclusive and different world.

And, last of all, while counting with the complicity of judges linked to his environment, institutionalizing the 2×1, that it means leaving confessed killers free so that they can keep terrorizing a population that suffers daily other kind of violence linked to state complicity, like hunger, unemployment, lack of a good health system, the downfall of public education, trigger-happy, femicides and other similar scourges.

However, the hateful right that the governing PRO (Macri’s party) and radicals represent once again crashed against the ethical wall that the tenacious and brave militancy of those who defend the human rights represent.

Over half a million men and women of all ages decided to win in the streets what has been snatched in the dark judicial and governmental offices. And they did it with the conviction to stop Macri once again, to expose him as he is.

It is extraordinary to verify the power of mobilization that vanquished again the threat against the future of the population, murderers walking among us, instead of fulfilling the sentences imposed for their crimes. Again, the white scarf of the Mother and GrandMothers became a symbol of struggle and resistance, generating a massive endorsement that forced every major city and small town to turn into a brave flag against the official prepotency. At last, after many years of insisting with unitary formulas, there was only one and giant march, with organized columns but also with decens of thousands auto convoked people. With party’s flags from all the popular and left campus and also with the fresh introduction of improvised signs designed manually by young people who need to express their repudiation against the dictatorship nostalgia that prevails among those who govern since December of 2015. Young people who, by their own means, are screaming that this bourgeois democracy and its institutions do not represent them, and neither do many leaders of obsolete parties that use their credentials to scam the popular will.

May Square was, once again, the containment wall under the umbrella of the human rights organizations, which beyond their lamentable divisions, are the only reference that all great majorities respect. Precisely because when the society was muted by terror, from there emerged the first voices of pain, anger and decision so that impunity would not keep advancing. And these organisms exists because previously thousands of patriots fought in any possible way for a society without exploited people. Now Macrism is trying to vanish -for a second time- the legacy of this militancy that since 1955 and on, struggled against the dictatorships and fought for the Revolution.

On these circumstances, it is important to become aware of the value that struggle and popular mobilization, reaction without speculation before evil and the camouflaged speech that the government tries to carry on, have. It is about responding with our body and ideas, about sending a message to the world, a message that differentiates itself from others that in other latitudes shamefully ignored the ethical principles of human rights defense. With that force, the Senate was forced to absolutely reject the 2×1. With the militant power achieved this May 10, even Mauricio Macri had to unlink himself from the polemic judicial decision.

Once again, the perverse game of “trial and error” was used by Macri’s administration (they have us used to it). But this SHOULD NOT HAPPEN. It is about generating more movement and awareness in the streets and to show that before the atrocities of power, unity is possible. Unity from below. Fighting against the representatives of this capitalism that murdered yesterday, murders today and will keep murdering in the future. If we can not stop it from the root, society shall be in serious and greater problems. The tolerance limit should be our memory, and in order to ensure that it is not crippled by denial formulas extracted from Nazism, the recipe is at view, just as it has been seen this time, where the white scarfs and the warrior legacy of 30.000 people served as unfailing shield.

View the Photo Report at The Dawn