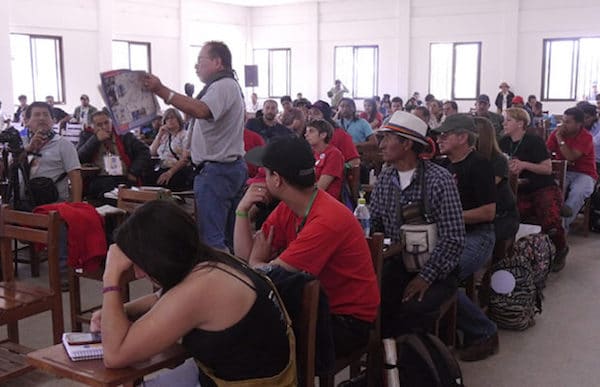 In a context as special as the celebration of the 50th anniversary of the murder of Ernesto Che Guevara, the participants of the Second Latin American Encounter of Anti Imperialist Communicators, gathered in Vallegrande, Bolivia, couldn’t help being touched by the thought and practice of journalist and communicator Guevara. A lot of participants remembered the heroic guerrilla fighter, who besides preoccupying about the logistics of his successive campings, has always procured to carry a mimeograph and paper to write reports directed to the population, where the reasons of the undertaken struggle were explained. The former Bolivian vice minister of communication Amanda Dávila, praised Guevara as a great popular communicator, those that are essential to understand past and future struggles.

Another member of the board highlighted the clarity of the Che while raising the necessity to create a news agency to face the attacks that would come after the triumph of the Cuban revolution to Jorge Ricardo Masetti. So, by the initiative of Guevara and Fidel, the author of “Those who fight and those who mourn”, started the gigantic informative source that was, is and always will be Latin Press (Prensa Latina).

With these incentives and while being surrounded by a geographical environment as particular as Vallegrande, Yuro Valley and La Higuera, two hundred communicators from different parts of the continent, Europe and USA deliberated for three days. The characterization of “anti imperialist” to the meeting that convoked us, helped to reaffirm a path that began the last year in La Paz, and to raise the bet so that from debates, exchanges and testimonial contributions of concrete experiences we can start more ambitious projects linked to our counter informative journalist practice.

Participants shared stories about urgent struggles, such that of the Mapuche fighter. Mewlen Huancho reported on the repressive tactics of Chilean president Bachelet and that there are Mapuche political prisoners who are putting their bodies so that their land demands and their repudiation towards transnational companies are heard. Her voice became a internationalist solidarity act when from her mouth the name Santiago Maldonado came out, a face that was present all along the Encounter with flags of Bolivia, Abya Yala’s Wilphala, Peru, Argentina, the Basque country, Catalonia, Mexico, Mapuche Nation and many others, that embrace the Che and his struggle in the name of humanity.

On his behalf, Peruvian journalists noticed the battles that they are sustaining to defend their community media outlets from the voracity of a pro-US government and warning that despite the ruling neoliberalism, the people is fighting strenuously. A Mexican delegate insisted on the necessity to condemn the pro drug government of Peña Nieto, not only for the impunity in the case of the 43 of Ayotzinapa and for the countless discovered common pits, but because that country has become a cemetery of popular and braves journalists. “The same thing is happening in Honduras”, pointed out a another spokesman. Other denounces appeared like the situation of the political prisoners of Paraguay, or the reiteration of what it is happening  in Argentina under the ruling of Mauricio Macri’s repressive government, being the cases of Maldonado, Milagro Salas, Agustín Santillán and Facundo Jones Huala, the most clear exponents of a policy set that seeks to annihilate protests.

It was really important to hear the colleagues of the Bolivian Native People Radios (RPO), which after the reference of Eduardo Layza gather more than 100 indigenous communitary emitters distributed throughout the territory, “telling the problems with our own voice, without intermediaries nor paternalism”.

It is worthy to highlight the contribution of the Venezuelan comrade Carla Camacho, secretary of the Vice Presidency of Communication, Agitation and Propaganda, who denounced the continuous attacks perpetrated by media terrorism on the Bolivarian Revolution and called to form Informative Brigadiers at a continental level to disseminate “the truth about Venezuela”.

From Europe, the former independent Basque deputee and columnist of the Gara newspaper, Floren Aoiz, stated what the fight and ideas of Guevara meant for the young insurgents of the Euskal Herria of the 60s, besides offering and informative overview on the actual situation of Catalonia and their consequences in other European nation without State, like Euskal Herria itself.

It was stimulating to hear the example of young Colombian communicators of the Patriotic Front Collective, who thrust, among other activities, the football team “Euskadi, the offspring of Bolivar”, in a humble neighborhood of Bogota, or the information on the empire and its media networks, related by Andres Conteris, of Democracy Now, or learning about communication experiences like the Argentinian Cooperative La Colmena, of Rosario and Entre Rios. Or the work of the Web “Pulso de los Pueblos” (The Heartbeat of the Peoples), also from Argentina.

In that spirit of sharing and collaboration among equals, a number of initiatives were discussed: Second Encounter (the Southern Communicational Community, the newspaper Rural Press, the Network Association of Community Radios (RRCB) and the RPO of Bolivia, Resumen Latinoamericano of Argentina, Chaska Station Radio and the Unitary Syndicate of Journalism and Social Communication Workers (SUPTECOS) of Peru, the Vice Presidency of Communications of Venezuela (communicators of 12 countries). It was agreed that these groups must lay the foundation of a wide Network of Anti Imperialist Latin American and Caribbean Communicators (CAL Network). Its purpose is to counter information campaigns that can face the permanent lies of the hegemonic media shall be generated, even without resigning to our own identities.

Other two initiatives, to put in practice are the creation of the “Ernesto Che Guevara” School of anti imperialist formation and communication of Latin America and Caribbe, and the launching of the Agitation, Propaganda and Communication Brigades (APC International) to offer truthful and timely information about Venezuela and other peoples of the world, before the imposed censorship to Venezuela and other nations through a blatant war propaganda.

As a practical conclusion of all that has happened in this Second Meeting, or as a part of a macro workshop of solidarious communication, all the participants generated a conjoint cover of the two central acts in the Che Seminars, where Evo Morales pronounced a combative and shocking speech.

There is no doubt that the challenge to unite is not simple, and in fact it still is one of the great deficits of the Latin American left. In the area of communication and media, there is an urgent need for a strategy to spread understanding of the complex moment the continent is facing. Informing in order to teach with the purpose that the peoples count with the ideological elements that allow them to exercise in good conditions their self defense from an anti imperialist, anti capitalist, anti patriarchal point of view in the name of socialism.