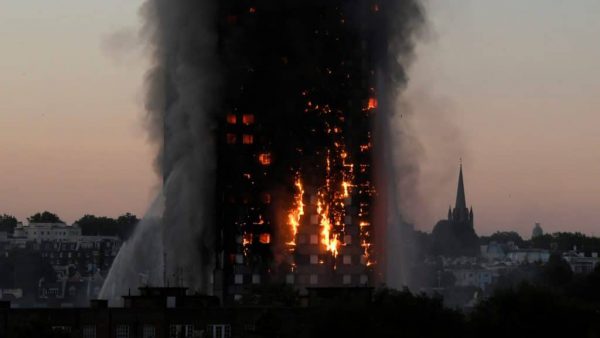 LONDON — They have not yet said it in public, but police and firefighters fear this week’s high-rise fire in West London is the most deadly British disaster in a generation.

The list of missing people stretches to 400. Officials say they believe the number of dead is lower than that because they have many instances of duplicated missing-persons reports—but the truth is they have no idea exactly how many people were crammed into the dangerous, outdated public-housing block that stands in London’s richest borough. The average price of a property (taking into account studios, larger apartments, and mansions) is over $1.5 million in Kensington and Chelsea. Neighbors include the royals William, Kate, and Harry.

Yet the poverty-stricken occupants of the doomed tower had begged the authorities to listen to their fears of a major fire for years.

Fed up and in despair, the Grenfell Action Group admitted defeat in November, comparing the Kensington and Chelsea Tenant Management Organization to the regime of Kim Jong Un and predicting that only a devastating inferno would force their landlords to act.

“We have blogged many times on the subject of fire safety at Grenfell Tower and we believe that these investigations will become part of damning evidence of the poor safety record of the KCTMO should a fire affect any other of their properties and cause the loss of life that we are predicting,” they wrote last year.

A blaze that is believed to have started in an apartment on one of the lower floors engulfed the building within 20 minutes. Residents who called the emergency services were told to shelter in place rather than try to escape. The authorities now admit that they may never be able to identify some of those victims.

As the smoke and flames grew more intense, some people are believed to have leaped to their deaths from the burning building. Children were thrown from windows to be caught by the crowds below.

Unlike the private high-rises built for wealthier families and businesses in Central London, Grenfell had no sprinkler system and only one staircase. The Times reports Friday that the cladding used in a refurbishment last summer has been banned in the U.S. for use on high-rise buildings. Those overseeing the construction reportedly opted to buy the $28 panels instead of the $30 fireproof panels; that decision is estimated to have saved around $6,000 in total.

With sporadic fires still burning in the blackened remains of the building—where at least 30 people are confirmed to have died—Britain’s leading politicians arrived on the scene Thursday. Their instinctive approaches to the horror could hardly have been more different.

Prime Minister Theresa May, who is trying to form a minority Conservative government after last week’s humbling election, refused to meet any of the survivors or members of the devastated community—presumably for fear of a hostile reception that would be captured by the cameras. Instead she met privately with the first responders who had risked their lives to deal with the blaze, then got back into her armored car and raced home to Downing Street.

Jeremy Corbyn, Labour’s left-wing leader, took an altogether different approach. He was seen hugging survivors, taking questions from infuriated residents, and demanding action to re-house those who have lost everything. As one woman broke down in tears sharing her fears for a missing 12-year-old girl, Corbyn put his arm around her shoulder and pulled her in tight.

Another woman told Corbyn: “Theresa May was here but she didn’t speak to any of us. She was shit.”

Just as she flunked her first prime ministerial election campaign, May has misread the mood of the public.

She has called for a full public inquiry into the fire, but the righteous anger brought to the fore by an avoidable catastrophe on this scale cannot be quelled so easily. Her failure to meet those affected by the disaster has drawn inevitable comparisons to George W. Bush’s response to Hurricane Katrina.

Michael Portillo, the former deputy leader of the Conservative party, said she should have been with the residents. “Alas Mrs. May has been what she has [been like] for the last five or six weeks. She wanted an entirely controlled situation in which she didn’t use her humanity,” he told the BBC.

With May’s grip on power so weak after an election, the Conservatives are terrified that Corbyn’s populist Labour Party stands on the brink of power. If the minority government falls, it is now possible to imagine that Labour would secure the most seats in an upcoming election.

Emboldened by last week’s results in which 40 percent of voters backed a radical left-wing Labour manifesto, Corbyn raised the prospect of seizing empty houses owned by foreign investors in order to shelter those families who were burned out of their homes high above London’s billionaire paradise.

“The south part of Kensington is incredibly wealthy, it’s the wealthiest part of the country. The ward where this fire took place is, I think the poorest ward in the whole country,” Corbyn said in the House of Commons on Thursday. “Properties must be found, requisitioned if necessary, in order to make sure those residents do get re-housed locally. It cannot be acceptable that in London you have luxury buildings and luxury flats kept as land banking for the future while the homeless and the poor look for somewhere to live.”

His words will seem appealing to many when set against the apparently unmoved Conservatives.

Last year, Labour tabled an amendment to a housing bill that would require private landlords to ensure the properties they were renting out were “fit for human habitation.” It was voted down by the Conservatives, who argued that the move would force up rents.

The law change would not have affected public housing like the tower that caught fire this week, but it has captured the mood. According to Parliament’s register of interests, 72 of the MPs who voted against the amendment were landlords themselves. A list of those MPs became popular on social media last year and the roll call of shame has returned with a vengeance in the days since the flames swept through Grenfell.

To make matters worse for the Conservatives, Gavin Barwell was the housing minister until this month, and he failed to deliver a promised review into fire risks in high-rise buildings. May appointed him as her new chief of staff just four days before the devastating fire.

Helped by May’s clumsy politicking, Labour unexpectedly succeeded in turning the London Bridge terror attack into a debate about cuts to public services. The same issues are being debated in Britain today, not least since Conservative cuts—overseen by Foreign Secretary Boris Johnson in London—have resulted in drastic reductions in the fire service. In London alone, 10 fire stations have been closed down, 27 fire engines scrapped, and 600 firefighting jobs have been lost since 2010.

With the economy already straining under the threat of Brexit, Britain could be ready to usher in the most left-wing government in its history.