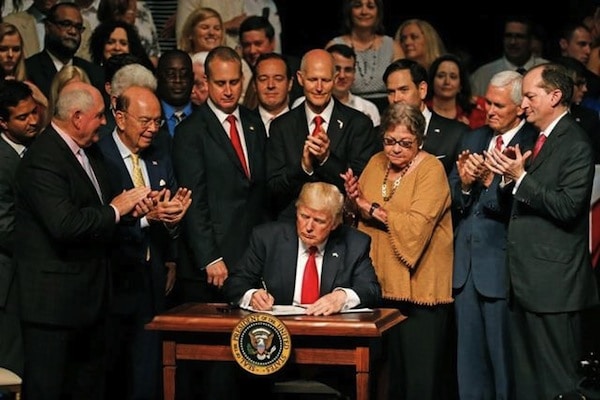 US policy toward Cuba (Trump reverses Obama’s Cuba deal, limiting travel and trade, 17 June) has been hijacked by a clique of Cuban-American politicians, who have sold their support in Congress to President Donald Trump. Above all, these individuals – and Trump – have demonstrated the corrupt and clientelist nature of the US political system. Can such a system serve as a symbol of “freedom” to anyone in the world?

Cuba’s medical brigades serve in over 100 nations, tending to the poorest and most disadvantaged – and they were instrumental in controlling the Ebola epidemic in Africa, a feat acknowledged by the WHO. It has one of the world’s highest physician-to-population ratios, the longevity of its population is comparable to that of the US, and Cubans receive free healthcare, education, housing, pensions and employment security. Cuba has no drug traffickers, drug addiction, gangs, mobsters, homelessness, illiteracy or malnutrition. The country’s advances in biotechnology stand alone in Latin America, as a symbol of what a small nation with very limited resources can do.

These accomplishments were achieved despite a punishing 55-year-old embargo perpetrated by the world’s most powerful nation – which has included innumerable acts of economic sabotage, espionage, assassinations and military aggression.
Luis Suarez-Villa
Professor emeritus, University of California, Irvine

While US-Cuba diplomatic relations were renewed by Barack Obama and limited openings have taken place, the reality for Cuba has been a continuation of the aggressive policies from its superpower neighbour. US citizens are only allowed to travel there under special licence, international companies are still being fined for trading with Cuba, and trade and investment in the island is stifled by the threats of severe penalties against those breaking the blockade.

In October 2016 a Cuban motion was passed at the UN calling for an end to the blockade. In November 2015, the Co-operative Bank closed the Cuba Solidarity Campaign accounts in the UK as a direct consequence of US blockade policies. Niall Booker, the bank’s CEO, confirmed that the closure was due to “risk” arising from “the sanctions that are in place imposed by Ofac [the US Treasury’s Office of Foreign Assets Control]”.
Rob Miller
Director, Cuba Solidarity campaign