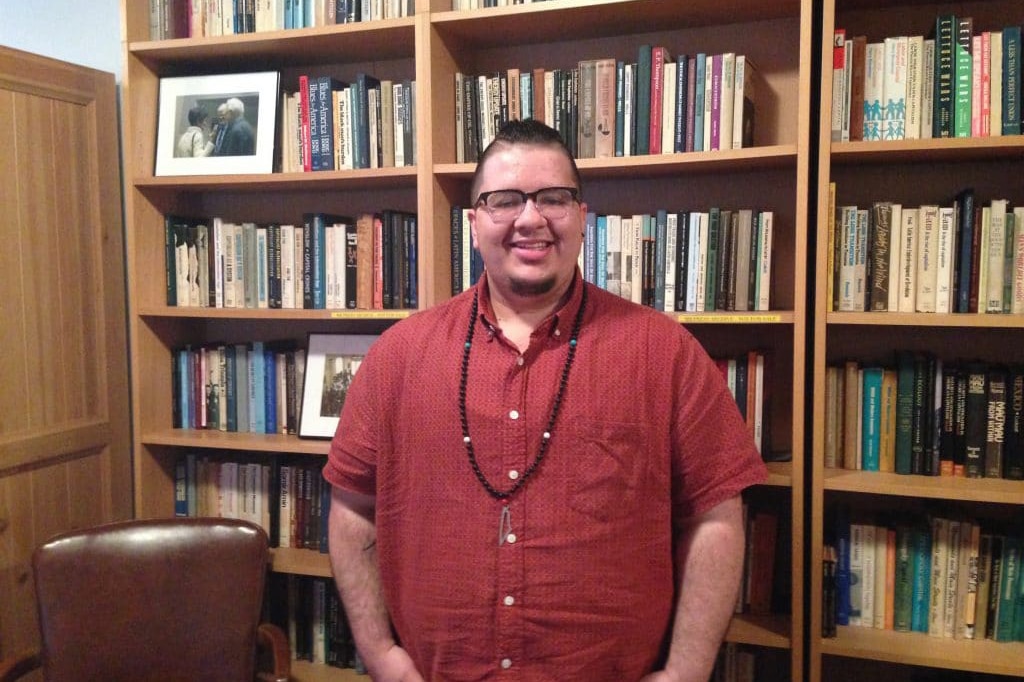 This year, Ramadan – the ninth month of the Islamic year, in which observant Muslims fast to commemorate the revelation of the Quran – happens to coincide with most of Gay Pride month. Quiet as it’s kept, there are uncounted numbers of queer Muslims in the gay community. One of them is Izzadine Mustafa.

Izzadine was born 25 years ago in Albuquerque, NM. His father, a Palestinian Muslim, and his mother, a white Christian, raised him and his two brothers Muslim. They also raised Izzadine female, but when he was 21 and in college, he came out as a transgender man and began, he says, to reinvent himself. He’d always wanted to live in New York, so Izzy’s now here; he’s queer; and – with due journalistic objectivity – he’s slightly awesome. I started by asking him what it’s like, combining Ramadan with Gay Pride. 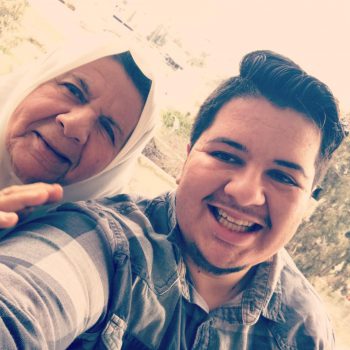 IM: Ramadan is a way for me to reflect and recenter myself, and Pride is a month when I’m surrounded by queers and we make community from that. Muslims break our daily fast at dinners called Iftars. So it’s been really cool, attending Iftars with other queer Muslims, celebrating Ramadan as well as Pride month.

SD: How did your parents meet?

IM: My dad grew up in the occupied West Bank, in a village near Nablus called Jama’in. He got a scholarship to a school in Washington, DC, but then he lost it. He couldn’t afford much, so he found the University of New Mexico, which is the cheapest school in the country. He studied business management and actually met my mom in Arabic class. He wanted an easy A and my mom, who’s from Texas, wanted to learn Arabic.

SD: Tell me about being a trans organizer.

IM: It’s really important for me say that I’m a transgender man. Part of the reason I’m out-loud about my trans-ness is that, even within leftist and liberal spaces, trans folk are not that common. There’s lots of stereotyping and ignorance around who we are. Also, I come to the trans community with a lot of privilege, in that I’m a masculine transgender man. I pass. I walk through the world and people don’t recognize that I’m trans. So I have a lot to learn from the trans community.

I want to be there, especially for young trans people. When I make public that I’m transgender, Muslim, and Palestinian, I get lots of messages from trans kids who are Muslim and struggling with their identity. It’s important for me to show them that it’s going to be OK, you know?

SD: What do you think you bring to Islam as a trans person?

IM: Perspective. Being a trans man, I understand both gender roles. I’m not blinded by the arrogance and entitlement that societies instill in boys at an early age. I’m hoping to bring to the Muslim community the message not to sweep these issues under the rug. Muslims are so diverse; we’re not a monolith. There are many Muslim communities throughout the world that accept trans folks. I hope all Muslims can see that there are trans and queer Muslims, and that’s OK – because there’s now this global resurgence of white supremacy raining down on everybody. But we’re all in this together. My main mission – why I do this work – is not only for my people but for the collective liberation of everybody.

SD: And do you think celebrating Gay Pride is liberating?

IM: Pride is when LGBTQ people express themselves; it’s a momentous month. But the reality is that Pride is giving more and more space to groups who oppress people, such as the NYPD, the Israeli military, such as politicians who honestly don’t care about many LGBTQ lives.

In 2013, I went to the New York City Pride Parade – my first since I came out as queer, trans. I was carrying a sign that said, “Don’t Pinkwash Israeli Apartheid.” And a man from the Israeli LGBTQ contingent came up and started yelling, “You’re a terrorist supporter, you’re a terrorist!” Then he spit in my face.

SD: Why were you carrying that sign at a Pride march?

IM: I felt it was important because pinkwashing is one of the things I’m passionate about as a Palestinian trans person and part of the queer community. Pinkwashing is a way the Israeli government covers up the occupation and its human rights abuses against the Palestinian people, my people.

For instance, there’s this campaign called Brand Israel that tries to make Israel look like a gay haven. They say, “LGBT folks of the world, come to Israel. We have a huge Pride; we offer acceptance.” They go to college campuses and queer communities and say things like, “Palestinians don’t accept queer people; they’ll kill you.” This is basically an Israeli far rightwing government, saying they’re LGBTQ-friendly. But when I go home to Palestine, the Israelis don’t see me as LGBTQ; they see me as a Palestinian – and they’re really racist about it.

What Palestinian queers say is, “Of course there’s anti-LGBTQ sentiment in Palestine. Just like in America and all over the world – even in Israel.” I, as a Palestinian trans person, do not want a government giving us legitimacy when it’s used to justify the oppression of my people.

SD: So you’ve actually been to Palestine and Israel?

IM: I grew up in a very white, middle-class neighborhood. But as my dad says, “To know where you’re going, you have to know where you’re coming from.” So when I was nine years old, my parents started sending me and my brothers to the West Bank village where my dad’s family lives. After that, we would go almost every summer, partly to help out my grandmother; partly to see there was more to life than growing up in a cozy American neighborhood.

The first time I went, it was around 1999, before the second Intifada. I would see barbed wire, checkpoints, soldiers, everyone speaking two different languages. It was shocking for me and confusing because here I am, used to just hanging out on the playground with friends. But it was also good to bond with my cousins, who were around my age, and I got really close to my grandmother. As I got into my teenage years, I started to understand the full scope of the occupation.

I’d return to school in August and start debates with my teachers about Palestine. I’m of the 9/11 generation, so there were constant conversations about the wars in Iraq and Afghanistan, the war on terrorism. Palestine would be thrown in, in history class, even in English classes, so I would challenge my teachers on their bigoted statements. In my junior year in high school, I was the newspaper editor and I ran a few pieces on Palestine. Each time I got in trouble.

SD: Why did people object?

IM: Point blank, because many people subscribed to the ideology that Israel should be a land for Jews only. They saw me as challenging that, even though the majority of my friends were of the Jewish faith.

I remember in middle school going to all the bar mitzvahs. Then in high school our friendships started changing. There was this program that would send Jewish kids to Israeli high school for a semester and they would learn how to train in the army. They’d come back and we’d get into these extensive arguments, concluding we couldn’t be friends. I’d say, “You want to join in on the oppression of my family? I’m not going to stand for that.”

IM: There are a number of Palestinian organizations in Israel and the West Bank that work on sexual and gender diversity. There’s Al Qaws, which provides services to queers, and counters Israel’s message that Palestinian queers don’t exist. They also say, “We don’t support this occupation.” And there’s this Facebook page called “Pink Watching Israel,” which is a committee of Palestinian queers and allies. Gaza is a separate situation because they’re under siege, so it’s harder to express any kind of freedom there.

SD: There are about 6,000 Palestinian political prisoners, and I recently read news accounts about some going on hunger strike.

IM: We called it the Dignity Strike. For forty days, about 1,500 Palestinian political prisoners refused to eat. And they won. In Palestine, everyone knows somebody who’s been or is now in Israeli prisons. One in four Palestinian men have been imprisoned in their lives. You have 500 to 700 children prosecuted in Israeli military courts. Kids as young as eight years old are sent to prison. Israel will kidnap a child from their home during a night raid and take them to prison. Their parents have no idea where they are or what’s happening to them. So this was a hunger strike for the most basic demands, like family visitation rights. And the children won better access to see a lawyer and their parents.

I wasn’t involved in the organizing, but I tried to push it into the media. The hunger strike, like the Boycott, Divest, and Sanction movement, used nonviolent tactics to pressure Israel to respect our basic human rights. What this strike did was to galvanize people; to unify Palestinians across Gaza, Israel, and the West Bank. It’s a long time since that happened. It’s the prisoners, we hope, who will unify us as a people.

SD: Has prison affected your family?

IM: One of my uncles deals with mental health issues because of the torture he got when he was 18, 19 years old. He was arrested for participating in demonstrations during the first Intifada and was in prison for years, beginning as a teenager. Every time I go home to my village, there’s always a celebration for somebody who spent years in prison and is just coming home. It’s like a weekly occurrence.

SD: Is there anything that inspires you in all this?

IM: Movements toward justice and liberation. Like the Movement for Black Lives, Standing Rock, and Black Lives Matter. I’ve also noticed there’s been a resurgence of people working on rights for undocumented immigrants, for women’s rights, LGBTQ rights. We seem to be coming together around issues that connect but also separate us. I’m seeing cross-movement building and so many people willing to learn about the occupation of Palestine. I also think there are more young Palestinians who are no longer silent. Growing up, lots of us would hear from our parents, “Don’t talk about Palestine,” for fear of repercussions. Now, there’s young, fearless Palestinians in Students for Justice in Palestine, the Palestine Youth Movement, and a few organizations like Jewish Voice for Peace and Black Solidarity with Palestine. We’re working hand-in-hand, saying, “We’re not afraid.”

Also more people are seeing that the Arab and the Muslim worlds are not the enemy – our enemies are those who try to pit us against each other. So there’s things to be inspired by in this dark, dark time.

SD: How was coming out to your family?

IM: I was worried at first, because growing up in this country, you mostly hear stories of families disowning kids. So I went into it hoping for the best and expecting the worst. But when I came out to my parents, they were actually accepting and welcoming. It took my mom a little longer because she was like, “Oh, I’m losing a daughter.” But I’m their son, now. And when my dad told my grandmother in Palestine about me being trans, she was like, “Amazing! I have a third grandson!”

You know, I’m not the most religious person. I don’t pray five times a day, I don’t go to the mosque often. But something that has grounded me in Islam is the idea of embodying God, right? Or trying to. Compassion, being good to people and to living things. What’s kept me going are those values of love, patience, and good deeds. Yeah.