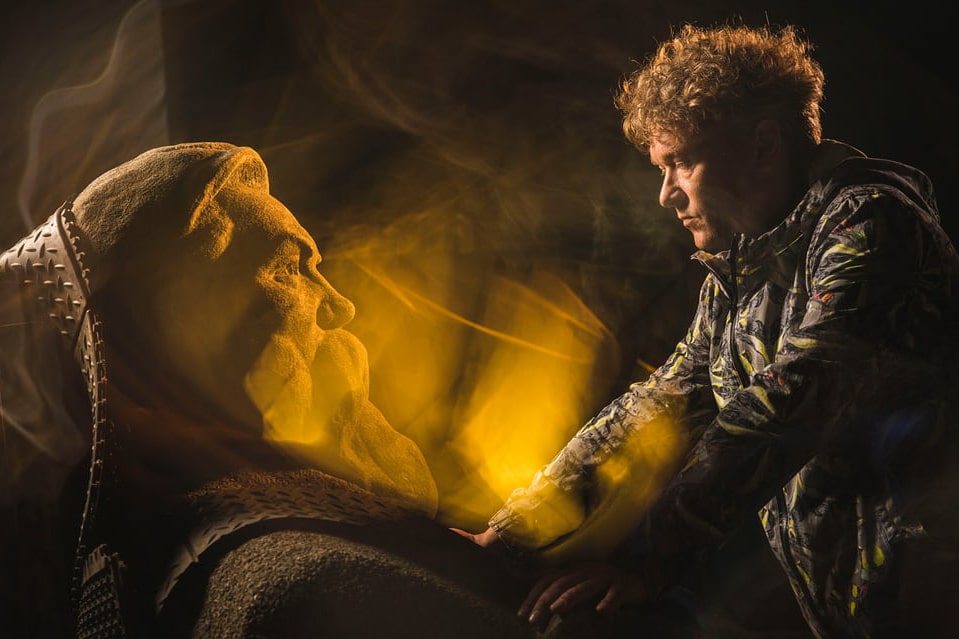 Face to face. Phil Collins and the lichen-encrusted statue. Photograph: Matthew Lloyd for the Guardian.

This month, the Berlin-based, British-born artist Phil Collins transported a 3.5 metre statue of Friedrich Engels from a village in eastern Ukraine, through Europe, to Britain on a flat-bed truck. Next month, during the Manchester international festival, the sculpture, a 1970s concrete image of the bearded revolutionary, will be erected in the city where he researched The Condition of the Working Class in England, its new permanent home.

Engels lived in Manchester for more than two decades in the mid-19th century, honing his revolutionary philosophy through his observations of the horrific conditions endured by the working children, women and men in that cradle of industrial capitalism. And, as Collins points out, though the philosopher’s life in Manchester is well studied and documented, there is no permanent marker to him in the city, no visual symbol of the man at all—despite the fact that his Manchester-forged thinking changed the course of 20th-century history.

This will be rectified on 16 July when, from its new perch in Tony Wilson Place, the lichen-encrusted figure with its air of “emphatic lyricism”, as Collins puts it, will gaze out over the contradictions of the “northern powerhouse”: its newbuilds, its post-industrial aspirations, its wealth that, just as it did in the 1840s, sits cheek by jowl with poverty. Perhaps it will foment revolution. 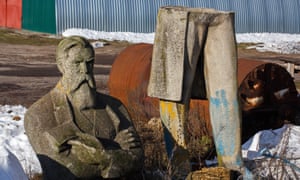 Collins’s recent works (he was shortlisted for the Turner prize in 2006) have often burrowed into communist and post-communist history. A pair of films, Marxism Today and Use! Value! Exchange! (2010) examined what became of the teachers of Marxist theory in East Germany. One day they were teaching compulsory lessons in the DDR’s schools; the next their subject was obsolete. In Use! Value! Exchange! Collins filmed such a teacher giving one of her old lessons to a contemporary class, at the school she had both studied at and, before the fall of the wall, taught in. The footage was intercut with scenes of a statue of Marx being physically shifted from a commanding spot in Marx-Engels Forum in Berlin to a less prominent position.

Collins is interested in such acts of translation—the teaching that travels through time, the statue that travels through space. The abrupt shift in significance for the objects and ideas associated with communism fascinates him. “What happens to the symbols of your childhood when they are contaminated by the fall of the wall so that the only prism you can see it through is the prism of dictatorship, rather than life and love and friendship and all the other things that happened in everyday society?” he asks.

This is where the moving of the Engels sculpture to Manchester comes in. Since 2015, the signs and symbols of the former communist era have been outlawed in Ukraine. Statues and murals are supposed to be removed and destroyed, and streets renamed. “But a lot of towns don’t know what to do with the sculptures. There’s no rationale for what to do with these icons or monuments, or what method of destruction to use,” says Collins. Sometimes the statues are left in a strange limbo—removed from their old spots, but left to moulder quietly out of the public gaze—for who knows whether one day they will be needed again? 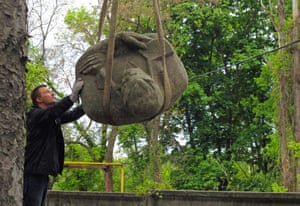 We have lift-off. Engels begins his journey to Manchester . Photograph: Shady Lane Productions.

It took nearly two years to track down a suitable statue of Engels. Finally one was discovered in the village of Mala Pereshchepina, in a district formerly named after Engels in the Poltava region of eastern Ukraine. It had been deposed from its central position in the village, cut in half at the waist, dumped in an agricultural compound and covered over with large raffia bags. It had the traces of pale-blue and yellow paint on its legs, the Ukrainian national colours.

Eight months of negotiation followed, for the sculpture was in a legal, as well as physical, limbo. But it wasn’t a “wrangle or a barter”, says Collins. It was a gift—albeit one that necessitated a lot of paperwork. Its appearance in Manchester will be another translation—a statue abruptly transplanted from one edge of Europe to another, but also from one sense of history to another, and from one community to another.

Engels is not an uncomplicated figure. If he is discredited in Ukraine, associated with a cruel and inhuman regime, then one might ask what business Collins has in commemorating him in Manchester. The artist, however, like a number of his biographers (including V&A director and former Labour MP Tristram Hunt, author of The Frock-coated Communist), forbears to hold him responsible for the atrocities committed under communist regimes in the mid-20th century, and points out that “millions of lives have also been squandered via the interpretation of the words of other figures”—not least Christ.

“Manchester is a meeting point. It represents both the birth of capitalism and the factory system and the magic of capitalism, the magic of surplus value. But Manchester is also a site of resistance to that—of the Chartists and the 1842 general strike and the suffragettes and the Vegetarian Society,” he says. It’s this latter, radical side of the city that can’t be found, says Collins, among its memorials and statues and street names. The sculpture of Engels will subtly shift the balance. 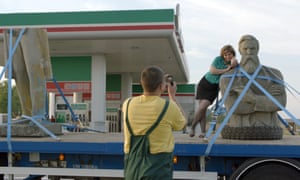 Engels has often played second fiddle to Marx. That was true in life, when the younger man toiled away to support the Marx family, and when, after his friend’s death, he completed Capital from Marx’s notes. But, just as many thinkers looked at Marx afresh after the 2008 financial crisis, it is to Engels that some have turned as Britain reaches a crisis of austerity. Engels’s early work, The Condition of the Working Class in England, was written after a sojourn in Manchester between 1842 and 1844, where he was sent from his home in Barmen near Wuppertal in Germany to learn the family business: the Engelses were wealthy cotton-mill owners with interests in Manchester.

The book, which was translated into English only in the 1880s, makes pretty grim reading in 2017. He wrote, in Florence Kelley Wischnewetzky’s translation, of the “tender concealment of everything which might affront the eye and the nerves of the bourgeoisie”, and of Manchester, a city so in hock to profit that “no hole is so bad but that some poor creature must take it who can pay for nothing better”. Engels repeatedly used the phrase “social murder” to describe the conditions in which the proletariat were obliged to live. It is hard not to think of Grenfell Tower.

After the 1848 revolutions in continental Europe, and the publication of his and Marx’s Communist Manifesto, Engels returned to Manchester, living there from 1850 for another two decades. He established two lives: one of the capitalist, the other of the revolutionary. On the one hand, he was the bourgeois industrialist, working for the Engels firm, on the other his lover was Mary Burns, a poor Irish immigrant who was Virgil to his Dante in the slums of Manchester (after Mary’s death, he transferred his affections to her sister Lizzie, a passionate Fenian). 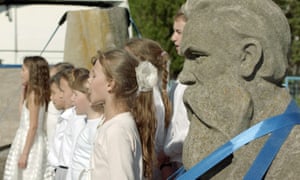 Songs for Friedrich. Engels is joined by a choir in Kharkiv, Ukraine. Photograph: Shady Lane Productions

It is to precisely such contradictions that Collins was drawn. “He was bound to the system in a way that a lot of us are,” he says. “His resistance within the system is very familiar. There is no anterior position now, no position outside the system. You take an easyJet to an environmental conference. We are all compromised by the system and articulate resistance within it. He’s a perfect reflection of our problems today.”

While the statue was found and acquired, Collins was working in Manchester, where he has been largely based since October. He began working with local organisations—crisis centres for homeless people, Get Ready for Work clubs and others—learning of people’s experiences under the past seven years of austerity measures. The results of these investigations will form part of a new film that will accompany the inauguration of the statue—an inquiry, of sorts, into the condition of the working class in England, in the spirit of Engels. There is one crucial difference: the voices of the people Collins encountered will take centre stage, which marks a change from Engels’s book in which the Mancunian workers themselves are mostly silent. What has struck Collins forcibly, he says, is “a new concealed language” used to mask the grimness of life among Britain’s precarious poor.

He is referring to euphemistically named schemes such as workfare, which obliges people to work for free, sometimes for profit-making companies, in return for receiving benefits. “The way the benefits system works is so byzantine and so ugly, and named in ways that people don’t understand. That for me is the central point—the systems built over the past seven years mean there is a lack of care between us and towards the most vulnerable,” he says. We are living “in a time of absolute prosperity but we are unable to see the stress and misery of people living with measures like the bedroom tax, of people suffering under forms of hidden punishment that is meted out to, broadly, migrants and immigrants.” These people are, he argues, the new proletariat.

On the day of the grand inauguration, the film will be shown to the public on a big screen in the neighbouring car park, and workshops and events will take place in what the artist is calling “Engels Exchange” in Tony Wilson Place—discussions with academics and activists, poster- and banner-making workshops, a “dress up as Engels” stall, a Mary Burns lookalike competition. “If you only have a party, you don’t honour his importance,” says Collins. “If you only have a serious discussion, you lose part of his froth and love of life.”

At the moment, awaiting removal to its new home, the sculpture sits in a crepuscular old depot near Piccadilly station. When we went to visit it, forlorn under its protective wrappings, Collins greeted it like an old friend. They had bonded on their journey from Ukraine. The sculpture had been sung to by a children’s choir on the Ukrainian border and been the subject of artists’ performances in Berlin. It had passed through Engels’s birthplace in Barmen. Now it was awaiting the last leg of its long journey, and its new life.