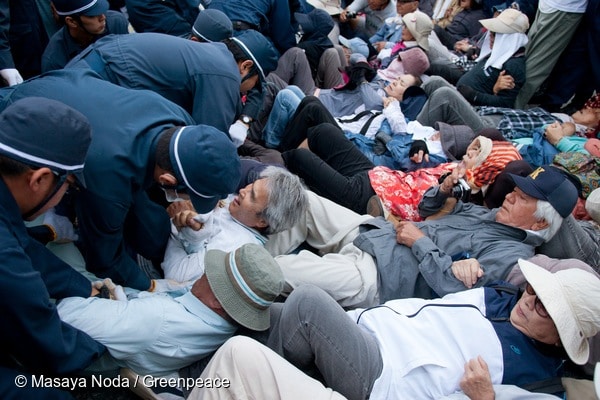 People of Okinawa being removed by the police as they were protesting against the planned expansion of a U.S. military base at Camp Schwab, Nago, Okinawa, Japan.

My family moved to the United States from Okinawa when I was 7. But Okinawa is still home — and I’m hurt and angered at how the United States and Japan continue to treat Okinawa as little more than a colonial outpost. As a teacher, I’m even more dismayed at how the conventional school curriculum keeps young people in this country ignorant about the abuse, but also about the resistance, in my home islands.

“They are burying our beautiful ocean,” read the recent message from my mother in Okinawa, as though she was grieving the loss of a loved one. After decades of protest by Okinawan people to completely get rid of all U.S. military bases that occupy a fifth of the Ryukyu Island chain, the United States and Japan signed a treaty to evacuate one of the most contested bases located in the center of the main island, Futenma Marine Corps (MCAS) base. In exchange for the removal, both governments announced that they would construct a floating military base off the northeast coast of Henoko. Okinawans expressed vehement opposition, with a majority voting in a referendum for the complete removal of all bases. Still the construction continued and the people persisted in protest — marching for miles down main streets, creating human chains for peace, linking arms around military bases, elders repeatedly lying down in front of bulldozers. Governor Takeshi Onaga demanded the Japanese government terminate the heliport construction and city mayors prevented access of U.S. military construction vehicles through their districts — later overturned by federal court order last December sought by the Japanese federal government.

Today, the concrete seawalls are finished, and soon, rocks will be crushed and sand will pile high, burying the tropical, clear waters. The Japanese government and U.S. military continue to pursue the construction of the runway, despite community complaints of environmental damage and pollution, endangerment to sea life, harm to the fishing and tourism industry, as well as the ongoing threat to cultural survival and island sovereignty. On July 6th the Ryukyu Shimpo announced that the Japanese government would not return the land occupied by MCAS Futenma to the Okinawan people. The U.S. and Japan added a condition to the promise for Futenma’s removal: The Naha International Airport must be made available for the U.S. military any time they declare an emergency. When Governor Onaga rejected this demand, the U.S. military withdrew its promise to remove Futenma. Japanese Defense Minister Tomomi Inada stated, “If the requisite conditions for the return of Futenma are not met, it will not be returned.” In a surge of anger, pain and frustration, word spread quickly in Okinawa across social media.

Devastated at the sacrifice of my home, I turned to the news here in the United States, and there was not one story about Okinawa on any major network. Frustrated, I recalled my conversation with an elderly grandmother I met at a peace rally in my neighborhood when I went home last summer. When I told her I was a teacher in the United States, she told me that the best thing we as teachers can do is to teach kids about what’s happening in Okinawa and how we want a world without war. She said, “They need to know our story so they can stand up with us.”

But when I turn to a typical U.S. textbook, I see how students are ill-equipped to understand what’s happening in Okinawa. For example, in Holt McDougal’s widely used The Americans, there are a mere three paragraphs about Okinawa under the section, “The Atomic Bomb Ends the War.”

Discussion of Okinawa begins and ends with a skewed description of the Battle of Okinawa during WWII: “In April 1945, U.S. Marines invaded Okinawa,” it begins. “By the time the fighting ended on June 21, 1945, more than 7,600 Americans had died. But the Japanese paid an even greater price — 110,000 lives — in defending Okinawa.” Okinawans are completely invisible in this account of the war, the bloodiest battle in the history of the Pacific, where our islands were used as a battleground between the United States and Japan. The highest cost was in Okinawan lives, where more than a third of the population was killed within three months — almost 150,000 — and more than 92 percent were left homeless. The majority of today’s families — including mine — have experienced grief and loss of loved ones.

What The Americans does not teach is that Okinawa was once an independent kingdom, was colonized by Japan, then controlled by the United States for 27 years, and finally became a Japanese prefecture. At the end of the war, the U.S. military stripped Japan of its constitution and replaced it with one that took away Japan’s right to have an offensive military. Henceforth, the United States would “protect” Japan, and create bases throughout Japanese territory. However, three-quarters of all U.S. bases on Japanese territory are on Okinawa, even though Okinawa makes up only .6 percent of Japan’s total landmass. Okinawa’s main island is just 62 miles long; and its width averages one mile.

MCAS Futenma was constructed in the middle of our skinny island — creating environmental destruction, air pollution and noise pollution, blocking direct access to roads in a densely populated community, and exposing survivors and families to the sights and sounds of war. Frequent violent crimes against women and children continue to bring hundreds of thousands of protesters together demanding justice and humanity — and the complete removal of U.S. military bases.

Not only do commercial textbooks fail to equip students to understand what’s happening in Okinawa, the mainstream school curriculum does not help students understand issues affecting island people more broadly. I have seen time and time again the shock when my high school students in Portland, Oregon, learn about the U.S. military’s long-standing nuclear testing in the Marshall Islands, the environmental damage to Vieques in Puerto Rico, or the history of U.S. military trainings on indigenous Hawaiian soil. Many of my students are confused when they learn that Guam is a “U.S. territory,” has the highest per capita U.S. military enlistment, has a huge U.S. base presence, but its people have no right to vote in U.S. elections. When I talk about the International Women’s Network Against Militarism, students wonder why women from places with high U.S. military presence — the Philippines, South Korea, Hawaii, Puerto Rico, Guam and Okinawa — gather regularly to talk and organize.

The elderly grandmother from the peace rally told me that we must teach the children “that we have been fighting because we have always wanted peace but now we need the world to fight with us. Go back and tell our story.” Our story though, is much more than three short paragraphs in a textbook. It is a story about a people’s determination for sovereignty in the face of imperialism, resilience in midst of colonization, and perseverance for peace as survivors of war. Our story is urgent and it is a call for global action in the name of peace and justice. The history of Okinawa is a story of resistance but also a call to the world.