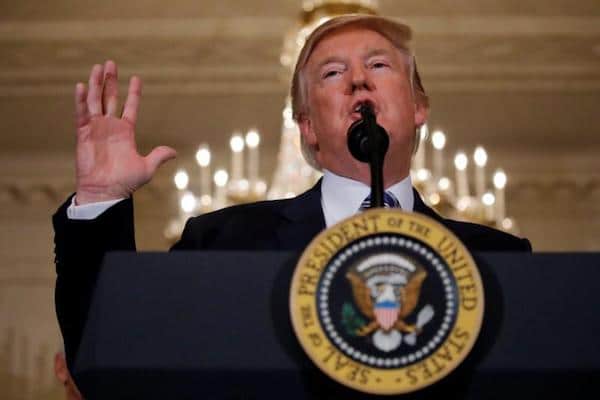 U.S. President Donald Trump speaks during a “Made in America” products showcase event at the White House in Washington, U.S., July 17, 2017.Carlos Barria

The United States government has imposed new sanctions against thirteen high-level Venezuelan officials in the run-up to elections to select candidates for a National Constituent Assembly (ANC) on July 30.

The initiative to re-write the country’s constitution was announced by Venezuelan President Nicolas Maduro on May 1 as a way to bring about dialogue in the politically charged country, where anti-government protests have led to more than 100 deaths since the beginning of April.

However, the move has been opposed by the national opposition and international right-wing governments—including the US—who have said the only solution to the current impasse is for the elected leftist government to step down.

Washington confirmed Wednesday that the new sanctions were aimed at sending a warning to government officials that participate in the constituent process, in a last minute bid to derail the initiative.

“Anyone elected to the national constituent assembly should know that their role in undermining democratic processes and institutions in Venezuela could expose them to potential US sanctions,” said the US Treasury Secretary Steven Mnuchin.

“As President Trump has made clear, the United States will not ignore the Maduro regime’s ongoing efforts to undermine democracy, freedom, and the rule of law,” he continued.

According to a Treasury Department statement, the new sanctions will affect several high ranking officials in the armed forces and national government, who Washington accuses of violating human rights.

Amongst the military officials to be targeted by the sanctions are Venezuelan Interior Minister Nestor Luis Reverol Torres and Sergio Jose Rivero Marcano, the commander of Venezuela’s Bolivarian National Guard. Other officials working in state development banks, state oil company PDVSA, and the National Center for Foreign Commerce, were also included in the sanctions list for alleged corruption.

Caracas hit back at the sanctions almost immediately Wednesday evening, describing them as an “illegal” attempt to intervene in Venezuela’s sovereign affairs.

“We do not recognize any sanctions,” said President Maduro, who also confirmed that the ANC elections would still go ahead on Sunday.

The Trump government’s latest sanctions against Caracas come just two days after Venezuelan Foreign Minister Samuel Moncada publicly revealed that the US Central Intelligence Agency (CIA) was working alongside governments in Mexico and Colombia to topple the Maduro government.

Moncada was referring to an international security forum held by the Aspen Institute on July 19-22, in which CIA Director Mike Pompeo commented that the US was “hopeful about a transition” in Venezuela and revealed that he had held talks on the issue with the Mexican and Colombian governments.

“I was just down in Mexico City and in Bogota a week before last talking about this very issue trying to help them understand the things they might do so that they can get a better outcome for their part of the world and our part of the world,” stated Pompeo.

“At any time you have a country as large and with the economic capacity of a country like Venezuela, America has a deep interest in making sure that it is stable, as democratic as possible. And so, we’re working hard to do that,” he also stated.

The United States government has previously sanctioned several Venezuelan officials in 2014 and again in 2015 under the government of former US President Barack Obama, who signed an executive order declaring Venezuela an “unusual and extraordinary threat” to US national security.

Since coming to the White House in January 2017, President Trump has consistently expressed his administration’s hostility to the Maduro government, while forging links with the Venezuelan opposition.

Several legislators and senators from both the Democrat and Republican parties have consistently pressured Trump to impose harsher sanctions on Venezuela throughout 2017.

In February, the Trump administration sanctioned Venezuelan Vice-President Tareck El Aissami over drug trafficking allegations. Washington has, however, yet to provide evidence to bolster the accusation against El Aissami, who is the highest ranking official to be targetted under the Foreign Narcotics Kingpin Act.