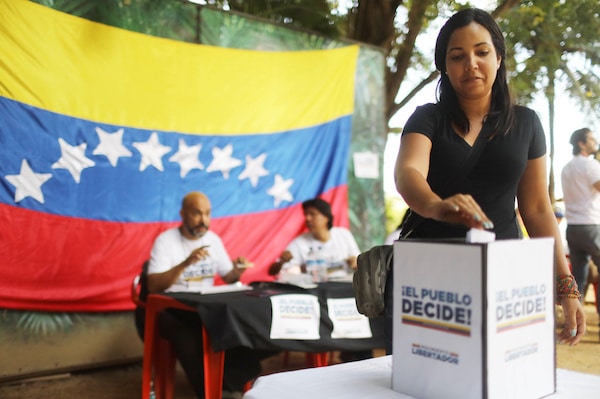 RIO DE JANEIRO, BRAZIL – JULY 16: An expatriate Venezuelan casts her ballot during an unofficial referendum, or plebiscite, held by Venezuela’s opposition against Venezuela’s President Nicolas Maduro’s government on July 16, 2017 in Rio de Janeiro, Brazil. Voting was conducted across 2,000 polling centers in Venezuela and in more than 80 countries around the world amidst a severe crisis in Venezuela. (Photo by Mario Tama/Getty Images)

“The balance of the day is extremely positive, because as we always say, peace won out, and when peace wins, Venezuela wins,” she declared on national television.

Speaking from the Plaza Bolivar in Caracas shortly after the CNE announcement, President Nicolas Maduro hailed the large vote total as indicative of the new body’s legitimacy.

“The National Constituent Assembly is born with a great popular legitimacy,” he affirmed.

According to CNE records, the total number of votes for the ANC surpasses the 7,587,579 votes received by Maduro in his narrow 2013 election victory and comes in as a close second to late President Hugo Chavez’s 2012 reelection triumph with 8,191,132 votes.

Sunday’s turnout likewise exceeds the participation in the 1999 consultative referendum on whether to convene a constituent assembly to draft a new constitution, which stood at 37.65 percent.

While the vast majority of the ANC’s 545 delegates were elected on Sunday, indigenous assemblies will convene this coming Tuesday in order to choose their eight representatives.