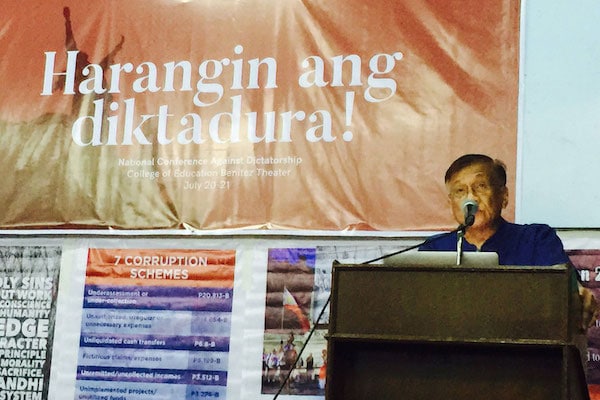 Intervention by Walden Bello at National Anti-Dictatorship Conference, University of the Philippines at Diliman, July 20, 2017.

Speech given by Walden Bello at the National Anti-Dictatorship Conference, University of the Philippines at Diliman, July 20, 2017.

Fascism comes in different ways in different countries, and even within the same country, it can appear in a different manner at a later date than it did earlier. The common view of how fascism comes to power is what we may brand the Marcos model of “creeping fascism.” First, there are the violations of civil rights and political liberties, then comes the lunge for absolute power, then indiscriminate, massive repression. Duterte reverses this process. First, there is massive repression, in this case, the indiscriminate killing of over 10,000 suspected drug users. Then the power grab, in this case the declaration of martial law, the first phase of which we have witnessed with the imposition of military rule in Mindanao. Finally, there’s the suppression of basic political and civil rights and liberties in an atmosphere that has been largely sanitized of political opposition. As opposed to creeping fascism, this is “blitzkrieg fascism.”

Fascist dictatorships are popular, at least at the beginning. The approval rating of this president remains at around 83 per cent. My sense is that even if he were to move towards formal dictatorial rule, Duterte would maintain a high degree of popular support. This is not unusual. Hitler was popular until the very end, and not even the allied invasion of Germany in 1945 could induce the Germans to revolt. While Duterte is popular across all classes, he is most popular among classes ABC, the elite and the middle class. Again, this is not unusual. The base of previous fascist regimes has been the elite and the middle class, and in the latter we include downwardly mobile sectors that are objectively workers but whose consciousness remain middle class and are resentful of their changing fortunes. It is from Duterte’s middle class followers that he draws his most fanatical disciples. These are the cyberbullies, like those who recently urged the execution of two female journalists and the “brutal rape” of one of our women senators. As with the Nazi Brownshirts or the SS, there is no reasoning with these people; they are hopelessly irrational.

While we must not give up on the middle class, it is mainly Duterte’s supporters in classes D and E that we should be concerned about. Unlike Duterte’s middle class base, whom we might characterize, using Gramsci’s terms, as exhibiting “active consensus” behind Duterte’s authoritarian rule, the lower classes that support the president might be said to be marked by “passive consensus.” We cannot understand why they have swung behind Duterte unless we take into consideration the spectacular failure of what I have called the “EDSA Republic” to meet their expectations during its 30-year reign. Instead of democracy, the EDSA Republic gave them oligarchy and massive corruption. Instead of security, it generated rampant criminality. Instead of providing opportunity, it deepened poverty and inequality. Instead of affirming the dignity of the poor and marginalized, it robbed them of it. The hypocritical democracy of the EDSA Republic is the principal reason why they are willing to give Duterte’s authoritarian project a chance.

Today will be remembered as the day the resistance to dictatorship was reborn. Future generations will look to the assembly here today and say, yes, there were people who were not intimidated by the popularity of an authoritarian personality and placed themselves in the line of fire to prevent the advent of a full-blown dictatorship. Hopefully, they will not look back to our fight as a lost cause. But to ensure that we will not go down as a noble but doomed enterprise, we have some very tough work ahead of us in order to win the hearts and minds of the sectors of our people who have grown skeptical of democracy’s ability to promote their security and protect them from the rapacity of the rich and powerful.

In the remaining time I have left, allow me to propose the key elements of an anti-dictatorship program.

First, we have to focus our energies on preventing the imposition of martial law nationally, which is the next step in Duterte’s path to dictatorship. Second, we must constantly remind people of the continuing bloodbath in poor neighborhoods, force them to confront a reality that many would prefer to pretend is not happening, and get them to realize that it is not a human response to be silent in the face of evil. We must make sure that our fellow Filipinos will not behave like the Good Germans of the Nazi era.

Third, we must expose the duplicity of a president who says he is a socialist but who has no programs for social justice, whose economic program explicitly says it will continue the neoliberal policies of his predecessor, who ditched his secretary of the environment when she stepped on the toes of the powerful mining industry, and who now enjoys the support of nearly all sectors of the elite, from the Marcos crony Ramon Ang to the Indonesian front-man Manny Pangilinan to the so-called Visayan Bloc in Congress that has blocked all efforts to continue agrarian reform.

Fourth, the people must understand that the democracy we uphold is not the old discredited electoral democracy where the elites bought and manipulated elections to keep themselves in power, a system that was democracy in name but oligarchy in essence. We must offer them a democratic program of which the radical redistribution of land and other assets will be key elements. In other words, we must be the agents of a genuine socialist democracy that makes equality and justice its centerpiece.

Fifth, we must make sure that our compatriots see us as fighting for the future, and not for a return to the discredited past. In other words, we cannot afford to have people associated with the old order, especially the Yellow Forces that dominated the EDSA Republic, be identified as leading the anti-dictatorship struggle. That would be suicidal. At the same time, we cannot afford to be led by double faced forces that say they are against dictatorship while at the same time serving in Duterte’s cabinet. Hindi na puedeng mamanca sa dalawang ilog. While all honest anti-dictatorship forces are very welcome to join our struggle, the question of leadership is another matter.

Let me end by saying that our task is enormous, and there is no guarantee of success. But we do not wage this fight because we are assured of a triumphant ending. We fight for a socialist democracy and against dictatorship because it is the right thing to do, because it is the only decent response to the darkness that threatens to swallow up our country. Thank you.