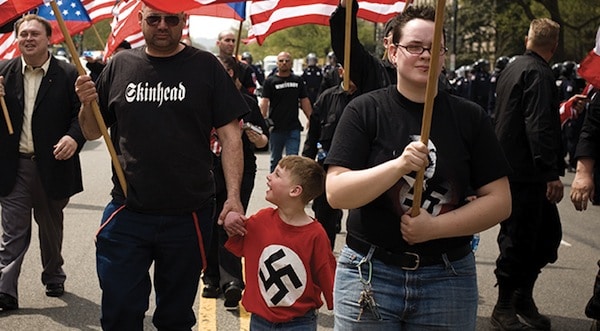 He used similar words in his victory speech in the wee hours of Nov. 9, even as white supremacists began to celebrate.

The problem is that Trump’s words are hollow.

His calls for the country to unite will continue to be meaningless as long he fails to take responsibility for his role in dividing it – something he conspicuously avoided again during his press conference today.

“It’s been going on for a long time,” Trump said. “Not Donald Trump. Not Barack Obama.”

It’s true. America has had racial strife since its founding.

But from the day he came down the escalator in the tower that bears his name, Trump consciously poured fuel on the fire. He ran a racist, xenophobic campaign that energized the radical right – that “unearthed some demons,” as U.S. Rep. Mark Sanford put it.

The day after Trump was elected, hate incidents soared. Many of them were carried out in his name.

Neo-Nazi David Duke, the former Klan leader who endorsed Trump during his campaign, had this to say about the deadly violence in Charlottesville:

Duke’s words reflect the views of a white nationalist movement that sees Trump as its champion.Let there be no mistake: This is a fascist movement that threatens not only extremist violence but our democracy as well.

All the while, Trump continues to employ as his chief strategist the former head of Breitbart News, Stephen Bannon, who has proudly boasted that he provided “the platform for the alt-right” – a fancy term for white supremacy in the digital age.

All the while, the Trump administration continues to play down the threat of white supremacist violence.

Trump calls for the country to unite. But he is still ducking responsibility for his role in dividing it.

Until he apologizes and takes responsibility for the damage he has caused and enacts policies to mend the wounds in our country, his words will continue to ring hollow.

Sign our petition and tell Donald Trump to reject hatred and bigotry.