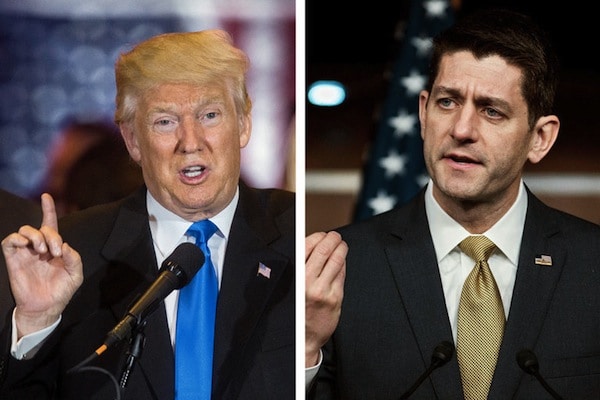 The world of Republican Twitter is ordinarily an overtly racist one. A highlight reel from the past few months alone includes former Arkansas Governor Mike Huckabee’s tweet to celebrate Cinco de Mayo by watching Speedy Gonzales cartoons, Iowa congressman Steve King’s anti-immigration tweet that “We can’t restore our civilization with someone else’s babies,” and Mississippi representative Karl Oliver’s post that anyone who tries to remove a confederate statue “should be LYNCHED!”

Oliver’s comments foreshadowed the violence that took place Saturday afternoon in Charlottesville, Virginia. A white nationalist barreled his car into a crowd of people showing their support for the removal of a Robert E. Lee statue. One person died from the attack. In the hours that followed, Republican politicians were quick to distance themselves from the accused murderer James Fields. “The views fueling the spectacle in Charlottesville are repugnant,” tweeted Paul Ryan. “Let it only serve to unite Americans against this kind of vile bigotry.”

While the public rhetoric of Paul Ryan, Mitt Romney, Mike McCaul, Jeff Sessions, and even Ted Cruz—who went as far as to describe Fields’ attack as an “act of domestic terrorism”—purports a staunch antiracist position, their actions, and the actions of the Republican party reflect the exact opposite. The party and its pundits continue to be the architects and public spokesmen for the destruction of the welfare state, higher rates of incarceration, a lowering of the minimum wage, totalitarian border control, and other policies that dispossess and hurt people of color disproportionally.

Republicans’ public outcry against the attack in Charlottesville serves to mystify the real politics of their party. If the great philosopher and social critic Roland Barthes were writing today, he would describe the mass denunciation of racism by Ryan and others as an example of “Operation Margarine.” In his book Mythologies, published after World War Two, Barthes expounds the way that politicians confess a “little evil” to “save one from acknowledging a lot of hidden evil.” Like an advertisement that admits negative effects as part of a larger process of persuasion, politicians cure doubts about the legitimacy of their party by the very ills created by their party. In the Republican case, the denunciation of blatant racism committed by the “alt-Right” acquits Republican politicians from accusations that they are the party of racism and violence in the United States.

As Branko Marcetic meticulously documents, the Right has a monopoly on political violence in the U.S. and around the world. The Southern Poverty Law Center concurs that racism is the hallmark of the Right, not the Left. From Howard Zinn’s landmark A People’s History of the United States to Henry H. Giroux’s recent America at War with Itself, history demonstrates that Trumps’ presidency opened a new chapter in the Right’s long genealogy of white supremacist violence.

This makes claims by Ryan, Cruz, and others that we are “united” in the fight against racism and violence all perplexing. Republican statements like “the hate and bigotry witnessed in #Charlottesville does not reflect American values” and “Hatred, racism, and bigotry have no place in our country” embody the worst in political chicanery . Like Cruz’s post-Charlottesville statement that America “was built on fundamental truths, none more central than the proposition ‘that all men are created equal,’” these statements are meant to create the facade that racism does not pervade American institutions, policies, and values. These public interjections by Cruz and his cohort also create the illusion that there does not exist fundamentally antagonistic interests in respect to issues of race and social justice in this country, especially inside the Beltway. However, according to Mitch McConnell and Pat Roberts, in comments that express the simplification and mystification of the real conditions of social and political life, there are only racists like James Fields, and then there is the rest of us. Or, from Donald Trump and Corey Stewart’s perspectives, “hatred, bigotry and violence” characterize “many sides” in America.

This nation was founded on racism and it remains one of the most persistent American values. As Princeton professor Keeanga-Yamahtta Taylor, a victim of Fox News’ public targeting of antiracist speakers this year, stated: “Racism is the sugar in the American cake.” It is also the sugar of the Republican party, not “many sides.” If people are to take antiracist work seriously, they cannot accept the public relations statements of rightwing politicians as a serious attempt to eradicate injustice and violence. Nor can we accept attempts to generalize hatred, bigotry, and violence so that they are no longer connected to distinct political groups and interests. As this tragedy unfolds, and policy decisions that have the power to decimate communities of color at home and abroad loom on the horizon, let us hope that people do not forget who the enemies of antiracism are. They won’t be crashing cars into protestors, but their policies should be treated with the same rebuke that we have for Saturday’s driver.

Adam Szetela is a writer, teacher and editor. He teaches at Curry College.