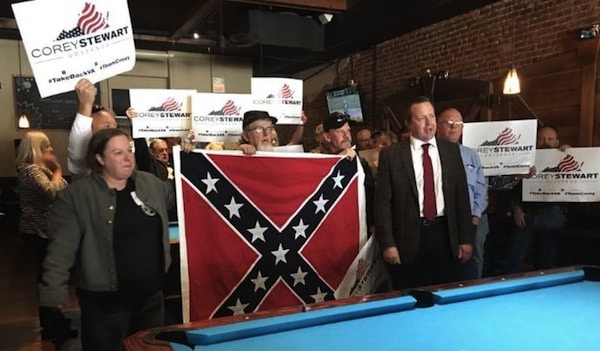 Meet Corey Stewart. From 2015 to 2016, he was chair of Donald Trump’s campaign in Virginia. When polls showed Hillary Clinton taking the lead, he was canned weeks before the election. However, this did not stop him from supporting The Donald. When Trump’s Billy Bush video came out, Stewart was one of the few prominent Republican politicians to defend him. He “acted like a frat boy, as a lot of guys do,” Stewart said at the time. As elected chairman of the Prince William Board of County Supervisors, Stewart was also the architect behind a policy that authorized Prince William police officers to check the immigration status of anyone they detained. As he frequently boasts, “I was Trump before Trump was Trump.”

Stewart, who is now actively campaigning for a seat in the U.S. Senate, released a video response to the violence in Charlottesville that was no less Trumpian than his previous statements and actions. In the video, titled “Where is the Condemnation of the Violence Perpetrated by the Left in Charlottesville?”, Stewart condemns leftists for agitating the violence that erupted. He explains, “There was a whole lot of leftwing agitators who went down there—by the way, some political officials—even after the governor told people to get out.” In his opinion, the victims of suspect James Fields’ grey Dodge Challenger would not have been killed and injured had they listened to authority.

If Stewart’s initial remarks were not enough to cement him as a white supremacist, he went on to explain that leftwing protesters not only brought on the tragedy that occurred, they were responsible for half the violence. “Clearly,” Stewart emphatically states, “half of that violence was committed by left-wingers.” It’s unclear where this percentile comes from, given that no antiracist protestors barreled a moving car into a crowd, leaving nineteen people in the hospital and one person murdered.

Never one to—in his own words, “fall in line” like other politicians—Stewart chastised Republicans who condemned Saturday’s vicious car attack. “For all you Republicans who went out there, you went beside yourselves, just to try and prove that you have nothing to do with the far, far, far right, you’re playing right into the Democrats’ hands.” For Stewart, Republicans have no affinity with James Fields and other white nationalists who perpetuate acts of violence. The overwhelming evidence that links the rise of the “alt-right” to America’s rightwing party and Donald Trump’s presidency does not exist in Stewart’s mind. As he explains, Republicans “have nothing to do with them” and “there’s no reason to apologize.”

In one final leap of logic, Stewart actually makes the claim that Saturday’s driver was not a conservative, but really a member of the “far, far, far left.” In a bizarre attempt to link the murder suspect to political correctness movements, Stewart states that conservatives do not try to stifle free speech, it is leftists who do. His final recommendation to all his viewers is not to fall for the “garbage” of the liberal media and to remember that there were two sides involved in Saturday’s violence.

Hopefully, Stewart’s dumpster fire of a video is enough to destroy his political aspirations. But, when the president blames Saturday’s hatred, bigotry and violence on “many sides,” and waits three days before half-hardheartedly condemning swastika-clad white nationalists, Stewart will probably win a seat in the U.S. Senate. In Trumplandia, anything is possible, especially if you are a racist.

Adam Szetela is a writer, teacher and editor. He teaches at Curry College.