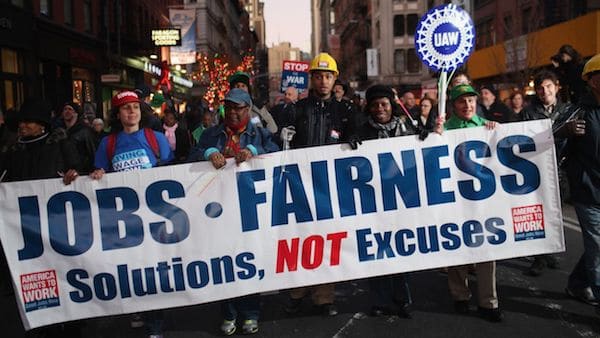 Members of labor unions and Occupy Wall Street demonstrators participate in a “March For Jobs and Fairness” on Dec 1, 2011 in New York City. Thousands attended the late afternoon rally which included members of over 300 New York City and tri-state unions. (Photo by Spencer Platt/Getty Images)

What is work like for Americans? The results of the Rand Corporation’s American Working Conditions Survey (AWCS) paint a troubling picture.

As the authors write in their summary:

The AWCS findings indicate that the American workplace is very physically and emotionally taxing, both for workers themselves and their families. Most Americans (two-thirds) frequently work at high speeds or under tight deadlines, and one in four perceives that they have too little time to do their job. More than one-half of Americans report exposure to unpleasant and potentially hazardous working conditions, and nearly one in five American workers are exposed to a hostile or threatening social environment at work.

The authors do note more positive findings. These include:

That workers appear to have a certain degree of autonomy, most feel confident about their skill set, and many receive social support on the job. Four out of five American workers report that their job met at least one definition of “meaningful” always or most of the time.

As the Survey’s introductory chapter points out, despite the importance of work to our emotional and physical well-being, social relations, and the development of our capacities to shape our world, little has been published about our experience of work:

Most Americans between the ages of 25 and 71 spend most of their available time in a given day, week, or year working. The characteristics of jobs and workplaces—including wages, hours worked, and benefits, as well as the physical demands and risk of injury, the pace of work, the degree of autonomy, prospects for advancement, and the social work environment, to name a few—are important determinants of American workers’ well-being. Some of these job characteristics also affect workers’ social and family lives. Beyond that, job attributes can affect individual workers’ productivity—and, thus, the well-being of their coworkers, their employer, and the economy at large.

Given the potential importance of working conditions, it is surprising that there is little systematic, representative, and publicly available data about the characteristics of American jobs today.

Here, then, is a more detailed look at some of the Survey’s findings:

More specifically, the survey revealed that:

In addition to physical demands, more than one-half of American workers (55 percent) are exposed to unpleasant or potentially dangerous working conditions. Sixty two percent of men and 46 percent of women are exposed to vibrations (from hand tools or machinery); loud noise (defined as “Noise so loud that you would have to raise your voice to talk to people”); extreme temperatures (high or low); smoke, fumes, powder, dust, or vapors (including tobacco smoke); or chemical products or infectious materials one-quarter of the time or more at work. The next–most-common exposures for men are noise (39 percent); breathing in smoke, fumes, powder, dust, or vapors (17 percent); and vibrations (9 percent). Overall, results show that an important fraction of Americans report exposure to unpleasant and potentially hazardous working conditions.

The Pressures of Work

The survey found that:

According to the survey:

The survey found that:

At the same time, it is also true that:

While the workplace is a source of hostile social experiences for an important fraction of American workers, it is a source of supportive social experiences for many others. More than one-half of American workers agreed with the statement “I have very good friends at work,” with women more likely to report having very good friends at work than men (61 and 53 percent, respectively).

In sum, the survey’s results make clear that work in the United States is physically and emotionally demanding and dangerous for many workers. And with the government weakening many of the labor and employment regulations designed to protect worker rights and safety, it is likely that workplace conditions will worsen.

Worker organizing and workplace struggles for change need to be encouraged and supported. A recent Pew Research Center survey showed growing support for unions, especially among younger workers.  It is not hard to understand why.