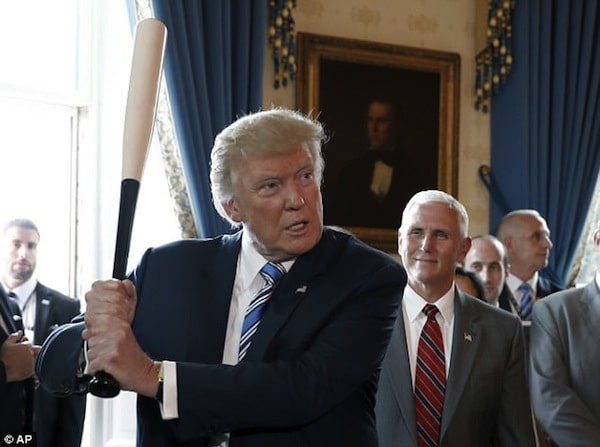 President Donald Trump prepares to swing a Marucci bat, from Baton Rouge, Louisiana, with Vice President Mike Pence, seen right, during a Made in America, product showcase featuring items created in each of the US 50 states, on Monday Read more: http://www.dailymail.co.uk/news/article-4705520/Trump-threatens-strong-swift-sanctions-against-Venezuela.html#ixzz4quvupiy6 Follow us: @MailOnline on Twitter | DailyMail on Facebook

Five hundred and sixty seven thousand dead children. That was the death toll of international sanctions on Saddam’s Iraq, according to a 1995 study published in The Lancet by researchers from the United Nations Food and Agricultural Organisation. The conclusions of the study were shocking: five years after sanctions had been first implemented, UN humanitarian workers found a once rich, oil producing nation wracked with famine. The sanctions were aimed at pressuring Saddam, though in reality their impact was felt most by the poorest Iraqis. One researcher found that around a third of children under the age of 10 in Baghdad showed signs of stunted growth, while 12 percent were in urgent need of immediate medical attention due to extreme malnutrition.

When the now famous Lancet article hit the press, the world reeled in horror at the sheer weight of the suffering inflicted on innocent Iraqi civilians by sanctions, but the response from Washington was as to be expected. When asked how she could justify the slow, painful deaths of an estimated 567,000 Iraqi children, then US ambassador to the UN Madeleine Albright coldly stated, “The price is worth it.”

Indeed it was for some. Albright went on to be rewarded with the office of Secretary of State, while Saddam’s life ended a decade ago, his feet twitching as he dangled from a noose under the hazy light of a Kadhimiya dawn.

Whether or not the price was worth it is an open question for the people of Iraq, who today live under a failed state, mired in corruption, poverty and endless civil war. Nowadays, Iraq is a synonym for basket case. It’s the poster child for nation building, regime change and American values. Each suicide bomber is as American as apple pie, the corrupt politicians are indistinguishable from Saddam’s cronies, and the wreckage of the country’s infrastructure a constant reminder of mission accomplished.

This brings us to the new Iraq: modern day Venezuela. Again, Washington has an arch-nemesis in sight. The White House is promising to bring democracy and freedom to yet another beleaguered, far away land. Under Obama and now under Trump, we’ve seen round after round of sanctions building up. In fact, this is the fifth round of sanctions since Trump took office.

Until now, the sanctions have been more bark than bite, but it’s clear the Trump administration is now very eager to change this – at least in terms of public perception. Passed by executive order, the White House said the new sanctions ban “dealings in new debt and equity issued by the government of Venezuela and its state oil company [PDVSA]”.

Make no mistake, this has the potential to be a massive blow to Venezuela, which now has well under US$10 billion left in foreign reserves. President Nicolas Maduro’s government is bleeding funds on a daily basis, and probably has around US$17 billion in debts that need to be repaid over the next two years or so. Just under US$4 billion of that will be due over the next three months. Back in the ole’ days, Maduro could have simply turned to Russia or China to make good on Venezuela’s oil-for-loans agreements, but not anymore due to several delays in oil shipments to both countries over the last years.

Mark Weisbrot from the Centre for Economic and Policy Research has suggested Maduro could continue to scrape by on the skin of his nose with more debt restructuring and foreign asset sales. Actually, this has pretty much been Maduro’s strategy so far. Last year, the government staved off the spectre of default by negotiating an eleventh hour bond swap deal with PDVSA creditors. It worked, and it gave Venezuela another year with the lights on.

That lifeline may now be closed.

“Without a doubt restructuring and swaps are no longer possible now,” one anonymous broker told Reuters.

The final nail in the coffin would be another round of sanctions targeting Venezuelan bonds, and there’s already speculation the Trump administration might be considering such a move. As the International Institute of Finance pointed out, “Should such a trading ban be imposed, it would probably be targeted on debt instruments clearly linked to the new financing of Maduro’s government.”

Of course, all may not be as bad as it might initially seem. A general ban on Venezuelan bond trading is unlikely at this point, simply because it would be mostly impossible to enforce.

Another critical detail is that Trump’s executive order includes some rhetorical concessions for humanitarian and commercial purposes.

“These include provisions allowing for a 30-day wind-down period; financing for most commercial trade, including the export and import of petroleum; transactions only involving Citgo; dealings in select existing Venezuelan debts; and the financing for humanitarian goods to Venezuela,” according to the White House.

It’s anyone’s guess how these conditions will play out in reality. The loose wording of the executive order and numerous exceptions amount to loopholes big enough to fly Air Force One through, at least for a while. This is all typical Trump: plenty of smoke, but the fire is small enough to fit in the palm of his tiny little hands. Putting aside the intent of the sanctions, it’s also worth remembering the chaotic Trump regime has proven itself incapable of even routine bureaucratic procedures such as hiring staff, so there’s no telling as to whether his government would be capable of managing hardline sanctions – even if they wanted to. Remember: this is the man who managed to drive his own casino to bankruptcy. So, we’re not exactly dealing with a financial prodigy here.

It’s also unclear how the Maduro administration will respond. For one, Maduro would be wise to steer clear of using Citgo as a crutch, given it’s likely the first state asset that could be in the firing line should his government face more litigation on US soil. The other obvious problem is the fact that any humanitarian aid to Venezuela has to pass through the gauntlet of the government’s nonsensical currency exchange system – the same applies to most foreign trade. Put simply, the Trump administration is going to have a fun time trying to figure out how to in practice allow the flow of private investment when the Venezuelan government officially controls all currency exchanges.

Of course, that’s not to dismiss the significance of Venezuela’s burgeoning currency black market, where the country’s currency, the Bolivar (BsF) is doing terribly. As the White House announced the new sanctions, the black market rate was US$1=BsF17,000. You can expect to pay at least BsF2000 for a beer in Caracas, meaning you need a small brick of 20 BsF100 notes just to buy a cold one.

Comparably, the unofficial exchange rate was closer to US$1=BsF6000 in late May, when the Venezuelan government unveiled its latest round of foreign exchange reforms. Without doubt, the BsF is now irrefutably hitting hyperinflation territory. No official data is available for 2017 inflation, though in June the opposition-controlled National Assembly claimed consumer prices rose 127.8 percent in the first five months of 2017. The sanctions could push the BsF further down, but we’ll have to wait and see.

So to put it all in a nutshell, generally speaking it’s hard to say just how effectual these new sanctions will be, though the message itself is loud and clear: Trump wants to be seen as coming for Venezuela. If over the next few months he makes good on his bluster, things could go downhill very, very quickly. Sure, it’s easy to dismiss these sanctions now, but we’ve seen how similar economic warfare has inflicted a heavy humanitarian price on other targets of US aggression, with Iraq being the prime example.

Just like in Iraq, it’ll be the poorest Venezuelans who will pay the price of sanctions. The rich and powerful Venezuelan elite who rub shoulders with Vice President Mike Pence will continue to enjoy gulping down cocktails and feasting on lobster dinners no matter what happens to everyone else. Between country club escapades and vacations in sunny Miami, they manage to find the time to beg Pence to save them from Maduro, but Venezuela’s poor and downtrodden have other ideas. Instead of day dreaming about how nice it would be to get carpet bombed, Venezuela’s grassroots revolutionaries aren’t just dreaming, but fighting everyday for direct democracy, an end to capitalism and a new communal state. Forget Maduro. Forget the self pitying, self exiled sifrinos who throw rocks at cars by day, and sip their duty free Chivas Regal on the rocks by night.

The real heroes of Venezuela are the urban commune militants fearlessly organising under the shadow of the fascist right, the campesinos demanding land and liberty from the old aristocracy, the environmentalists defending that land from a new wave of desperate extractivism, the grassroots socialists pushing for a revolution within the revolution, the feminists and LGBT activists curb stomping the patriarchy, the Afro-Venezuelans fighting racism and historic oppression, and the Indigenous activists battling for their very lives against ranchers and their paramilitary goons.

Will these revolutionaries be paying much attention to Trump’s sanctions? I doubt it. For now, the threat is too far away, and there’s no telling whether these sanctions will be harshly enforced. Yet it would be a mistake to underestimate Trump, not to mention the hawks circling the White House. If the birds of prey get their way, Venezuela could soon be another Iraq, and the price of sanctions could very well become incalculable.