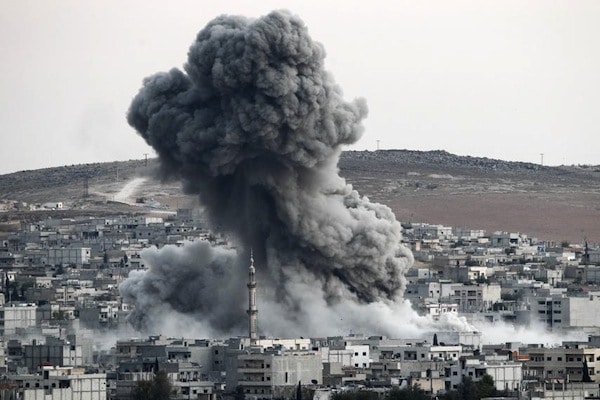 Smoke rises following an airstrike by U.S.-led coalition aircraft in Kobani, Syria, during fighting between Syrian Kurds and ISIS in October 2014. The coalition has bombarded ISIS with 150 airstrikes near Raqqa since Tuesday.

The U.S.-backed onslaught on the ISIS stronghold of Raqqa is claiming hundreds of civilian lives every week, including dozens of women and children. U.S. aircraft and troops on the ground are deploying indiscriminate force on a civilian center where an estimated 25,000 people remained trapped and a further 270,000 have already fled.

According to Airwars, which monitors air strikes by the U.S.-led coalition in Syria and Iraq, 725 civilians have lost their lives in the two-and-a-half months since the Raqqa offensive began in June. The Syrian Observatory for Human Rights, a British-based monitoring group with ties to the anti-Assad opposition, reported that between Aug. 14 and Aug. 22 alone, 168 civilians died in U.S. air strikes and shelling attacks.

The humanitarian situation is so bad that the United Nations appealed yesterday for a pause in military operations to allow civilians to escape. An official in Washington unceremoniously dismissed the UN’s plea, declaring that a pause would give ISIS “more time to build up its defenses and thus put more civilians in harm’s way” and “reinforce [its] tactics of using civilians as human shields.”

U.S. imperialism is determined to consolidate its geostrategic and economic interests in Syria, Iraq and the wider region against its rivals, even if this means laying waste to entire urban centers and slaughtering tens of thousands of innocent civilians. While Washington’s official propaganda claims that the U.S. wants to eliminate Islamic State, the principle reason for the ruthless assault on densely populated cities over the past year has been to ensure that U.S.-backed forces gain control over strategically important regions of eastern Syria and western Iraq before pro-Assad fighters, backed by Russian air power and Iranian soldiers, do so.

An Amnesty International report released Thursday revealed that U.S. ground troops, supposedly deployed to act as “advisers” to the Kurdish-dominated Syrian Democratic Forces, are indiscriminately firing unguided shells into Raqqa. One incident documented by the group saw twelve shells strike a residential building, causing the deaths of twelve civilians, one of which was a baby. “Whether you live or die depends on luck because you don’t know where the next shell will strike,” a resident told Amnesty.

Amnesty Senior Crisis Response Adviser Donatella Rovera said that the U.S.-backed assault was helping create a “deadly labyrinth” for civilians in the city, who were coming under fire from all sides. It also accused the Assad government of bombing villages to the south of Raqqa.

Reports suggest that around 60 percent of Raqqa has been recaptured by the SDF, which is led by the U.S.-armed Kurdish People’s Protection Units (YPG). But even in areas allegedly under the militia’s control, ISIS fighters have been able to mount counterattacks.

The horrific slaughter of civilians in Raqqa comes just months after U.S.-backed Iraqi forces, relying on U.S. air power, laid waste to vast swathes of the city of Mosul in northern Iraq. U.S. warplanes repeatedly used overwhelming force on residential areas, frequently resorting to the dropping of non-precision-guided munitions against ISIS snipers. Some estimates place the number of deaths in the city as high as 40,000, and there have been widespread reports of systematic human rights abuses by Iraqi forces, including summary executions.

These vicious crimes against the long-suffering population of Syria and Iraq are war crimes and blatant violations of international law, which prohibits the targeting of civilians and the use of indiscriminate attacks in urban areas. They implicate not only the top officials in the Trump administration, including the president himself who has boasted about removing any restrictions on the use of military force, but also the government of Barack Obama, who became the first two-term president to wage war throughout his term in office, and launched the Mosul offensive.

The imminent prospect of ISIS being forced from its last major urban stronghold will not lead to a decrease but rather an increase in U.S. military involvement in Syria. U.S. and British special forces have been training Syrian Islamist rebels in the southeast of the country with the aim of using these proxies to take ISIS territory further north, rather than allowing it to fall into the hands of Assad’s troops. The eastern border region is of considerable strategic significance, since it would enable Iran to establish a land bridge from Teheran to Damascus and its Hizbollah ally in Lebanon. The Trump administration, which has demonized Iran as the chief sponsor of terrorism in the region, views such a prospect as intolerable.

An indication of the discussions well under way within U.S. ruling circles is provided by an article entitled “Does Trump intend to thwart Iran’s ambitions in Syria?” published Thursday by Foreign Policy, which warned, “The president risks going down in history as the man who defeated the Islamic State only to make the Middle East safe for Iranian hegemony.”

Alleging that Israel, feeling threatened by the establishment of an Iranian corridor to the Mediterranean, the article’s author, John Hannah, who served as Dick Cheney’s National Security Adviser during the Bush administration and is now a senior fellow at the Foundation for Defense of Democracies think tank, proceeded to argue that Trump’s chief goal in Syria should be “preventing a fundamental shift in the balance of power in favor of America’s most determined enemies in a region of the world long deemed vital to U.S. interests.”

The unrestrained use of Washington’s military will not be restricted to Iraq and Syria. On Monday, President Donald Trump spoke to an audience of soldiers in military uniform and boasted that full decision-making powers would be given to military commanders to determine when to use overwhelming force to “obliterate” enemies in Afghanistan. Tens of thousands more civilian casualties are inevitable in the impoverished Central Asian country, where hundreds of thousands have already lost their lives in the brutal, 16-year-old neocolonial war of occupation led by the United States.

Trump and Defense Secretary James Mattis have used no less inflammatory language in their bellicose threats against North Korea. After Trump warned that Pyongyang would face “fire and fury” from the U.S., Mattis left no doubt about the scale of the onslaught being prepared against Pyongyang when he proclaimed that a war with North Korea would lead to the “destruction of its people.”

The eruption of U.S. imperialist violence in ever more bloody forms is a devastating indictment of all of those political forces which have sought over the past quarter century to portray Washington as the defender of “human rights” and “democracy.” The Democrats, led by the “liberals” at the New York Times, provided the necessary propaganda to justify the war in Iraq in 2003, the bombardment of Libya to bring about regime change in 2011 under the pretext of the bogus “responsibility to protect,” and the arming of Islamist rebels in Syria in the name of supporting a so-called “democratic” opposition. They were supported by numerous pseudo-left groups who went so far as to portray events in Syria as a “revolution” and appealed to the U.S. and its European imperialist allies to intervene more decisively on the side of the “rebels.”

Last year, the corporate media issued incessant denunciations of Russia and the Assad regime for war crimes and violations of international law during their assault to drive U.S.-armed Islamist Jihadis out of eastern Aleppo. The hundreds of civilians killed or maimed in the joint Russian and Syrian offensive pale in comparison to the tens of thousands massacred by U.S.-led operations so far this year, not to mention the millions who have been killed as a result of the uninterrupted U.S. wars of aggression over the past twenty-five years throughout the Middle East.

Precisely because of this fact, the major media outlets have deliberately sought to bury coverage of the latest events, giving as much space to the absurd denials of responsibility from the U.S. military as they do to the damning findings of the reports from Airwars and Amnesty.

These findings have not stopped Thomas Friedman, a columnist at the Times who has propagandized for every U.S.-led war of aggression since the 1990s, from continuing to glorify America’s military prowess. In a recent column entitled “From Kabul to Baghdad,” Friedman enthused over his visit to the U.S. joint strike center in Irbil in northern Iraq, from where many of the rockets and missiles that have killed civilians have been fired. He witnessed U.S. forces fire a 500-pound bomb at a building where ISIS snipers were based, and could barely contain his enthusiasm. “The screen rebroadcasting the F-15E’s targeting pod showed the bomb going straight down through the roof,” wrote Friedman, as if he was describing a video game.

“‘We have splash,’ said one of the controllers in a monotone as a huge plume of smoke engulfed the video screen.” All that was left of the target, Friedman continued, was a pile of “smoldering rubble,” a result that has clearly been produced many hundreds of times in the U.S.’s brutal air war.

Over recent months, the Democrats have spearheaded a vicious anti-Russia campaign that has sought to pressure the Trump White House to maintain Washington’s bellicose stance towards Moscow.

The anti-Russia campaign has simultaneously portrayed the military, including Mattis, Chief of Staff John Kelly and National Security Adviser H.R. McMaster, all of whom are implicated in the war crimes of U.S. imperialism around the world, as “moderates” and the “adults in the room” capable of restraining Trump.

The bloodbath being inflicted on Iraq and Syria, and the imminent threat of its expansion into Afghanistan, show how fraudulent such claims are.