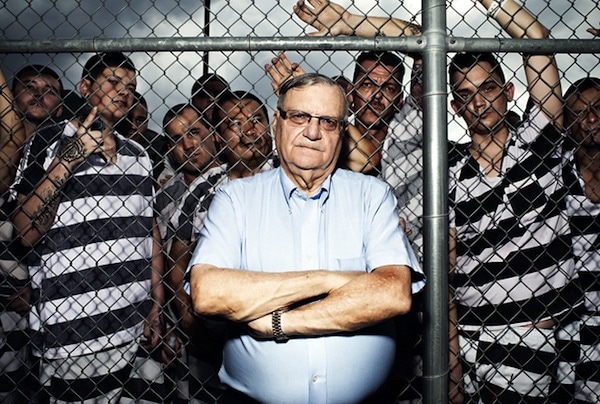 Even most leftish white Americans like to think that their country is good and its institutions are fair and equitable. According to this wishful thinking human rights abuses only happen in faraway places and injustices here are resolved by reining in a few bad apples. The facts say otherwise and prove that the United States is consistently one of the worst human rights violators in the world. The cruelty of its prison system extends far beyond headlines of a few well known villains like David Clarke and Joe Arpaio.

Donald Trump’s pardon of former Arizona sheriff Joe Arpaio is quite rightly a big news story. Trump’s pardon is easily denounced as an obvious violation of the spirit of the presidential pardon process. It was a sham used to circumvent an established process. Arpaio had not even been sentenced for his misdemeanor contempt of court conviction. Full pardons are rare in any case, with examples such as Chelsea Manning’s being far more common. She received a commutation and only after serving seven years of her sentence.

Arpaio is surely deserving of scorn heaped upon him. He referred to his jails as “concentration camps.” He held prisoners outdoors in tents, a violation of national and international law. Arpaio was convicted
of contempt of court because he continued to detain undocumented people without charge in violation of a judge’s order.

Arpaio referred to his jails as ‘concentration camps’

He used intimidation and charged anyone who opposed him with crimes and even faked an assassination attempt which sent an innocent man to jail for four years. Not only were female prisoners shackled while giving birth but he didn’t bother to investigate hundreds of sexual assault cases. The judgments against him cost Maricopa County in Arizona millions of dollars.

But Arpaio differs from the rest of law enforcement only in the openness of his methods. Joe Arpaio was a media whore and relished the attention given to him by Fox news and other right wing outlets. He became a fixture among the people who elected Donald Trump and openly bragged about his untouchability.

It must be pointed out that the United States is full of Arpaios in all 50 states. Two judges in Pennsylvania literally made a fortune sending juveniles to jail. Women in New York state prisons are still shackled while giving birth, in direct violation of that state’s law.

No one knows for certain how many people died in Arpaio’s custody. But there are horrific stories of death in prison all over the country. Prisoners have died of thirst, or from treatable illnesses when denied medication. Some of these cases are brought to light but thousands of others go unreported. In the state of Texas alone, 6,900 prisoners died in custody over a ten year period.

The United States is full of Arpaios in all 50 states

Trump and Arpaio are inviting targets. Both men dispense with niceties and show the system in its barbaric glory. There is no attempt to mince words, beat around bushes or put a happy face on wrong doing. They are forthright in advocating their racism while the prison industrial complex grinds on, destroying lives and sometimes ending them.

Arpaio and Trump show the dangers of allowing open racism to flourish. The Trump presidency emboldens white supremacy but in an ironic way minimizes it too. Mass incarceration is diminished by attention paid to the Trumps and Arpaios in this country. Because of the endless desire to cover up the country’s crimes, the focus falls on the most blatant evils. All the while the system goes on committing an unknown number of human rights abuses in jails and prisons across the country.

The system is built to incarcerate for the sake of incarcerating, and people of color are the primary victims. Their victimizers may not look for publicity like Arpaio did, but their actions as nameless bureaucrats are equally deadly.

It is a grave mistake to reserve outrage and protest for the Trumps and the Arpaios of the world. Doing so allows the other killers to act with impunity. That is why the carceral system must be torn out root and branch. Prison abolition should be the watch words and mealy mouthed talk of reform must be dismissed.

The United States would still have more than 2 million incarcerated persons if Joe Arpaio didn’t exist or if Donald Trump weren’t president. It should not be forgotten that a Democratic president, Bill Clinton, did more to expand mass incarceration than any other. But his successors did nothing to end it either.

The worst criminals are outside of the prison walls. Some of them are well known like Trump and Arpaio but most are faceless as they carry out horrific abuses. The focus of our attention must be on ending the system that allows them all to flourish.