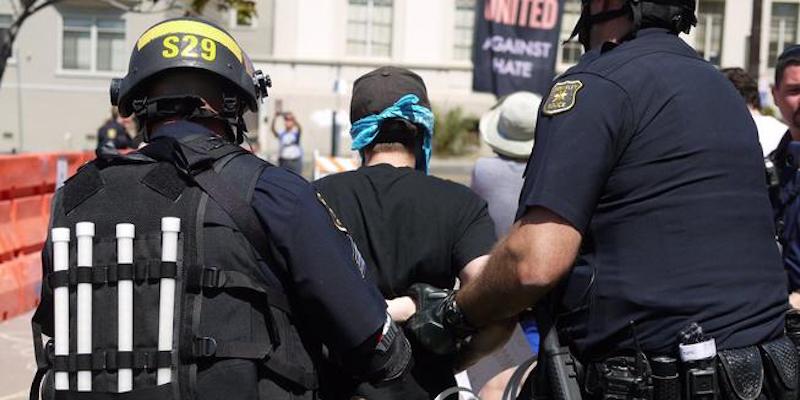 Activist being handcuffed in Berkley antifa protests in August 2017.

With all of the criticism coming from liberal and centrist media (as well as the usual suspects on the right), one would think that a commitment to opposing fascism is some kind of social harm. It’s a cruel irony given the reverence justly paid in American civic ideology to those who were murdered by and those who miraculously survived Nazi genocide. Yet we really do not seem to have learned much: in less than a month—the time between the rally in Charlottesville and the weekend of the failed white supremacist demonstrations in the Bay Area—anti-fascists (antifa) enjoyed a moment of heroism before public opinion, as broadly represented by the media class, turned: per the Washington Post, antifa, an overarching description of broad coalitions historically created to resist European fascism in the early 20th century, is “the moral equivalent of neo-Nazis.” In a total collapse of political ethics, the very anti-fascist groups and individuals protecting communities from white nationalist violence (and contributing to Hurricane Harvey relief efforts) are equated with the forces attempting to actualize an exterminatory race war fantasy.

These deliberately antagonistic and left-baiting narratives are not only inaccurate in themselves, but they set and drive both popular and political discourses. One idea about anti-fascists and the black bloc propagated as a means of discrediting their ideology and praxis is that both overwhelmingly consist of privileged white people with little to do but cause property damage: the meme of the “outside agitator ” is a favored descriptor despite its origins in racist discourses where politicians infantilizingly sought to warn and shelter Black communities from white organizers seeking to create interracial coalitions. This presumption, however, induces a kind of cognitive dissonance when liberal commentators and journalists urge politicians to take prototypically anti-black carceral action against “gangs of those black-masked leftist thugs,” as The Chicago Tribune’s John Kass graciously described them. While ostensibly disavowing white nationalist assembly and politics, the cacophony of antifa condemnation is not simply a knee-jerk response to the spectacle of the confrontational bloc. The repetition of words like “thug” and “gang” suggests the degree to which mainstream journalists, and centrists more widely, understand challenges to the state in the same euphemisms with which they express their own deep anti-blackness.

In the mouths of white journalists, “thug” is never anything but an invitation of state repression by any means necessary; the difference between media responses to Charlottesville compared to Berkeley is the difference between perceptions of a more purely defensive stance and a more confrontational one, particularly given that Heather Heyer’s murder in Charlottesville retroactively framed the need for community defense as more urgent and legitimate. Where the Charlottesville counter-demonstrators were seen to be standing in solidarity with and in defense of community (particularly after comments made by older religious leaders and community supporters like Cornel West) by attempting to expel the white nationalists converging on the town, the black bloc in Berkeley was characterized as “violent” despite making a demand of the state to de-escalate—to “put the gun down!”; a demand to which the state actually capitulated, giving us the tiniest glimpse of collective community power and self-defense in practice. But that moment in Berkeley, and subsequent moments where non-bloc counter-protestors and members of the black bloc alike chased attendant members of the far right out of these spaces (even using force as it was deemed necessary), shifted this understanding of antifa’s existence from a solely defensive entity with a singular politic of protection to an active challenge to the state’s monopoly on legitimate uses of force.

Anti-fascists displaced the Berkeley Police Department in their role as community protectors (despite the claims made in media accounts of the day), a role the police abrogated following that brief but tense standoff. The potential significance of that power unquestionably represents something fearful to people who endorse the state’s sole capacity to act as the arbiter of justice. There is a reason that Dr. King, whose words are constantly weaponized by centrists to discredit anti-fascist (and specifically forceful Black liberatory) action, referred to the “white moderate who is more devoted to ‘order’ than to ‘justice’” as “the Negro’s great stumbling block in his stride toward freedom” as he addressed the world from Birmingham City Jail in 1963. Any media that is understood to be legitimate in the United States defaults to protecting the state’s monopoly on violence and its mechanisms even when it, despite the freedoms afforded by our beloved First Amendment, brutalizes and silences dissent. It is no mistake that liberal and so-called “progressive” politicians, such as Nancy Pelosi and Berkeley Mayor Jesse Arreguin, have tended to respond to militant anti-fascism with the racializing languages of containment and punishment inherent to the carceral state. There is nothing surprising about Mayor Arreguin’s suggestion that the state “should classify [antifa] as a gang” while many city and state law enforcement officials in California, even while describing the murder of Heather Heyer as an act of domestic terrorism, refuse to classify hate groups as gangs or domestic terrorists (despite fitting the state’s definitions) because “law enforcement officials are wary of being perceived as investigating any person or group for political views.” Black and Brown communities are overwhelmingly targeted and criminalized by anti-gang measures, and these injunctions, along with the emergency ordinance passed by Berkeley City Council, lay the foundation for a liberal “solution”, compatible with fascism, to the anti-fascist “threat” posed by opposition to white supremacists.

The politico-media industrial complex functions so that the media acts as something like a fourth branch of government in a kind of dialogical relationship with the state where it both informs and is influenced by dominant rhetorics. For all of the equations of the so-called “alt-left” and the alt-right, the media fails to provide the same opportunities for left political organizations to define themselves and articulate their aims, while continuing to feign ignorance about the origins and goals of violent white supremacist politics. Comments like Robert “Azzmador” Ray’s about Charlottesville—saying he wanted to reclaim his city because “[the] city is run by Jewish Communists and criminal niggers” (to which right-wing podcaster Christopher Cantwell replied: “We’ll fucking kill these people if we have to”)—receive less media scrutiny than the actions of community members and groups assembling to counter these explicitly articulated politics. In rhetoric mirroring COINTELPRO, “antifa” comes to constitute “domestic terror violence” per federal law enforcement, not unlike J. Edgar Hoover’s declaration of “violence-prone black extremist” Black Panther Party as ” the greatest threat to the internal security of the country.” All the handwringing about antifa sounds much like the mid-20th century media castigating the tactics of Dr. King’s civil disobedience and the Civil Rights Movement writ large for inviting violence and alienating to the Black cause, and not unlike the present maligning of the Black Lives Matter movement.

Despite the presumptions of the overwhelming whiteness of antifa, “terrorism” and “terroristic threats to national security” in the United States can only ever be negotiated and understood through violence against non-whiteness: this is the logic compelling the Trump administration to reroute funding for counter-terror programming to focus exclusively on Islamist violence, despite active white supremacist terrorists communicating about and plotting hate crimes across the internet, radicalizing new generations of white supremacists in these online spaces. The Southern Poverty Law Center asserted in a 2014 report that in the previous five years, registered members of the now defunct Stormfront website alone were responsible for nearly 100 murders. The political violence of the far right poses little threat to the American settler state because it ultimately helps to uphold that state’s continued existence and oppressive function. The fascistic violence of white nationalism poses little threat to the United States’ monopoly on violence because far-right terrorism ultimately poses no threat to racial capitalism and interlocking white supremacist structures stemming therefrom.

Spanish anti-fascist Buenaventura Durruti prophesied years ago that “no government in the world fights fascism to the death. When the bourgeoisie sees power slipping from its grasp, it has recourse to fascism to maintain itself.” The clearly defined liberal preference for order over justice will facilitate fascistic governance and punish the “violent” left, thus necessarily strengthening existing punishments of non-white communities, and maintain a tenuous peace for state-mediated hegemonic whiteness. A growing anti-fascist movement in this country represents the refusal by a portion of the American people of the repression of rights, liberties, and community safety in the name of “security.” And if that makes us domestic terrorists in the process, then so be it.