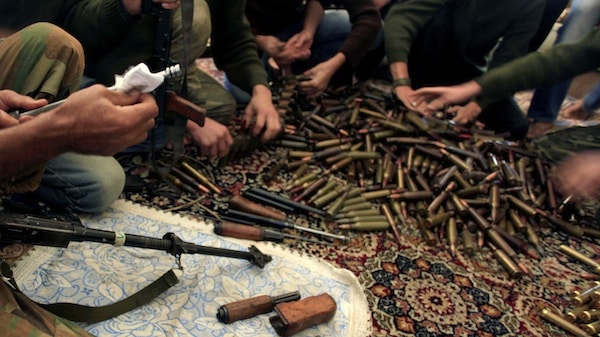 FILE – In this Wednesday, Nov. 14, 2012 file photo, Free Syrian Army fighters clean their weapons and check ammunition at their base on the outskirts of Aleppo, Syria. President Barack Obama said early on in the 2 1/2-year-old conflict that Assad lost the right to lead because of the brutal oppression of his people, most chillingly displayed in what Washington contends was an Aug. 21 chemical weapons attack on rebel-held areas that killed hundreds of civilians. But it’s not clear who would replace Assad if he were to be driven from power, either as a result of U.S. punitive strikes for the suspected poison gas attacks or in eventual political transition talks with the Western-backed opposition. (AP Photo/ Khalil Hamra, File)

On July 19, the Trump administration announced that it would end the CIA’s covert program aimed at arming and training terrorist-linked “moderate rebels” in Syria, sparking hope among some Trump supporters that he was finally enacting the anti-interventionist rhetoric of his campaign.

However, a recently released report shows that the Pentagon has picked up the slack left by the end of the CIA’s program — pumping billions of dollars worth of weapons into the hands of Syrian “rebels,” while attempting to mask the paper trail and their suppliers’ ties to organized crime.

The report, published Tuesday by the Organized Crime and Corruption Reporting Project (OCCRP) and the Balkan Investigative Reporting Network (BIRN), provides conclusive evidence that the Pentagon plans to provide up to $2.2 billion in weapons to Syrian “rebel” groups, particularly Kurdish militant groups like the Syrian Democratic Forces (SDF). While the Pentagon has been arming “rebels” since 2015, the Department of Defense began requesting increased funding for the program once the CIA covert arms program was ostensibly slated to shut down.

The Pentagon has requested an additional $322.5 million for the financial year ending October 2017 and $261.9 million for the following 12 months. For fiscal years 2017 and 2018, the budget for the program has been set at $584 million while another $900 million has been earmarked to continue the program through 2022. 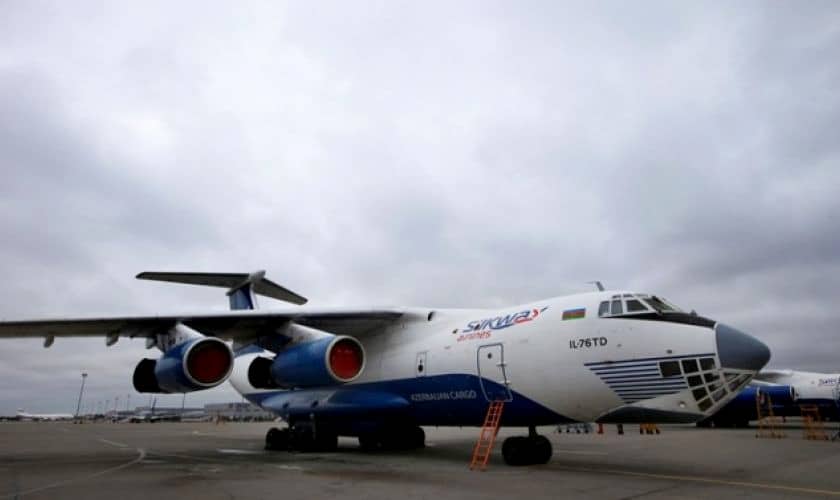 Weapons were shipped from Eastern-Europe via Silk Way airlines, who offered security-free diplomatic flights to clients ranging from Saudi Arabia, Israel to US Central Command.

The program utilizes the Pentagon’s so-called “Balkan arms pipeline,” a network first exposed by Bulgarian journalist Dilyana Gaytandzhieva. The arms-supply chain involves the U.S. purchasing vast amounts of Soviet-Era weaponry from Eastern Europe, from which it is then shipped to air bases in Turkey and Kuwait, via the Azerbaijan commercial airline Silk Way, and later sent into Syria. The BIRN/OCCRP report adds, notably, that several of the Pentagon’s weapons suppliers in these countries share links to organized crime organizations and other unsavory actors.

A Bulgarian reporter fired for telling the truth about weapons supplies for #terrorists in #Syria on diplomatic flights… https://t.co/UFLE935MZ3

In addition, the report details how this Pentagon program to arm “rebels” has essentially sidestepped long-established checks on international weapons trafficking that are intended to curb illicit deals. Many of these safety checks are included in the UN’s Arms Trade Treaty, which the U.S. has yet to ratify but ostensibly supports.

Patrick Wilcken, an arms researcher at Amnesty International, told BIRN that the Pentagon’s actions are undermining the treaty in its entirety. 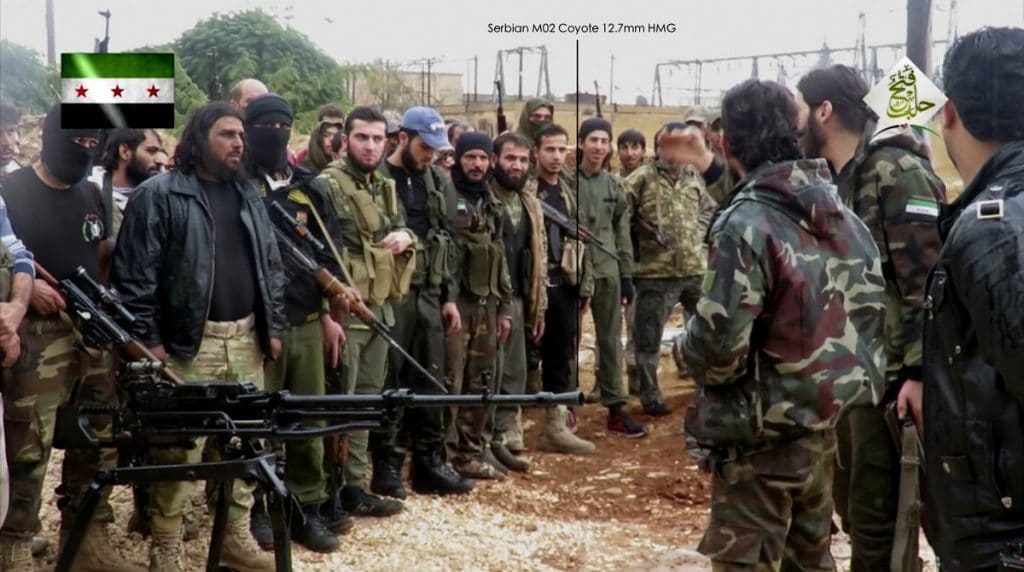 Syrian militants are seen with a Serbian made MO2 Coyote machine gun, a weapon which was shipped to Syria via Saudi Arabia and Turkey on diplomatic flights a few months earlier.

The specific “sidesteps” the Pentagon has been taking involve the alleged removal of documentation regarding who or what groups ultimately receive the purchased weapons. By removing this documentation, the Pentagon enables weapon transfers to any armed group within Syria it chooses – including Syrian rebels – without providing documentation as to who received what.

“The Pentagon is removing any evidence in their procurement records that weapons are actually going to the Syrian opposition,” Ivan Angelovski, who co-wrote the report, told Foreign Policy. Indeed, when the report authors contacted authorities in Romania, Bulgaria, and other nations involved in the program, several of the governments responded that they had granted export licenses for the weapons where the U.S., not Syria, was listed as the final destination. They claimed to have been unaware that the weapons were destined for Syria.

Thus, the Pentagon’s alteration of documentation is, in fact, illegal, given the U.S.’ membership in the Organization for Security and Cooperation in Europe, which requires that end-user certificates include the final destination country. 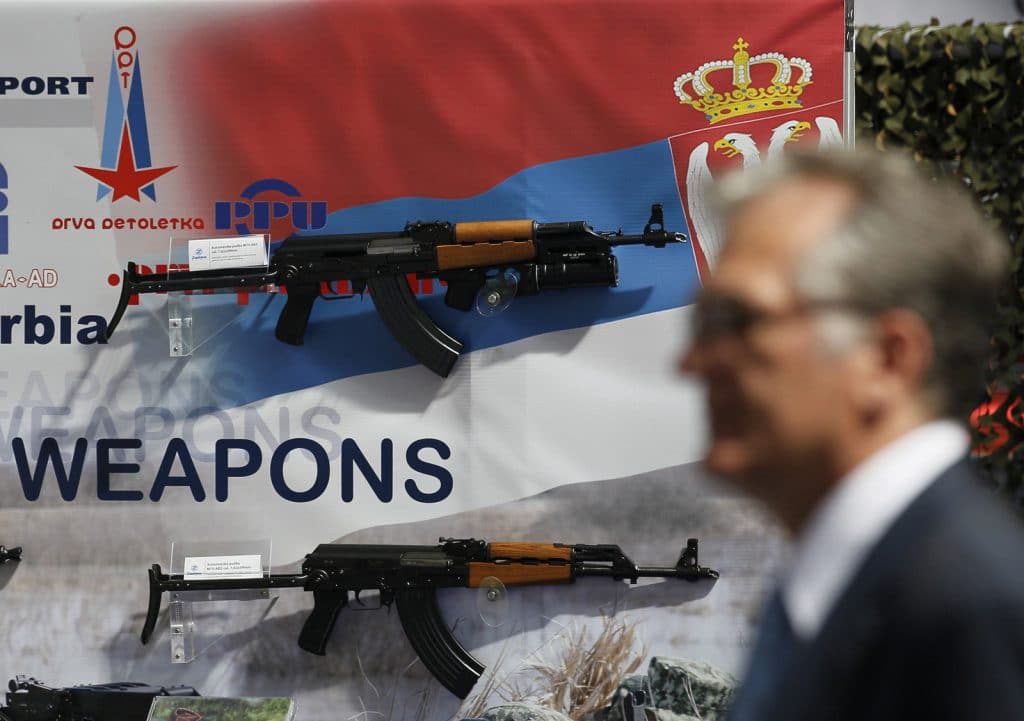 A visitor looks at assault rifles made by the Serbian company Zastava Arms, during a defense fair, in Belgrade, Serbia. (AP/Darko Vojinovic)

Furthermore, the report notes that the arms transfers are so massive that they are fundamentally altering the economies of the Eastern European nations that are supplying the weapons. The report notes that factories in Serbia and Bulgaria have been drastically increasing arms and ammunition production in order to keep up with demand. In order to meet the increasing demand to be generated by the program over the next several years, Serbian Prime Minister Aleksandar Vucic promised in July to turn “meadows and forests” into arms factories and almost double Serbia’s arms exports to $750 million by 2020.

Increased production alone has proven insufficient, however, with the Pentagon being forced to lower its standards for weapons and ammunitions to meet demand, while also forcing the U.S. to procure even more arms from “non-traditional” countries like Pakistan, Afghanistan, and Vietnam.

While the U.S. has ostensibly accepted that Syria’s government will remain in power and even reclaim most, if not all, of its territory, it seems the Pentagon – along with its regional ally, Israel – are unwilling to let the billions already spent on arming the Syrian “rebels” go for naught, spending billions more in hopes that the situation will finally favor their long-standing goal of regime change.