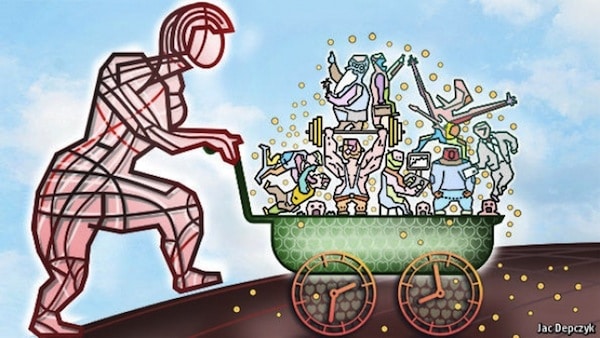 As an Economics major, I have gotten dangerously accustomed to hearing phrases like:

Government intervention will hinder technological progress; the reallocation of resources from the more productive to the less productive impedes total productive activity.

We need to stop protecting people, we need to protect jobs instead

In themselves, the two statements above make for good arguments. If more resources are provided to the less productive, the economy will undergo a decline in productivity which means a decline in economic growth, which sounds bad, right?

If workers keep agitating by demanding reasonable wages and the right to work with dignity, it is likely that profit maximizing firms will be discouraged to continue investment and will relocate to areas where they can find cheaper labor. Hence jobs > people, also less jobs = less productive activity = decline in economic growth, which again doesn’t sound too good on paper.

However, an analytical look at the statements above will reveal how they take root in a masculine, neoliberal imagination that erases the lived experience of the marginalized along with the socio-historical landscapes we inhabit. Who are the ‘less productive’? Where does the single-minded pursuit of jobs take us, where questions concerning the ability to lead a reasonable existence are taken away by pushing workers into a vicious poverty trap? These questions become secondary in the cost-benefit analysis employed within the average economics classroom.

Mainstream or neoclassical economics bases itself upon a number of problematic assumptions. The dominant principle being the construction of the rational economic man: an autonomous, self-centered individual that interacts with others contractually to maximize his own self-interest. The rational economic man exists in an ahistorical and identity blind space. He does not find himself entrenched within social structure. This creature exists outside of history and society.

The celebration of rational choice is central to the positioning of neoclassical arguments: we all make a choice to pursue a particular activity for it is better than our opportunity cost. The autonomous choice maker does not find that his decisions are controlled by consideration of hierarchical structures and categories of identity like class, caste, gender, ethnicity, race, and religion, for they simply don’t exist in this parallel universe! The buyer and the seller are treated as equal participants within the space of a market who are voluntarily entering into an act of exchange. Since both participants are mutually benefiting from this activity, no one can be said to be exploited (on paper!).

The mainstream economist’s primary points of analysis are rational choice, competition, efficiency, and cost-benefit analysis. These categories are riddled with masculine value. Furthermore, emphasis is laid out on the pursuit of economic growth, an increase in the total productive activity of the economy within a certain time frame. Perhaps, the greatest irony is that on attempting to step outside of such ‘practical’ cost-benefit analysis, one risks being labelled utopian and unreasonable. A short history of the study of economic growth allows one to comprehend how this goal is incompatible with the pursuit of social justice.

In the 50s, it was dominantly argued that the ‘fair’ distribution of income arrived at through patterns of exchange within a ‘free market’ (absence of government intervention) will eventually trickle down from the rich to the poor in the form of “investment” spending. Yet historically, it has been observed that wealth gets concentrated in the hands of a few in the form of ‘savings’. The infamous Trickle-Down Theory has been proven to be a mere inaccurate, yet compelling description. A recent Oxfam report titled ‘An Economy for the 99%’ found that 8 men currently own half the world’s wealth.

In 2008, the World Bank emphasised on the notion of inclusive, pro-poor growth raising concerns about an incremental distribution of growth. It could no longer be held that all growth would reduce poverty. The pace of time was stressed upon as the rate of increase in income of the poor, as a proportion of the population became a matter of grave concern.

In a crucial and significant intervention, the Asian Development Bank highlighted how ‘poor’ itself cannot be understood as a homogenous category as there are social, religious, ethnic, and gendered factors that restrict equal access to resources. Yes, identity and history do exist! It was argued that the elasticity (responsiveness) of poverty with respect to growth must be used to measure the “pro-poorness” of growth.

IT’S HIGH TIME THAT WE REPLACE THE NARROW RATIONAL ECONOMIC MAN WITH A MORE OBJECTIVE UNDERSTANDING OF HUMAN NATURE.

While in 1990, Low Income Countries accounted for 93% of the world’s poorest population, currently Middle Income Countries account for 70% of global poverty. There has been an increase in growth and income, yet this has growth has done little, if not worsened the condition of the poor for there has been no vertical mobility, people have moved horizontally from agriculture to construction.

Mainstream economics is divorced from ethical concerns as equal distribution of capital, and education is seen as a move that is instrumental to pursuing growth. There is little concern to eradicate inequality for the reason that inequality is unacceptable in itself.

And so, as a feminist in an economics classroom, I begin to wonder: why do we frantically focus on pursuing growth? Feminism lets me place the question of social justice at the heart of analysis; I no longer see the theoretical as separate from the ethical. Mainstream economics ought to be read as a language that is abused to legitimise and erase structural violence.

Feminist economics concerns itself with the pursuit of a “people-centered” development where the market is an institution that is subordinate to the goals of true democracy. Theoretical work must aid the construction of an egalitarian economic system where human well-being and social provisioning take on the role of primary concerns. Feminist economists undertake a variety of questions and positions, what undercuts their work is a certain ethical stance and deep skepticism towards the arguments that privilege hierarchy.

Feminism is the radical notion that women are people. It’s high time that we replace the narrow rational economic man within our models with a more objective understanding of human nature by incorporating the ‘feminine’ characteristics of humanism, connectedness, and intuition. Maybe, that way, people will begin to exist within economic models too.