First the good news, if very belatedly. In a summer session the Bundestag (the old one, since replaced by elections) finally legalized same-sex marriage. Partnerships, already possible, were given equality as regular marriages, thus permitting the adoption of children. An estimated 80 percent of the population favored the decision, but not nearly so many delegates of Merkel’s Christian Democratic Union (CDU) or Bavarian sister party Christian Social Union. She loosened party discipline, however, telling her parties’ delegates to vote their conscience. Seventy did and joined all other parties to vote “Yea”. But not Merkel; she voted “Nay”. The final vote: 393 Yea, 226 Nay, four abstentions.

A second good item, at least for Berliners and visitors. The State Opera House on Unter den Linden boulevard, Berlin’s most beautiful building for me, built in 1743 for King Frederick II (“the Great”), burnt down a century later, wrecked twice by bombs two centuries later and reconstructed by the GDR, is finally re-opening after seven years of repairs and renovations. Opera means more here than in the USA, also for many “middle-class” people, who can now rejoice with Daniel Barenboim, its Argentinian musical director, conductor and pianist (also with Spanish, Israeli and Palestinian citizenship!). As for ticket prices: don’t ask! And how many millions it cost over the original estimate? Again, don’t ask! It was out-matched only by Berlin’s new airport, planned to open ceremoniously in 2011, now scheduled for 2019, or possibly 2020, who knows, nor how many made fortunes in the process, which cost the political crash of one Berlin mayor—hopefully no omen! Berlin is still quarreling on whether to keep or scrap its older Tegel airport.

That leads to politics, no easy matter for outsiders (or insiders). In Lower Saxony, a state of western Germany, one Green delegate switched to the Christian Democrats (CDU) last summer (she was bribed, it was insinuated). The one-seat majority of the Social Democrat-Green coalition was gone; its collapse made special state elections necessary, only three weeks after the all-German elections.

It looked like a shoo-in for the CDU. The Social Democrats (SPD) with their new boss Martin Schulz, had been losing ground even faster than Merkel’s party in every state and national election and were way behind. But to widespread surprise, the Social Democrats sprinted to a 3.3% lead, won and rejoiced.

But the hot race cost their buddies, the Greens, a full 5%, making the duo too weak to rebuild the old coalition—again by one seat. The big-biz Free Democrats refused to join them to form a trio. To make matters worse, the extreme-right Alternative for Germany (AfD), although far weaker than they hoped, got seats for the first time in that state. But alas, the LINKE (Left), while gaining 1.5% over its vote four years ago, failed to master the 5% hurdle, and with only 4.6% was left out in the cold. The stalemate in Hannover, the state capital, makes Lower Saxony’s future look very hazy!

So is the future of the federal government, with a similar problem. Here the SPD was battered, and lost in the race to the top spot. Refusing to continue playing second fiddle to Angela Merkel for four more years, it bowed out. The end of that duet, and with no other party successful enough to become a new partner (and the AfD ruled out of the game), it was clear; it would take not two but three to tango.

The hopes of some for a trio with SPD, Green and an obediently-tamed LINKE–“red-green-red”—simply didn’t add up to the needed majority of 355 seats.

Parties here have no animal ties, like donkeys or elephants, but only colors. The SPD still claims red, yellow belongs to the Free Democrats: with the Greens that combination would be a “Traffic Light Coalition”—but even then a majority was lacking. Since the “Christian” CDU-CSU union is connected with the clerical color black, the only remaining possibility seems to be a “Jamaica coalition”. The connection with that island-nation is only the color of its flag, also black, green and yellow. But the Free Democrats insist they will not join up with the Greens: they seem to recall the years, long past, when that party was really almost leftist. Today, despite occasional echoes of that past at the green grass roots level, it has largely moved toward a uniform-shaded olive green, with many of its leaders less interested in German living standards than in picking risky quarrels with Russia. In general, jealousy, opportunism and strategic zigzags are making the road ahead in German political line-ups very hazy –with or without traffic lights or inspiration from the island in the Gulf of Mexico.

This wheeling and dealing distracts from a major menace. For the first time, far right members of the Alternative for Germany (AfD) will be sitting in the Bundestag, ninety-four strong. With about one-third one might suspect a swastika tattoo under the tailored new suits, and by all of them a sharply nationalist piercing pin. Some have called Berlin’s memorial to the Holocaust victims “a monument of shame” for Germany—not the Holocaust but the monument! Another defended the great unblemished role of the German Wehrmacht in World War II. The party’s leader, attacking the official responsible for immigrant integration, who has a Turkish name but was born in Hamburg, warned with typical Nazi vocabulary that she will soon be “disposed of to (Turkish) Anatolia, thank God”! Some AfD supporters have shown a willingness to get physically rough, while many police officers have somehow been far slower to step in against them than to arrest leftwing demonstrators. TV channels, and now even a Lutheran bishop in their stronghold in Saxony (not Lower Saxony!), are ready to treat AfD politicians as “normal members” of the political scene. Is it only a question of time before more politicians show willingness to accept them? The LINKE at least is persistent in saying “No! Fascism is not a viewpoint, it’s a crime!” The AfD, they maintain, must be avoided and isolated, like any with dangerous contagions.

On Sunday the ominous clouds moved closer. The Freedom Party of Austria, a blood relative of Germany’s AfD and all far-right parties in Europe, moved into a strong third place (26%) and will most likely form a coalition with the winner, the center-right People’s Party, which got a greatly improved 31.6%. The resulting government, based on a truly vicious propaganda campaign against refugees, will push the second place Social Democrats out of the chancellor job and the soft, warm Cabinet seats it has thus far enjoyed—and onto hard, chilly opposition benches. It is the punishment for years of “going along” in conformist, conflict-free comfort—and even offering to team up with the far right Freedom Party if that would win back government positions. This half-hearted offer was ignored, however, and Austria’s new rightist rulers may even join the “Visegrád group”—Poland, the Czech Republic, Slovakia and Hungary—all united in defying the European Union (and Angela Merkel) and rejecting any and all refugees. Xenophobia—and worse—is marching on!

Most such hatred-based trends exploit the insecurity, worries and disappointment of large sections of the population, especially in formerly Communist-led regions, including the former GDR. People feel cheated—and hunt for scapegoats, almost always the wrong ones thanks to clever politicians and slick journalists with no conscience who play up every news item which leads to distrust and hatred of any “others”, especially if they speak a different language or wear different clothes.

The only effective opposition should be from the Left. Where it really fights it can really make gains, as in Britain with Jeremy Corbyn. But Corbyns are rare. Even the LINKE in Germany is divided on these issues. It agrees on defending the rights of refugees and explaining that their exodus results from the strangling of southern economies by wealthier countries in the north and military conflicts unleashed and armed by the same forces, including arms exporters like Heckler & Koch and Rheinmetall. But there is not always agreement on how many to welcome in and how best to solve resulting pressures.

Where the left can succeed in overcoming confusion and directing anger against those truly responsible for these troubles, and takes the lead in opposing them, it can make gains. But when it is considered to be part of the “establishment”, just another party which can’t be trusted, it loses even many of its earlier supporters. That is what happened in the federal election, lop-sidedly in eastern Germany but not in western Germany with its more militant leftist traditions. The only answer to current dangers, as I see it, is a fighting Left which arouses and joins other people in fights for people’s rights, with energies directed against those really causing the problems, not the refugees and immigrants. 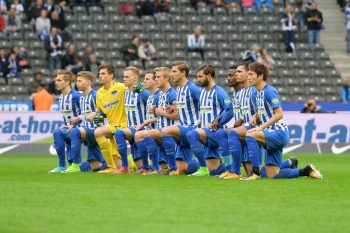 One current possibility would be to support employees of Air Berlin, now bankrupt and being taken over by its rival Lufthansa, with several thousand soon facing joblessness and despair. And also—to end with an encouraging note—to applaud Berlin’s soccer team Hertha which demonstrated solidarity in the fight against racism in the USA and among European soccer hooligans, by all “taking the knee” at the start of the game. The players (and manager) won almost universal praise in wide soccer circles, demonstrating that one can both kneel and fight at one and the same time!